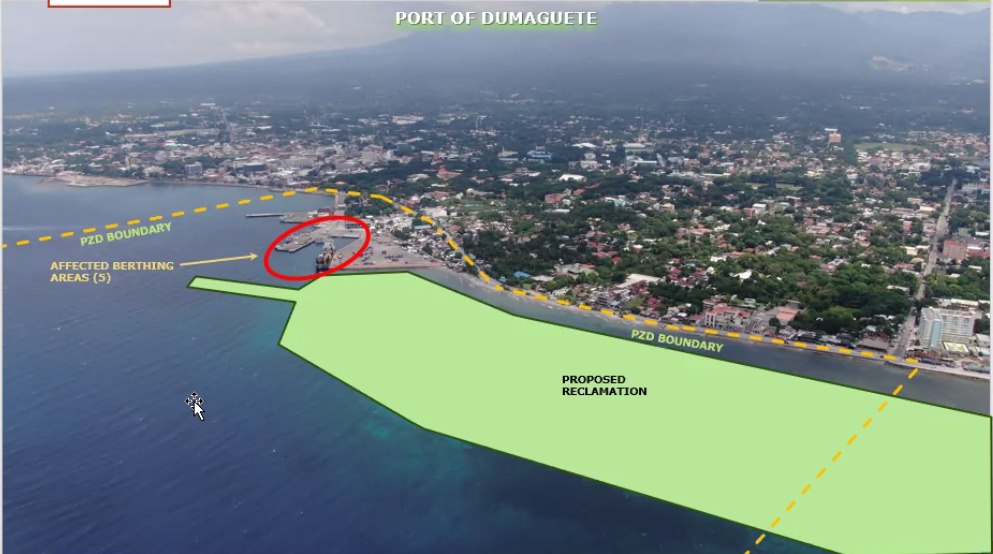 The proposed 174-hectare Smart City reclamation project off the coast of Dumaguete City “encroaching” the Port Zone Delineation of the Philippine Ports Authority, prompting them to oppose the reclamation. | PPA Dumaguete

Engr. Hubert Mitmit, Division Manager for Engineering and Services division of PPA Dumaguete, said the reclamation would “encroach” their Port Zone Delineation that was set through Presidential Declaration No. 1232 on May 25, 1998.

In an online forum held Tuesday, Aug. 3, Mitmit said the project would also obstruct navigation at the port and five of their berthing areas.

“Our stand, based on the consultation of our port manager, we object to this proposed (reclamation) project,” said Mitmit.

Lawyer Jenlyn Mediana-Arenas, also of PPA Dumaguete, said they were not consulted on the proposed reclamation.

“Considering that the project will encroach the territorial boundaries of the port delineated area. Definitely, the PPA will not issue the clearance of no objection,” Arenas said.

Lawyer Joseph Literal, Assistant General Manager for Reclamation and Regulation of the Philippine Reclamation Authority (PRA), disclosed that the city failed to submit the terms of reference required by law for the conduct of the Swiss Challenge or public bidding on the proposed reclamation project.

However, Literal said another “competitive bidding” facilitated by PRA is required if the national government was not involved in the bidding at the LGU level.

Lawyer Golda Benjamin, a law professor at Silliman University in Dumaguete and member of #NoTo174Reclamation movement, said the city’s public-private partnership selection committee should not have awarded the project to E.M. Cuerpo Inc. because the Swiss challenge was allegedly “not valid.”

“Awarding the contract without following the law is a sign that the (E.M. Cuerpo) company was favored,” she told PressOne.ph.

Certificates of no objection from various government agencies like the PPA are just one of the numerous requirements before the Department of Environment and Natural Resources (DENR) issues an Environmental Compliance Certificate (ECC) and an area clearance needed for application with the PRA. Ryan Sorote