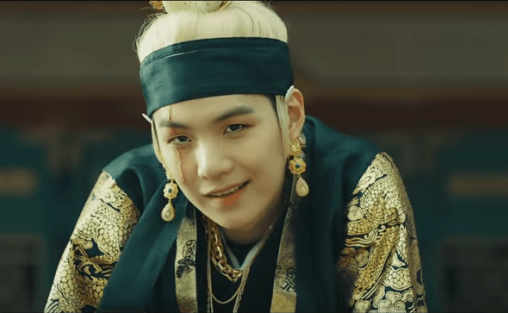 Four years and six cryptic teasers later, SUGA of BTS is back as Agust D.

For starters, Agust D is SUGA’s moniker before his debut as a member of the award-winning boy band. It’s an anagram of SUGA combined with DT (D Town), which stands for Daegu — his hometown. For fans, he’s a man of few words in most interviews, but always ready to spit fire whether it’s for a BTS album or his solo project.

Following his 2016 self-titled mixtape, ‘Agust D,’ is the surprise release of his sophomore album, ‘D-2.’ The 10-track mixtape features collaborations with MAX, NiiHWA, Kim Jong-wan of NELL and his bandmate, RM.

Complex themes and lyrics are not new to BTS’s songs, but what sets Agust D apart is the way he can show a “more raw side” to himself as he explained in this TIME Magazine interview. “It’s more that I made the music I wanted to make, rather than fixating on attempting something new,” he said.

With heavy influences of hip-hop, mixed with other genres like trap, pop, rock and R&B, D-2 is a sequel to Agust D — bolder and more mature — inspired by his own stories and reflective of the years that took him to where he is today.

The mixtape flows smoothly from one song to another. Introspective and daring, the Min Yoongi print definitely cuts deep with each song leaving you critical of your own purpose, values and existence.

With the ‘90s hip hop-inspired “Moonlight,” Agust D reflects on his growth as an artist and the hurdles he must overcome for his dreams.

“But I’m still hungry, would this be karma?
The emptiness that I feel after flying f*****g high
Although it’s been more than 10 years since I started in Namsandong,
It’s the same that my head is a mess, f**k that”
That moonlight symbolizes his direction and vision, and that doesn’t change no matter how much he grows over time.

“A lot changed in my life, but / That moonlight is still the same”

Like an epic unfolding, the mixtape goes to explore more stories of his past, how it affected his present and how it pushes him to move forward.

The title track, “Daechwita,” which literally means loudly blowing and hitting, is inspired by the Korean traditional military music played by soldiers while marching or when a king is on an outing. The track contains a sample from an actual “Daechwita” performed by the National Gugak Center Court Music Orchestra.

It tells a story of a king who rose from the bottom but is easily consumed by power, arrogance and greed (“Who’s the king, who’s the boss” / “I’m the king, I’m the boss”) only to meet a rebel who challenges his authority (“I, who has only been looking up, now would like to just look down and put my feet on the ground like that”).

One can say it’s an identity struggle — the king versus the rebel — that most of us can relate to. It begs to question our own intentions and integrity as humans.

Aside from its lyrics, “Daechwita” is a whole sensory experience — from the fusion of traditional Korean musical instruments and modern sounds to the cinematic visuals of its music video.

The next two tracks are more critical of the world and people.

With “What do you think?” Agust D takes a jab at those who have taken advantage of their name and put their fame in vain. As much as the world cares more about trivial things, he won’t bat an eyelash.

It gets deeper with “Strange” featuring his long-time friend and Bangtan-mate, RM, where they both try to make sense of the ironies in life. Wistful and magical, the piano accompaniment is perfect for alone time.

“The one who has his eyes open in the world that has its eyes closed —
Now they make him blind, isn’t it strange”

Personal growth comes with self-awareness. This is apparent in “28” that features South Korean artist NiiHWA. The song has a direct translation of “Perhaps, I’m gradually becoming an adult” according to ARMY translator, doolsetbangtan. In Korean age, SUGA is already 28 years old.

As we mature, our understanding of ourselves becomes deeper and our judgment becomes more complex.

This progress is nothing without walking over the ashes of the past, and this is the essence of “Burn It.”

Bringing in the R&B singer, MAX and his swoon-worthy vocals, its electro-pop sound has a similar ominous vibe as “Louder Than Bombs” from BTS’s album, Map of the Soul: 7.

The mysterious build-up complements a darker concept of letting go of the past — a cremation of mixed emotions he once held inside (“Let burn the past me.”)

Despite this premise, Agust D offers an important advice to all of us: “I hope you don’t forget that giving up decisively also counts as courage.” Perhaps, this is what most of us need, especially during these uncertain times.

Picking us up from those melancholic tracks is “People,” a pop ballad rich with genius wordplay as noted by doolsetbangtan.

Like his sound advice in “Burn It,” Agust D tells us that no matter what life brings, just “flow along the way the water flows.”

It’s an important note-to-self with a similar message like RM’s “everythingoes” from the mono playlist. “People” serves as a reminder that as time passes by, life goes on and you cannot live passively forever.

“Honsool,” or “drinking alone” is an activity that most people find therapeutic especially when they need to clear some headspace.

As this mixtape is a journey about growth, it’s a wise choice to include something that reflects individualism. Drinking is a celebratory activity, but most often we find ourselves thirsty for some quiet time to wash down our worries and thoughts.

“The room that is filled with silence / After finishing a shower, / I detoxify myself with alcohol / Perhaps it’s the alcohol that puts a period at the end of the day that is blurry in my memory”

For Agust D, “Honsool” is cathartic as he longs for an escape like what he repeatedly says in “Interlude: Set Me Free.”

The mixtape ends with “Dear my friend” featuring Kim Jong-wan of NELL. It’s a bittersweet outro, like a break-up you never thought you needed.

It reminds us of the relationships we have lost and let go and all the what-could-have-beens that came with them. As personal as it is, it’s brave for Agust D to share something raw and poignant to remind us that letting go also means forgiving and moving forward while holding on to the best parts of your times together.

“D-2” is a 32-minute existential ride about life and relationships that impact our growth as individuals. The cohesive flow of each track makes us listen to it without realizing we have already reached the end, only to loop it again (for streaming purposes, don’t). Agust D has done it again, leaving a lasting impression with his unimpeded songwriting and powerful musicality.