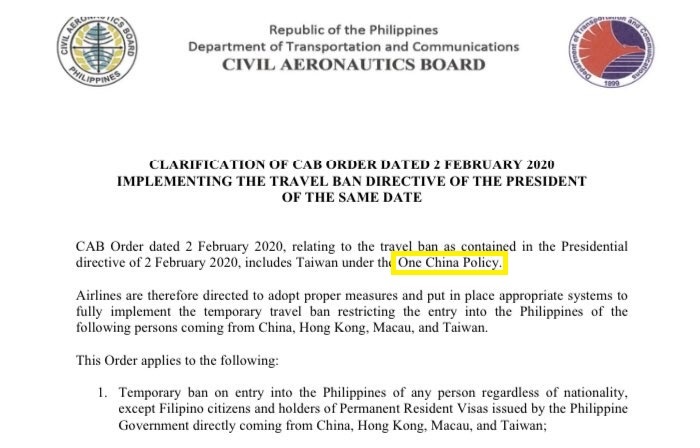 The original announcement picked up by Taiwanese news sites

Health policy collided with the so-called “one-China” policy this week when the Philippines suddenly announced that Taiwan was included in a temporary ban on travelers from China following the coronavirus disease 2019 outbreak.

After some hesitation, President Rodrigo Duterte banned all inbound passengers from virus-hit China on Feb. 2, and said special administrative regions Hong Kong and Macau were covered. Travel to China was also banned.

Government agencies were said to have been confused, and the Civil Aeronautics Board issued a “clarification” on Monday that Taiwan was included in the ban, “under the One China Policy.”

The reference to the one-China policy was later scrubbed from the announcement, in an apparent effort to preclude criticism that Beijing had a hand in the dragging of Taiwan into the Philippine ban. 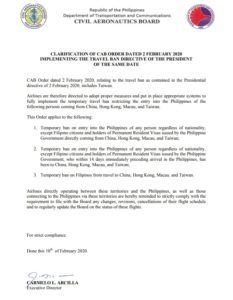 The revised announcement, with the reference to the ‘one-China’ policy removed.

But not before Taiwanese news websites got hold of the original announcement. Taiwan News reported Tuesday that as many as 500 Taiwanese were refused entry to Manila, Cebu and Kalibo and were stranded at the airports, because of the “sudden” inclusion of Taiwan in the ban.

China of course considers Taiwan — where nationalists retreated following their defeat in the hands of the communists in 1949 — a renegade province.

Manila and Taipei have economic and cultural offices with each other’s capitals in lieu of full diplomatic missions, owing to the one-China policy.

The World Health Organization (WHO) adheres to the policy, and includes Taiwan among Chinese provinces in reporting coronavirus cases.

The latest WHO surveillance report placed the number of cases in Taiwan at 18, the same as Hong Kong’s, but more than Macau’s 10 cases.

Singapore, South Korea and Japan have more, at 45, 28 and 26 confirmed cases, respectively.

For now, no travel bans have been issued on countries other than China.

Sen. Francis Pangilinan questioned on Wednesday the inclusion of Taiwan in the ban, pointing to thousands of Filipino workers in the territory.

“With the restriction, thousands of Filipino travelers have been affected — including an estimated 154,000 overseas Filipino workers (OFWs) who earn their living from Taiwan. Is the ban due to the novel coronavirus? Are there health risks posed for Filipinos going to and coming from Taiwan?” he said.

“Averting the spread of the virus and protecting the health of the Filipinos are the only justifiable reasons for the prohibition, not political considerations to China, which counts Taiwan as one of its Special Administrative Regions,” he said.

“The administration’s adherence to the so-called One China Policy should not be above the welfare of our OFWs in Taiwan who stand to lose their job and their only source of income.” (PressONE.ph)