This Ferdinand Marcos is a Robredo supporter 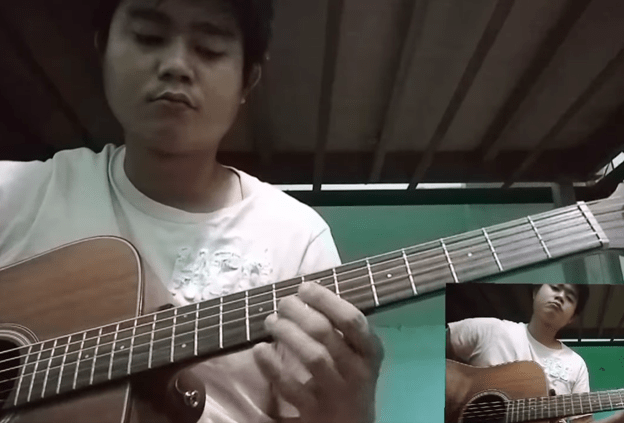 “I am the Ferdinand Marcos who is not afraid of interviews,” jests Charles Ferdinand C. Marcos while gasping for air after every few words.

He blames his nerves for his rather unusual breathing pattern; he stops in the middle of sentences, yet he persists to talk to this reporter.

Bearing the same name as two famous politicians who belong to an infamous political clan, Ferdinand recalls being the butt of jokes in his childhood.

(In my elementary days, even before I reached kindergarten, my father would joke around, he’d tell me that my grandfather is Ferdinand Marcos the president. I did not question him because I was just a kid. I was even proud at some point.)

But Ferdinand, nicknamed “Bong”, is an avid supporter of Vice President Leni Robredo – the political rival of his namesake, Ferdinand Marcos, Jr. (also known as Bongbong).

(It feels good to support someone who’s genuine, someone who has integrity.)

(When it comes to Leni Robredo, she does not only make promises – there is proof of what she has done and what she could do.)

But because he bears the same name as the controversial politician, there have been people who are keen on pointing out his “traitorous” political views.

“There was this friend of mine who told me na ‘Ferdinand Marcos ka pa naman, sumusuporta ka kay Leni’,” he narrated.

(There was this friend who told me, “you are a Ferdinand Marcos yet you support Leni.”)

“I just don’t mind them. Instead, I just turn my name into some form of sarcasm,” he said when asked what he does to hecklers he encounters on social media.

But despite coming from neighboring provinces, he admitted to not being familiar with the then-Camarines Sur representative Robredo.

“I only knew her when she ran for VP. I wasn’t really into politics back then,” he explained.

(But when I went to college, that’s when I was made aware of the truth and what has transpired in our history.)

In an interview by Amnesty International with the former dictator in 1975, Marcos, Sr. said that about 50,000 have been detained during the first few years of his dictatorship, including human rights activists, church workers, and journalists.

Despite bearing the same name, Bong does not shy away from throwing jabs against Bongbong Marcos and his infamous habit of avoiding critical journalists.

(You are hiding many things. You are running from issues in our country. If you are genuine to the people and you have nothing to hide, why won’t you face debates or interviews?)

With only a few days before the elections, Bongbong Marcos has only attended the presidential debates organized by Sonshine International Media Network (SMNI) owned by his ally, Apollo Quiboloy who is wanted in the United States.

But Bong clarified that he is not mad at Marcos, Jr. nor any of his family members.

Bong, a musician, recently posted a cover of “Rosas” by Gab Pangilinan and Nica Del Rosario that became a de facto anthem in Robredo’s rallies.

Incumbent Vice President Leni Robredo and Ferdinand Marcos, Jr. are both running for president against eight other candidates.

The Philippines is slated to have its national and local elections on May 9. — Zeus Legaspi 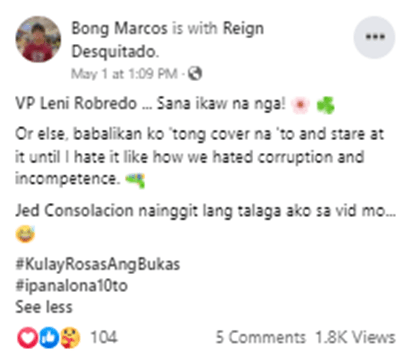