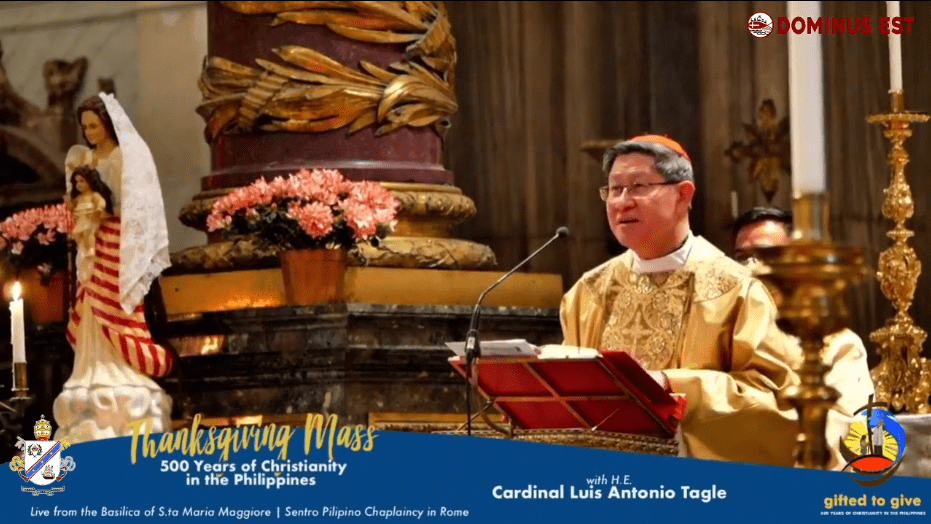 Cardinal Luis Antonio Tagle on Divine Mercy Sunday cautioned parents not to make baptism a “mere custom” but instead as a “sacrament of faith.”

“People focus more on the party and the food,” Tagle said in a Mass for the Filipino community in Rome, commemorating the first baptisms in the Philippines.

“Forget everything, even without food, but make sure to deepen the faith,” he said, referring to the Filipino tradition of celebration after someone’s christening.

Quoting Saint Paul, the prelate explained that “those who are baptized die together with Christ.”

“The sinful person-their old self dies,” Tagle stressed. “The ones baptized are resurrected as children of God, and they start their life of faith,” he said.

The cardinal said parents and godparents should do their best to help those baptized to be faithful followers of Christ as they promised in their baptisms.

Tagle, the prefect of the Congregation for the Evangelization of Peoples, also encouraged the faithful to seek “true justice” from God’s Mercy.

He explained that “true mercy” creates new communities that are “more caring” and “compassionate.”

Whoever believes in the risen Christ, he said, will succeed like the apostles whose lives were changed by the mercy of God.

“We don’t just ask for God’s mercy,” the cardinal reminded the Filipino community in Rome. “We should show it (and) share it to others.” Ryan Sorote