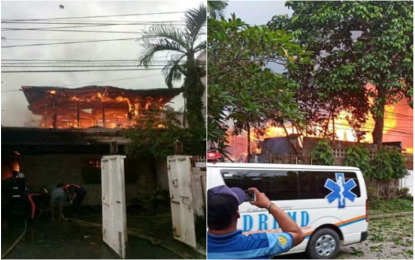 Agojo Resort in Calamba city was aflame after the crash of a twin-engine plane that killed its nine passengers and injured two resort caretakers. (PNA photo)

Calamba City, Laguna – A medical evacuation plane exploded in mid-air killing nine of its passengers before crashing into a hotspring resort village in Barangay Pansol.

He noted that the aircraft left Dipolog City airport around 1:40 p.m. Sunday but burst aflame in mid-air causing it to plunge at past 3 p.m into the private resort found inside Barangay Pansol’s Miramonte Subdivision.

The Calamba City Disaster Risk Reduction and Management Office headed by Jeffrey Rodriguez was warned by villagers of the accident when the latter spotted the plane’s burning debris landing at the Agojo Resort.

Officials are conducting an investigation as to the cause of the mid-air explosion.