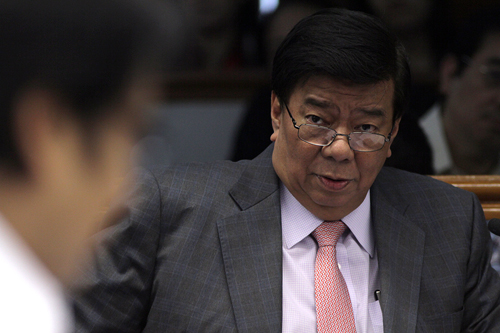 Senate Minority Leader Franklin Drilon questioned the legality of the creation of the forensic unit of the Public Attorney’s Office (PAO) calling the unit a “waste of money”.

During Monday’s budget hearing of the Department of Justice and its attached agencies which includes the PAO, Drilon said the PAO did not have the authority and mandate to create its own forensic unit.

“In my view, your forensic laboratory has no basis in law. It is not authorized by your own charter. It is a mere duplication of the functions of our investigative bodies which have not been shown to be inefficient and incompetent,” Drilon said.

PAO’s forensic lab was created in 2004 and is headed by consultant Dr. Erwin Erfe who led dozens of autopsies on the bodies of victims who died allegedly due to the controversial anti-dengue vaccine Dengvaxia. PAO filed hundreds of cases related to these deaths.

Drilon said what the PAO did was to create another unit identical in function to the work of government investigative bodies like the National Bureau of Investigation (NBI) and the Philippine National Police (PNP).  He adds that the PAO’s forensic unit was created illegally.

“The problem is, you want to be the NBI by putting up your forensic laboratory. Doctor ka na, pulis ka pa,” he told PAO chief Persida Acosta.

Drilon proposed “at the appropriate time” to transfer the budget for PAO’s forensic unit to the NBI to augment its crime laboratory.

Acosta vigorously defended the creation of the forensic unit citing the 2019 General Appropriations Act and the continuous approval of the Department of Budget and Management as her basis for creating her office’s own unit for forensic investigation.

But Drilon, who was Acosta’s former boss in the justice department, was quick to point out that the laws Acosta cited and PAO’s own charter do not grant the agency powers to create a forensic unit.

The senator insisted that only the Constitution and an act of Congress can a public office be created.

“A public office can only be created by law. You cannot create an office through the GAA,” he told Acosta.

During Drilon’s interpellation, Acosta was quick to respond cutting off the senator who was still speaking.  This eventually irked Drilon who, at one time yelled “Wait!” so Acosta would stop from interrupting him. Senator Sonny Angara, who is the Senate Finance committee chair, had to interject to remind Acosta saying “The chair will interrupt if the answers are not responsive.”

Drilon reminded Acosta that there is no enabling law that would support the creation of the PAO’s forensic unit but Acosta kept citing the provisions in the General Appropriations Act (GAA) of 2019 as her basis.

Drilon once again reminded Acosta that the 2019 GAA was delayed and that President Rodrigo Duterte signed the law in April only which makes the forensic lab’s budget in January 2019 delayed as well.

Angara said that “it’s a fact” that the 2019 GAA was delayed. “We can all take judicial notice, or legislative notice of that, it was in the news,” Angara said.

Realizing Drilon’s point, Acosta told Drilon she now understood what the senator was driving at which led Drilon to say “Lahat nakakaintindi, ikaw na lang hindi (everyone understands, except for you).”

Drilon also raised the issue of vaccine scare, which was said to have been caused by PAO’s handling of the Dengvaxia controversy.

“The common concern in the medical profession and the health department is the loss of confidence is principally attributable to all the noise created by the PAO,” Drilon said.