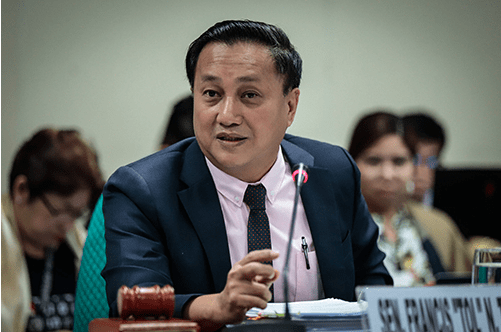 With international travel limited by the coronavirus disease 2019 (Covid-19) pandemic, a senator blasted the Office of the Solicitor General’s (OSG) request to increase its foreign travel budget for 2021.

The OSG is requesting an additional P21.4 million budget for foreign trips.

The Department of Justice and its attached agencies have a combined proposed budget of P22.57 billion for 2021 which includes the OSG foreign travel budget which according to Tolentino ballooned to 87.75 percent.

“Eh kasagsagan pa po next year ng COVID-19, saan naman po tayo magpo-foreign travel?” Tolentino asked Angeles, who appeared during the budget hearing in behalf of Solicitor General Jose Calida who did not attend the hearing on his doctor’s advice.

Tolentino was wondering why the OSG asked for an increased foreign travel budget when the senator believes that foreign travel will still be limited even by 2022.

Tolentino also grilled the OSG for the alleged lucrative allowances and other perks that Calida has been receiving from various government agencies the OSG is representing in various cases for the past two years .

Calida was the second highest-paid government official with a total income of P16.9 million based on the Commission on Audit’s (COA) 2019 annual report.

Angeles defended Calida’s allowances from client agencies saying these are allowed under Executive Order No. 292 series of 1987 or the Administrative Code of 1987.  However Tolentino debunked this stressing that the allowances received cannot exceed 50 percent of the annual salary pursuant to COA’s Memorandum Circular No. 85-25E.

“Apparently the Solicitor General has defied the COA memorandum circular. Can you explain that, Atty. Angeles? Remember Mr. Angeles that COA is a constitutional office,” Tolentino reminded Angeles.

Angeles said the OSG is appealing the matter before the COA.

Tolentino also did not like Calida’s absence during the budget hearing.  He noted that Supreme Court Chief Justice appeared before the Senate to defend the Judiciary s budget.

The pro-Duterte senator also questioned why the OSG is participating in preliminary investigations in criminal cases and other fact-finding inquiries,  a role not part of the OSG’s mandate which is to represent the government in cases before Court of Appeals (CA) or in the Supreme Court.  Rommel F. Lopez