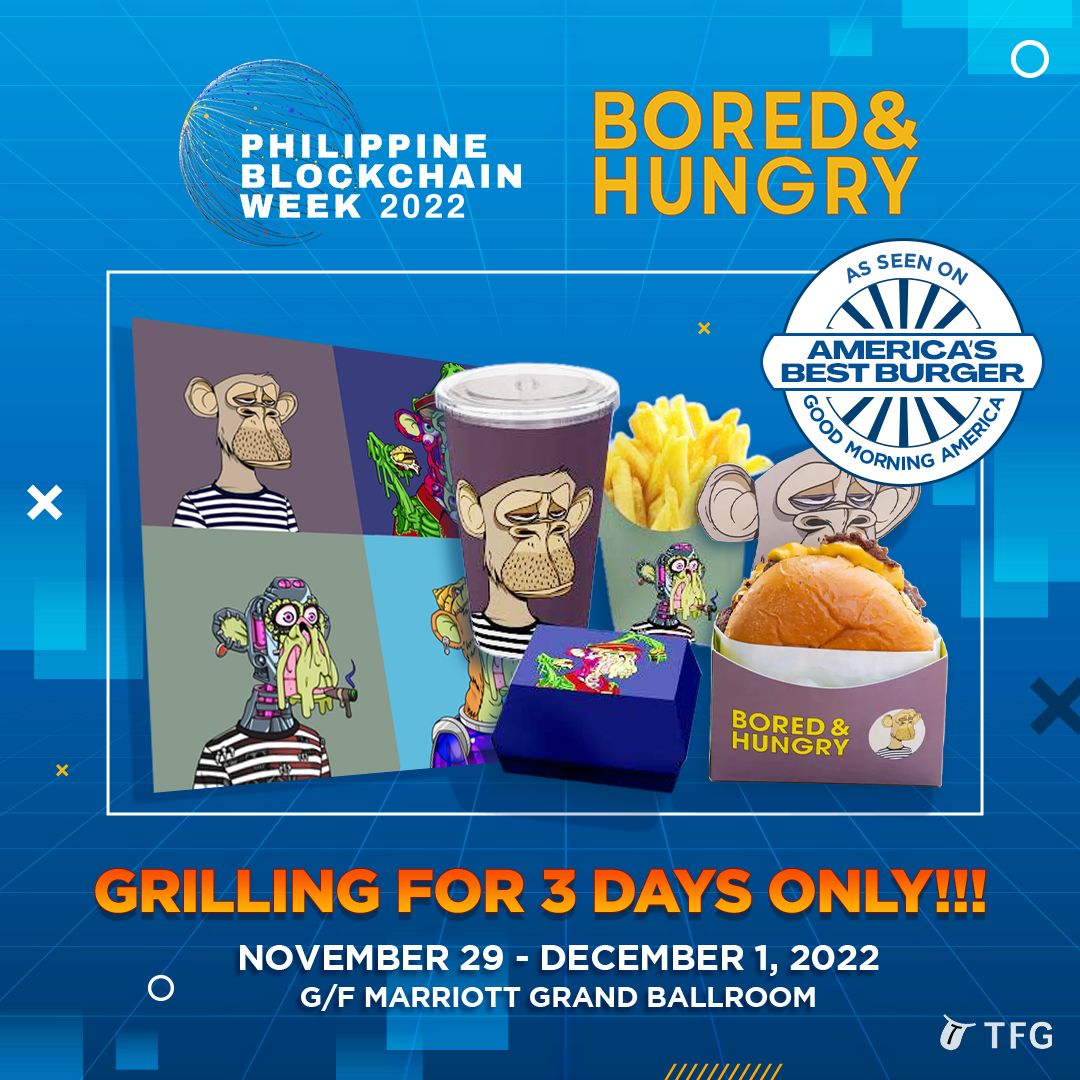 Oscar G. Tan-Abing, Jr., one of the convenors of the event and founder of Anotoys Collectiverse, shared that Bored and Hungry, in association with restaurateur Charles Paw’s Tasteless Food Group, will be flying its chefs to the country and deliver the “best burger experience” to Filipino NFT and non-NFT enthusiasts alike.

The first Bored and Hungry was supposed to be just a pop-up store. As it attracted lines of customers each day, the company decided to make the restaurant a permanent one.

“The Philippines is the first Southeast Asian country that will have the Bored and Hungry pop-up store. The country is really a very important market for NFTs and Web3,” he said, noting that FFU has only two locations so far, one in Long Beach, California and soon in Gangnam, South Korea.

The Bored and Hungry pop-up store will be located at the lobby of the Marriott Grand Ballroom in Newport World Resorts, Pasay City and will be open for only three days, from Nov. 29 to Dec. 1.

“People who are attending the conferences can bring their family and friends along to experience Bored and Hungry,” Tan-Abing said.

Apart from burgers, Bored and Hungry fans will get the chance to enjoy one of the first officially licensed BAYC phygital (physical and digital) merchandise in the country from Anotoys Collectiverse through their collaboration with BAYCkada.

The Biggest Names in Web3

Tan-Abing also revealed that Bored and Hungry co-founder Andy Nguyen himself will be coming to the event and will have a private audience with the Ape community and several other blue chip NFT communities. Nguyen is behind some of the most popular restaurants in the U.S. like Afters Ice Cream, Hello Kitty Cafe Las Vegas, Trill Burgers, Matte Black Coffee, and Dough & Arrow, among others.

“PBW is bringing only the best. It’s truly an exciting time for NFT enthusiasts in the country,” he said.

For tickets, conference schedules, and other information about PBW, visit www.philippineblockchainweek.com.