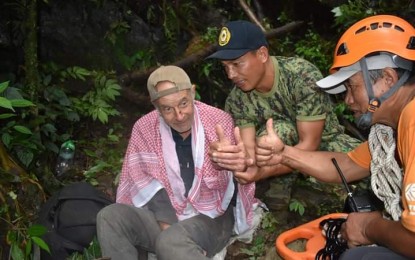 French tourist Jacques Francioly, 70 (leftmost) is attended to by rescuer personnel after he was discovered in a ravine in the forests of Barlig town in Mountain Province after being declared missing for eight days. (Photo courtesy of Barlig PNP)

A team of rescuers found in a ravine the French tourist who was reported missing for eight days after hiking in a forest in a Mountain Province town.

Jacques Francioly, 70, was located by a joint effort of tour guides and local disaster risk reduction management and tourism offices and police, who scouted the whole area until he was found in a ravine around 3 p.m. at Sitio Sikling, Barangay Latang, according to Lt. Morris Pangket Nay-osan of the Barlig police.

“He was very weak and in need of special attention when he was found,” Nay-osan added.

Francioly was immediately rushed to a local hospital and will be transferred to the Luis Hora Memorial Regional Hospital in Abatan, Bauko, Mountain Province for further medical help when his condition stabilizes.

The tourist checked in at Halfway Inn and Restaurant at Barangay Gawana on January 13. He went missing on January 21.

A search and rescue operation was ordered by Mayor Clark Ngaya to locate the whereabouts of Francioly.

In a similar situation, Choi Sungkyu, 57, a Korean national, went missing in June 2017. The tourist was found by the rescuers 11 days later.

Nay-osan encouraged all tourists to follow the rules and regulations for their safety. (RJ Espartinez)