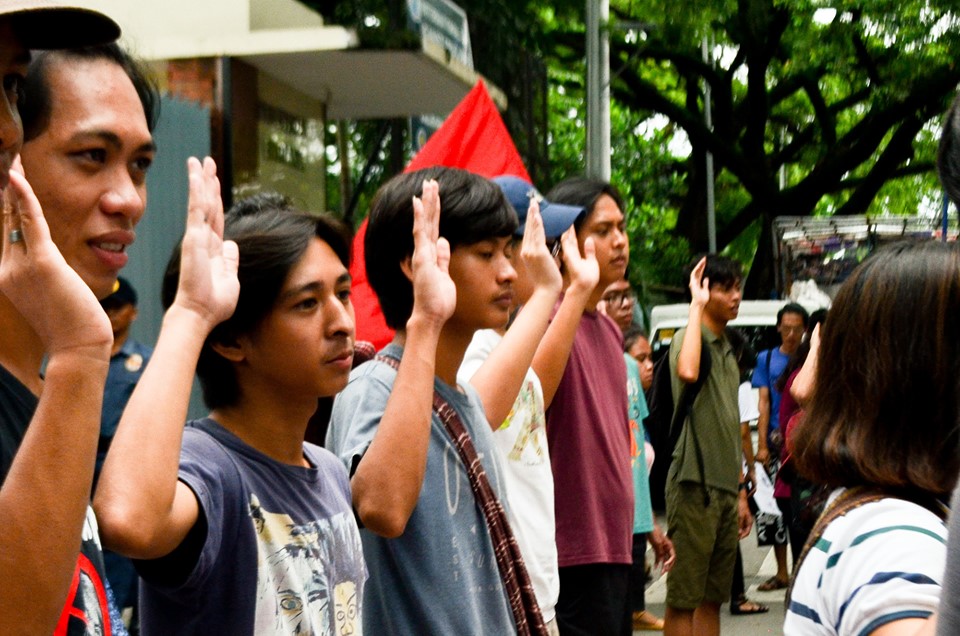 Anakbayan members are shown during a protest against the proposal for mandatory military training on Aug. 1. FROM ANAKBAYAN FACEBOOK PAGE

Defense Secretary Delfin Lorenzana on Thursday described as “abhorrent” the supposed deceptive recruitment of young people into alleged “legal front organizations,” claiming that the ultimate objective was to enlist the recruits into the communist rebellion.

The statement came a day after a Senate hearing in which Sen. Ronald dela Rosa, a former police chief, presented parents of the young recruits, who said their children went missing after joining the Anakbayan leftist youth group.

Lorenzana said the recruitment in campuses was nothing new.

“Using ‘legal front’ organizations that purportedly advance the people’s democratic rights, they have freely operated in democratic spaces such as campuses and vulnerable communities to lure our citizens into joining sectoral organizations and eventually, the armed movement,” he said in a statement.

Lorenzana said several former rebels undergoing psycho-social assessment had attested that they had fought the government since they were 14 or 15.

“That is why the defense and military establishments are very vocal against the deceptive recruitment of young Filipinos in our schools and other institutions, and strongly condemn the abhorrent practice of using children in armed conflict,” he said.

In a statement on Thursday, Anakbayan called dela Rosa’s hearing a “sham” and a throwback to the McCarthy communist witch hunt era in the United States.

“LET US CUT THROUGH THE LIES: There are no missing minors. All those purported to be ‘missing’ are above the age of 18. Joining Anakbayan is a purely voluntary act of every single member, done of their own free will and volition. Every member is free to join and leave at any time,” Anakbayan said.

“Anakbayan is a legitimate youth organization on the front lines of organizing and mobilizing against acts of injustice, tyranny, violence, exploitation, and oppression on the Filipino people perpetrated by the state, the ruling elite, huge landlords, greedy capitalists, foreign imperialists, and their private henchmen and the mercenaries in the AFP and PNP,” it added. (PressONE.ph)