Lockdown on parts of Agoncillo and Laurel towns in Taal lifted 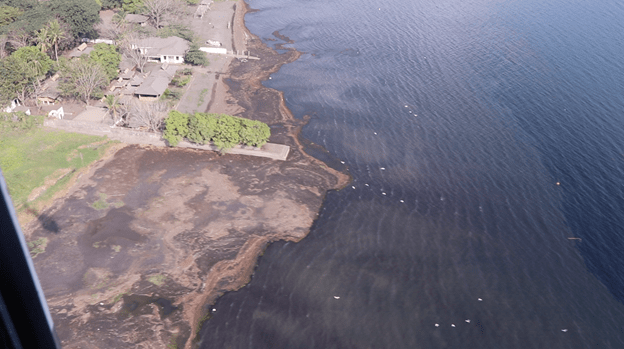 An aerial view of Barangays Bilibinwang, Subic Ilaya and Banyaga in the town of Agoncillo, which have remained locked down as they are within the seven-kilometer danger zone.  Taal Volcano is on alert level 3  (PIA photo)

Parts of the towns of Agoncillo and Laurel had been re-opened yesterday to its residents by Batangas Gov. Hermilando Mandanas as the alert status of Taal Volcano was lowered from 4 to 3 last Sunday.

Only those residing in the six barangays within the seven-kilometer radius danger zone  were not allowed to return.  These are the barangays of Bilibinwang, Subi Ilaya and Banyaga in Agoncillo and Barangays Gulod, Buso-buso and Bigaan East in Laurel.

Mandanas pointed out that returning to their homes is an option given to their constituents residing beyond the seven kilometer radius as staying in evacuation centers is still recommended due to the prevailing presence of hazards on health, destruction of properties and loss of means of livelihood.

Those who decided to remain in evacuation centers have no other place to go as their houses were destroyed.

The Department of Public Works and Highways (DPWH) and the local government have also started clearing the roads from the volcanic ash.

Interior Secretary Eduardo Año said he will back up the proposal to permanently prohibit residents from occupying the 14-kilometer radius around Taal volcano to ensure the long-term safety of the residents.

This calls for a law and a budget for the relocation of residents and also local government centers that span. (Jojo Mangahis)​