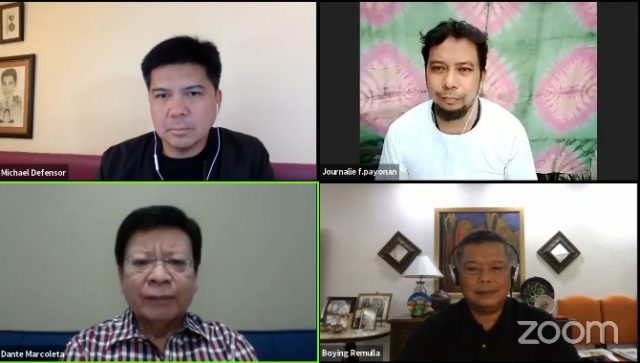 Lawmakers say that the plan of some congressmen to forcibly take ABS-CBN’s properties are “unconstitutional”, “out of line” and part of “sinister plot” to put ABS-CBN out of business so that the Lopezes will be forced to sell it to Duterte’s “anointed buyer”

Senate President Vicente “Tito” Sotto III on Thursday slammed the plans proposed by some members of the House of Representatives to seize ABS-CBN’s headquarters in Quezon City.

“Takeover ABS CBN property? Private property is constitutionally protected. Possession is given weight. There is a venue, the courts; and there is due process,” Sotto said on his Twitter account.

Takeover ABS CBN property? Private property is constitutionally protected. Possession is given weight. There is a venue, the courts; and there is due process. Bawal judgemental!

Similarly, Senator Richard Gordon believes the congressmen were “out of line” for discussing the take over of ABS-CBN’s properties after the shutdown.

“I don’t think they can confiscate the properties of the ABS-CBN without due process of law. They cancelled the franchise,” Gordon said.

“ABS-CBN is free to own it. Hindi naman puwede agawin ang physical properties ng ABS-CBN. I think they are out of line there,” he added.

In an interview with the Inquirer, Albay Rep. Edcel Lagman said that the “sinister plot” is to put ABS-CBN out of business so that the Lopezes will be forced to sell it.

“It appears the sinister plot is to oust ABS-CBN from business by denying its franchise renewal so that it can be coerced to sell the network to an anointed buyer.”

The minority congressman added that “ABS-CBN’s bid for a fresh franchise was consigned to the dustbin for malevolent motives exposing the pretense of ‘neutrality’ and ‘fair play’ by the Duterte administration and the House leadership.”

“After infringing [on] press freedom, now the right to private property is being assaulted,” Lagman said.

During a Zoom meeting on June 20, Deputy Speaker Rodante Marcoleta (Sagip party-list), Deputy Majority Leader Jesus Remulla (Cavite), Rep. Michael Defensor (Anakalusugan party-list) and Rep. Yedda Romualdez (Tingog Sinirangan Party-list) openly discussed going after ABS-CBN for what they viewed as violations of the beleaguered broadcast network, proposing to impose a imposing P1.97-trillion fine and seizing the broadcast giant’s facilities and sprawling headquarters in Quezon City for use of the government.

Although government agencies invited to the series of hearings of the House Committee on Legislative Franchises on the network’s franchise said that ABS-CBN did not commit any of the accusations hurled against it by House members opposed to its franchise , 70 members of the House committee voted to deny ABS-CBN’s application.

Throughout their virtual meeting, President Rodrigo Duterte’s allies in the Lower chamber repeated the same unproven allegations they threw against ABS-CBN during the franchise hearings one of which is Marcoleta’s claim that the Lopez’s do not have the titles to prove they own the lot where the ABS-CBN headquarters are located.

Marcoleta, a known member of the Iglesia ni Cristo, said ABS-CBN has titles only for a 42-sq.m. lot and not the entire 44,000 -sq.m. complex housing the broadcast giant’s headquarters.

Marcoleta even boldly said during one of the committee hearings that the opinion of the government regulators does not “matter here” but the “will of Congress”.

“Contrary to the ABS-CBN’s submission, it is not the view of the SEC that matters here. It is not the opinion of the DOJ that will prevail here, not even the Bureau of Immigration or other agencies. It is the will of Congress that should be accorded due respect simply because it is Congress that has the sole and ultimate authority to grant or deny the application of franchises,” he said.

Recently, Camarines Sur Rep. Luis Raymund Villafuerte filed a resolution proposing the government to use the network’s former radio and TV frequencies for distance learning during the pandemic.

Villafuerte, one of the 70 congressmen who voted to kill ABS-CBN’s franchise, also asked the Lopez family to sell ABS-CBN if it cares for its 11,000 employees whose jobs are in peril after the franchise denial vote.

“Bottomline, my suggestion to the Lopez family, they just sell the corporation. If they really love the 11,000 employees or more and they really want to serve the Filipino people, ibenta na lang iyong kumpanya,” he said.

Days after the House vote, ABS-CBN announced that it would cease the operations of some of its businesses and lay off workers effective August 31, 2020

Villafuerte’s call is the same made by Duterte back in December 2019 who warned the Lopez family to just sell the network.