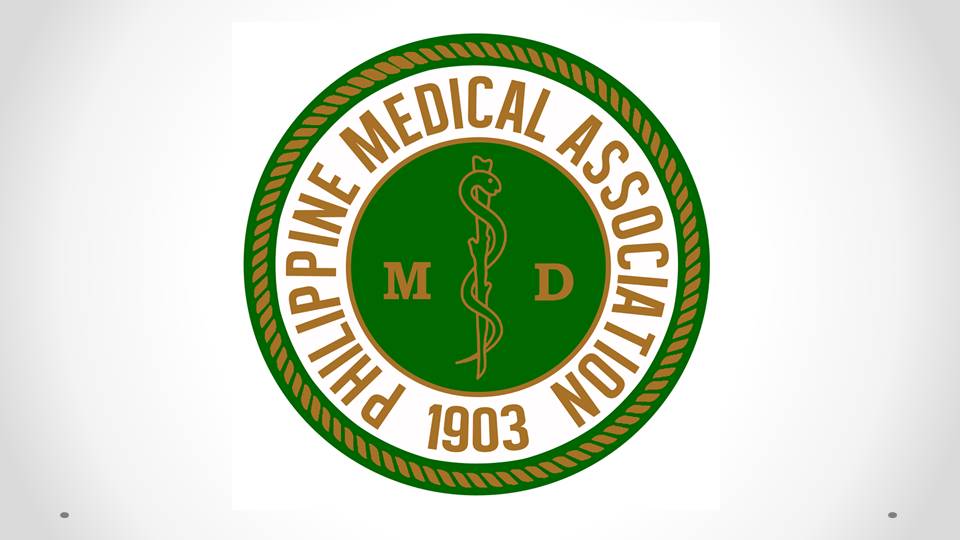 The Philippine Medical Association (PMA), the country’s largest group of medical professionals, denounced Cebu Governor Gwendolyn Garcia for advocating “tuob” (steam inhalation) as a solution to the coronavirus disease 2019 (COVID-19), and for using her live virtual presser to publicly shame doctors who criticized her.

The PMA condemned Garcia in a three-page statement dated June 24, 2020.

Garcia called out two “young” doctors who criticized the governor’s decision to promote the traditional steam inhalation to employees of the Cebu Capitol as a means to alleviate symptoms of COVID-19. Garcia was also fuming against one of the doctors who for saying “maybe she [Garcia] wants to be slapped” as a threat against her. Aside from the threats to slap her, Garcia called out the doctors in a separate statement, for their comments to burn down the Capitol and cremate the workers doing tuob.

However, the 84,000 strong licensed doctors of the PMA denounced the governor for her ‘personal attacks’ against the doctors and denouncing her “tuob” advocacy as ‘recklessly imprudent’.

“The Philippine Medical Association, which is the umbrella organization of physicians in the Philippines, denounces the recklessly imprudent assertions as well as the personal attacks made by Cebu Governor Gwendolyn F. Garcia in the video she released on June 23, 2020,” PMA said.

The statement, signed by PMA president, Dr. Jose Santiago Jr., and its secretary-general, Dr. Ricardo Batac, said Garcia “belittled some doctors who took exception when she promoted the practice of tuob to treat coronavirus disease 2019 (COVID-19).”

“Gov. Garcia cannot insist on a remedy that is not only unsupported by science, but is actually likely to have adverse consequences. This is counterproductive, irresponsible, and dangerous. As a public figure, her statements carry weight among her constituents. It behooves her to ensure that her actions do not result in harm,” the PMA stressed.

“In the same manner, it is the responsibility of the PMA and all concerned parties to call out harmful statements that will adversely affect the public health and cause an increase in active cases. When doctors fulfill this duty, it should not result in personal attacks, especially from one who is supposed to be a public servant.”

The PMA added that with the health facilities in Cebu are “already swarmed” with both confirmed and suspected CoViD-19 cases, Garcia’s “demoralizing and unfair tirade against frontliner physicians and worsens an already difficult situation.”

“Instead of thanking them for their priceless service and their good faith in promoting the correct safeguards and health protocols, she attacked their integrity and good name. This is completely unacceptable,” they said.

The Department of Health (DOH) also issued a statement cautioning the public of using unproven treatments and therapies such as tuob.

In an online press briefing, Health Undersecretary Maria Rosario Vergeire even cautioned the public that such therapies may lead to accidents.

Vergeire also cited both the US Center for Disease Control and Prevention and the World Health Organization, which issued statements saying that steam inhalation cannot cure the respiratory disease.

Netizens were quick to react to Garcia’s tirades.  #NoToDoctorShaming and Cebu Governor Gwendolyn Garcia were top trending topics in the Philippines on Twitter on Wednesday, June 24, 2020 with netizens roasting Garcia on social media.

Cebu Gov. Gwen Garcia publicly shamed a doctor because of criticisms against the mandate of implementing “tuob” or steam inhalation as a medication for “possible covid symptoms.”

An excerpt from her FB live. Such familiarity. (shaming starts 42:00): 🔗 https://t.co/JMM5JODK6p pic.twitter.com/zdxRdex8Aw

Gwen Garcia is now resorting to doctor-shaming only because the doctor expressed an opinion against “tu-ob,” then dares her to run for election. What’s happening to our leaders that they have become shameless bullies?
People of Cebu go check and balance her.#NoToDoctorShaming https://t.co/DG5Au9efFK

I feel deeply hurt from all the criticisms doctors are getting for rectifying misconceptions about steam inhalation or “Tuob.” Please don’t invalidate all our hardwork just because you think we only have a “two-year” experience presently. We are not your enemy. #NoToDoctorShaming pic.twitter.com/LCStxLSigs

This is what happens when we live in a world that’s resistant to true knowledge and facts.#NOTODOCTORSHAMING pic.twitter.com/FnGDoskWeS

Garcia: We’re in a democratic country. We can choose the treatment we want.

Responding to the PMA and DOH statements, Garcia said in a press conference that there was nothing to fight about the doctors’ statement.

“I think, in so far as steam inhalation is concerned, of course, we must be very careful. We cannot just allow boiling water to pour all over us. But I don’t think I have heard of cases of (people) getting scalded unless you are careless,” Garcia said.

Garcia added the public should be given the choice if they would want to practice tuob on top of health experts’ recommendations against COVID-19.

“It’s my personal experience. It may be different from one person to another. I am just sharing this because we are allowed to do that, can’t we? Pwede na man di ba?” she said.

“On the other hand, if people, who don’t have symptoms at all, or people who would rather choose to subject themselves to that [tuob] because there are those who cannot afford to go to the hospital, I think this is still a democracy,” the governor added.

However a screenshot of a memorandum issued to Cebu Capitol employees show that employees are required to strictly follow the governor’s directive to practice steam inhalation in their workplaces. 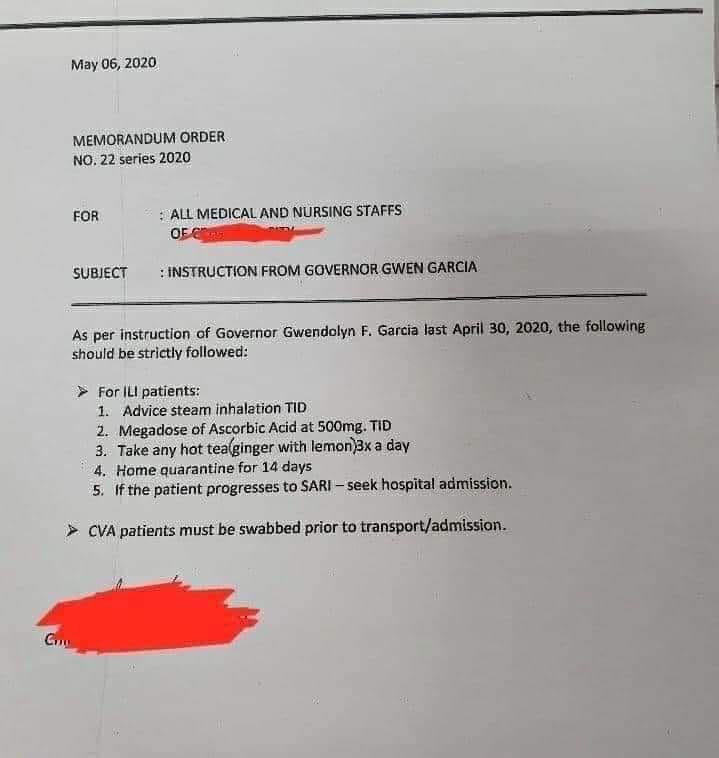 Copy of the Cebu Capitol memo to employees instructing them to practice steam inhalation as a means to fight COVID-19. The memo used the words “the following should be strictly followed”

Garcia used her virtual presser to publicly berate the doctors who criticized her tuob advocacy even daring them to run for office in the next election.

“Yes, you, what have you contributed? Next time, if you want to criticize us, run (for elections). It’s really okay. Maybe you’re more knowledgeable about ‘aeorosolization.’ You run next time. Because you think of us as bizarre leaders. Well, if you are looking down on me, no one’s stopping you from running for office,” Garcia said in Cebuano, address a certain Dr. Candy Krista Abrera Pilapil who criticized Garcia’s memo on tuob.

This is not the first time Garcia publicly humiliated her critics.

Back in May, the Commission on Human Rights slammed Garcia for publicly shaming a netizen who criticized and insulted Garcia and the provincial government for their COVID-19 response.

Garcia held a briefing on May 18 where she gives the latest updates on the coronavirus situation in the province.

During the briefing, she pulled out large sheets of paper where Facebook comments critical of her were printed on it.  The same comments were shown on the screen and streamed online through Sugbo News, the province’s public information office.

Garcia then proceeded to reveal the barangay where the netizen who criticized her resided, that she was separated from her first husband and wasn’t married to her second husband, and had 7 kids from 2 different men.

“It is a cause for concern for CHR, especially that some personal information of the commenter was disclosed to the public,” CHR spokesperson Jacqueline de Guia said in a statement.

“[The info] included her full name, barangay of residence, and relationship history among others. The Governor even made personal remarks on the physical appearance of the woman based on the photos posted on her Facebook account,” De Guia added.

“We seek to remind public officials—elective or appointive—that they are bound by high standards of ethics in public service,” the CHR added.

“They must perform their duties with utmost responsibility, integrity, and respect and shall be accountable to the people they are serving,” the CHR reminded Garcia.