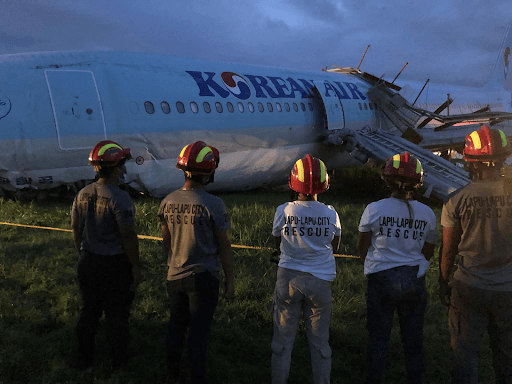 Local rescuers at the crash site of KAL 631 after it overshoots the runway Sunday, Oct. 25, 2022. | CONTRIBUTED

Operations at Mactan-Cebu International Airport (MCIA) have been suspended since Sunday night after a Korean passenger airplane overshoots the runway.

Nagiel Banacia, chief of the Lapulapu City Disaster Risk and Management Office said all of the 162 passengers and 11 crew of Korean Air Flight (KAL) 631 are safe.

“Airport operations remained suspended as of 11 pm Sunday for the ill-fated aircraft remained stocked about 300 meters away from the end of runway 04,” Bañacia said.

“The incident has necessitated the temporary closure of the MCIA runway to allow for the safe removal of the aircraft,” MCIA said in a separate statement. “For now, all international and domestic flights to and from MCIA are canceled until further notice.”

Initial reports blamed heavy rains experienced in Cebu might have caused the A330 aircraft to overshoot.

The MCIA and the Civil Aviation Authority of the Philippines are closely working with Korean Air in the ongoing investigation. 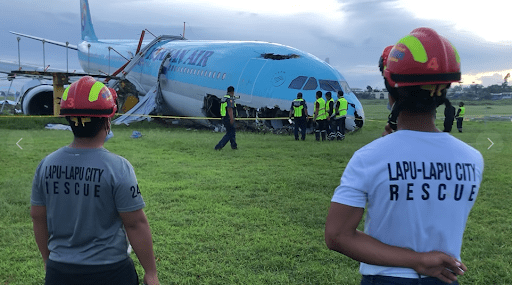 “Passengers with flights to and from MCIA are advised to coordinate with their respective airlines first before proceeding to the airport,” the airport advised the public.

In a statement, Korean Air president Keehong Woo on Monday apologized for the “incident” involving KA631.

Keehong said they are coordinating with local aviation authorities to “determine the cause of the event.”

“Korean Air expresses its genuine regret as we always prioritize safety in all of our operations. We are truly sorry for the stress and inconvenience brought to our passengers,” the statement said.

The airline reiterates its commitment to ensuring the safety of its operations by instituting measures to prevent such recurrence.

“Our overall goal is for our valued guests to trust Korean Air to treat them right and give us an opportunity to welcome them once again,” it added. – Ryan Christopher J. Sorote