FACT-CHECK: There is no new design for the P500 bill, yet 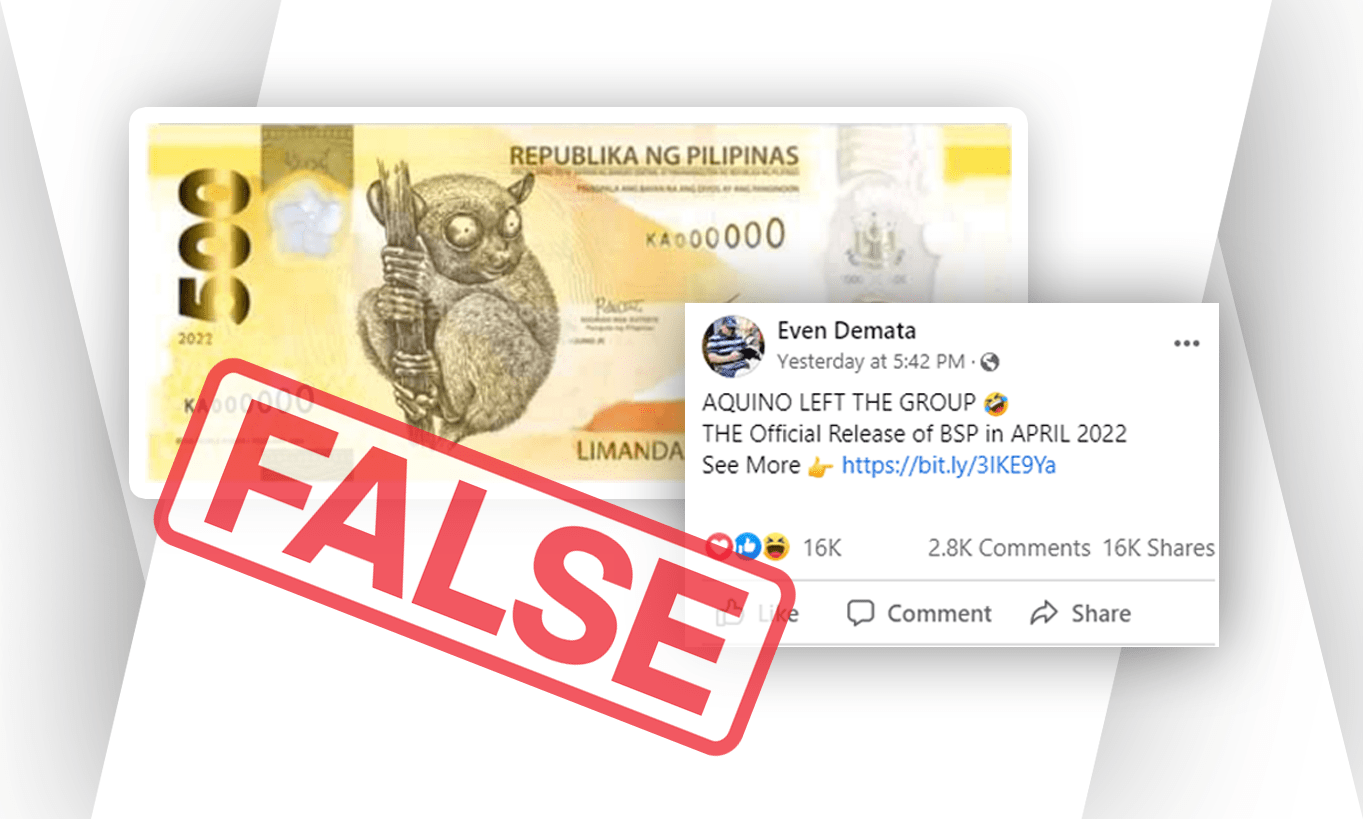 A screenshot of the alleged new design of the P500 bill shared by Even Demata Facebook Page.

CLAIM: The BSP has issued a new design for the P500 bill and the Philippine tarsier has replaced Ninoy and Cory Aquino in the banknote.

A number of Facebook pages and accounts have been spreading an image  of the new design of the P1,000 bill along with the alleged new design of the P500 bill where the faces of democracy icons, the late senator Benigno “Ninoy” Aquino and his wife, the late President Corazon “Cory” Aquino, were replaced with the image of the Philippine tarsier.

The posts claimed that the Bangko Sentral ng Pilipinas (BSP) had released the new designs of the P1,000 and P500 bills.

This supposed new design of the P500 bill and the claim that the BSP released it are both  FALSE.

The post of the Even Demata FB Page generated 16k reactions, 2.8k comments and was shared 16,000 times. It also contains a link, that instead of giving more information about the new bills, leads to the website of online shopping site Lazada.

On Dec. 11, the BSP announced the new design of the P1,000 bill, with the likeness of the Philippine eagle replacing the faces of World War 2 heroes Justice Jose Abad Santos, Brig. Gen. Vincente Lim, and Girl Scouts of the Philippines founder Josefa Llanes Escoda.  All three were executed by the Japanese during the war.

The new banknote, made from water- and dirt-resistant polymer, is said to be hygienic. It will also have new security features. The BSP did not release any statement or showed any photo of the redesigned P500 bill.

BSP Gov. Benjamin Diokno earlier said the design of the P1,000 bill was approved by the National Historical Commission of the Philippines.  He added that the Monetary Board and the Office of the President approved the issuance of the new limited polymer or plastic bills which will be rolled out by the fourth week of April 2021.

The BSP chief said it would be testing the use of polymer banknotes due to their supposed durability. The current bills use abaca fibers.

Diokno said that since the P1,000 bill was the most in-demand and the most forged, it was the first logical choice to be given additional security features in the existing series of banknotes.

Asked by reporters if the P500 bill, which features Ninoy and Cory Aquino – would also be replaced, Diokno said that “no such discussion went into the MB decision-making process” though he admitted that the new series of banknotes would “focus on fauna and flora in the Philippines.” –  Rommel F. Lopez