FACT-CHECK: The Philippines used to have a local TV and radio brand until the Martial Law of Marcos destroyed it

A social media post claims that the Philippines was making its own radio, television, and cars before known brands now in Japan, South Korea, and China. 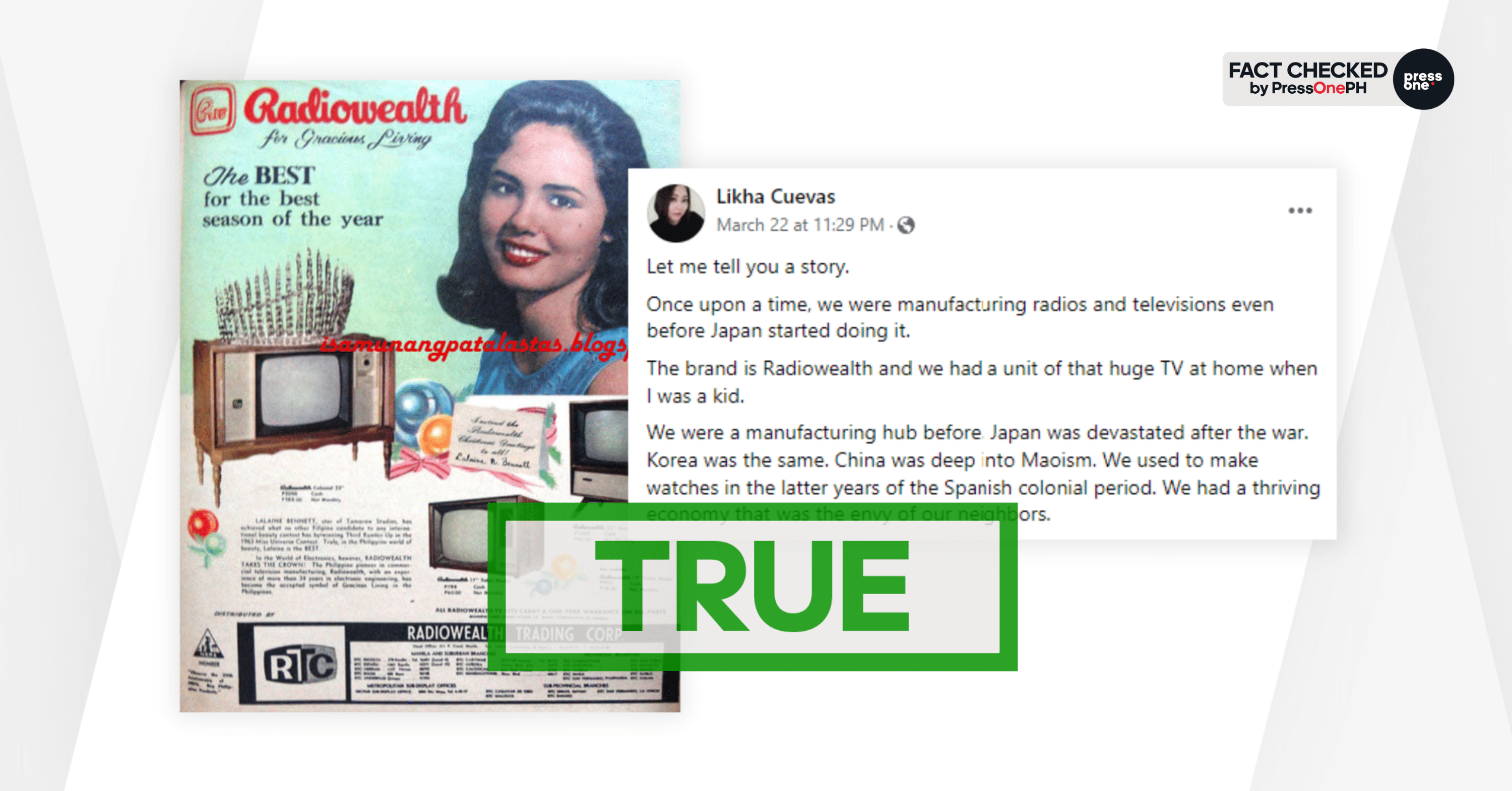 CLAIM: The Philippines had a promising local electronic and automotive industry but was cut short when Martial Law was declared.

Financial journalist Likha Cuevas-Miel claimed in a social media post on March 22, 2022, that the Philippines was locally manufacturing radio and television sets way before Japan.

The post, which told the story of Radiowealth, a Filipino company and well-known brand in the 1950s –  has been shared over 5,500 times generating 6,800 reactions.

Cuevas wrote that through Radiowealth’s founder Domingo M. Guevara, the country became a “manufacturing hub” before Japan and Korea which were devastated by war, and China  which was at the height of Maoism.

“We had a thriving economy that was the envy of our neighbours,” she claimed, quoting an article originally published by isamunangpatalastas.blogspot.com.

“But then Ferdinand Marcos Sr. came. And grabbed power,” it added.

This claim is verified TRUE.

Both Philstar.com and the Manila Bulletin corroborated and confirmed this fact. In articles published in 2013, both news organizations noted that Radiowealth was “a brand of affordable Philippine-made radios, TVs, and other appliances” that dominated the market before foreign brands came to the country.

Guevara was also a pioneer in the Philippine automotive industry after he was allowed by Volkswagen Germany to assemble the more fuel-efficient Beetle and Kombi which at the time were in demand in the country directly competing with imported gas guzzling US-made cars.

But when Martial Law was declared, Guevara’s plans and vision for his ventures started to plummet. As an industry delegate of the 1971 Constitutional Convention, he was among the seven delegates who voted against the “martial law constitution.”

Cronies of the late dictator Ferdinand Marcos sought shares of his companies “without the benefit of payment.” At first, he persisted until he “withdrew from his business” and went into self-imposed exile in the US.

One of Guevara’s surviving companies – RFC Financing confirmed on its website that its appliance and car companies closed at the height of the Martial Law regime in the 1970s.

RFC Financing in the 1980s was rehabilitated after the fall of the dictatorship.

The late National Artist for Literature, Nick Joaquin, praised Guevara’s legacy.  “There is no question that at the start of the 1970s, the Philippines was poised (to become a Newly Industrialized Country)”, he wrote, and that Guevara was a trailblazer in attaining this lofty ambition for the country.

As a tribute to him, Libertad Street in Mandaluyong City, Metro Manila, was renamed after Guevara as a reminder of his contributions and what the country would have been if his ventures survived and did not become a casualty of greed of the kleptocrat known as Ferdinand Marcos. – Ryan Christopher J. Sorote