FACT CHECK: Pacquiao, de Lima not convicted in any case

Senators Manny Pacquiao and Leila de Lima have no prior civil or criminal conviction contrary to what Pastor Apollo Quiboloy said. 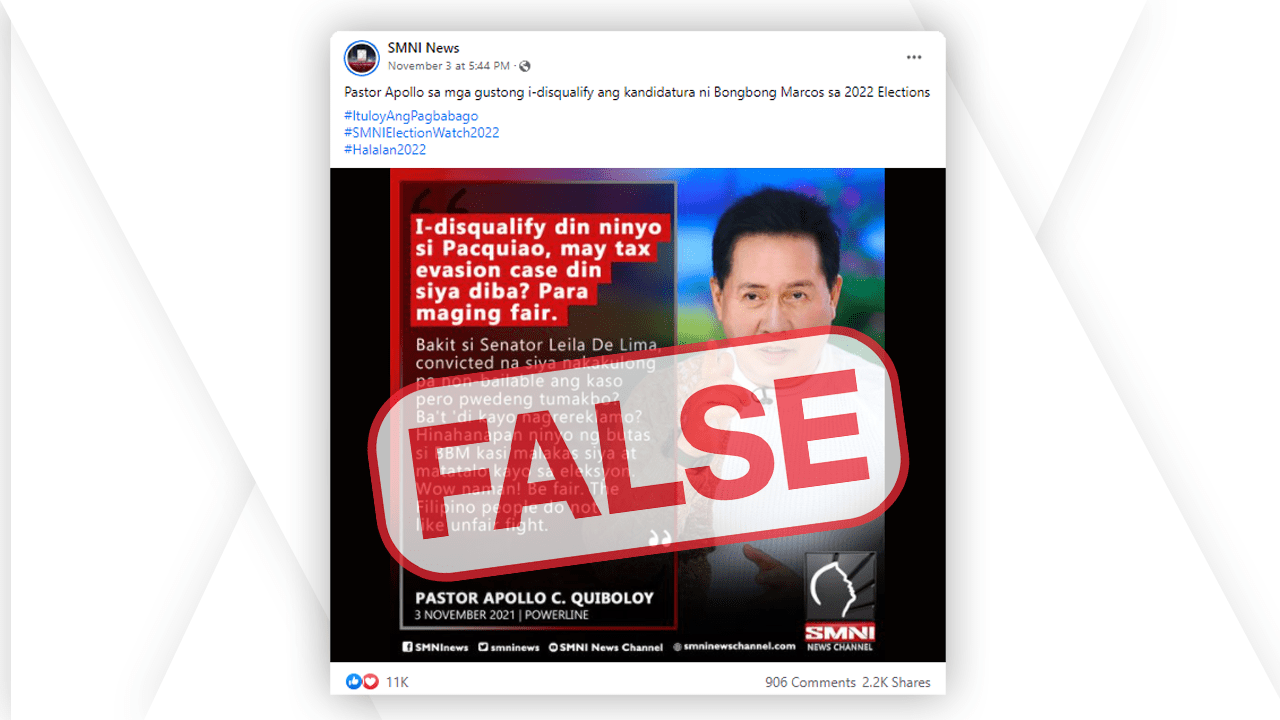 CLAIM: Sens. Manny Pacquiao and Leila de Lima may be disqualified to run for public office

Batas Pambansa 881 series of 1985 or the Omnibus Election Code is the law that governs “all elections of public officers and, to the extent appropriate, all referenda and plebiscites” in the Philippines. It specifies two ways a candidate for public office may be disqualified to run for election.

Section 12 states that a person may be disqualified from becoming a candidate and holding any office if he or she:

Candidates who have been given final judgment on any of the cases above cannot run for public office unless they are granted a plenary pardon or amnesty.

This was the case with former Sen. Antonio Trillanes IV when he and other “Oakwood mutineers” were granted amnesty by President Benigno Aquino III through Proclamation Number 75 on Nov. 24, 2010.

On the other hand, Section 68 of the Code states that any candidate or elected public official may be disqualified as a result of an action or protest in which he or she is involved and  found guilty in a final decision of a competent court, or found guilty by the Commission on Elections of having committed the following:

On July 27, 1995, Marcos was found guilty of failing to file income tax returns and pay income taxes from 1982 to 1985 by the Quezon City Regional Trial Court (RTC) Branch 105. He was meted a total of seven years in prison and fined for several counts of violation of the National Internal Revenue Code (NIRC).

The only son of the late dictator and plunderer Ferdinand Marcos brought his case to the Court of Appeals, which upheld his conviction in 1997 but removed the RTC’s prison term. It  ordered him to pay a fine instead.

In a quote card posted in the official social media accounts (here and here) of Quiboloy’s Sonshine Media Network, the self-proclaimed “Appointed Son of God” said:

He made the statement during the Nov. 3 episode of his show, Powerline.

Does Pacquiao have a pending tax evasion case? Was de Lima convicted of drug trafficking charges?

Based on the provisions of the Omnibus Election Code, can Pacquiao and de Lima be barred from running for public office as claimed by Quiboloy?

Pacquiao is running for president under the Promdi (Probinsya Muna Development Initiatives) party while de Lima, who is detained due to drug trafficking charges that she maintains were trumped-up, is running for a second term as a senator under the Liberal Party.  She has been incarcerated at the Custodial Center of the Philippine National Police in Camp Crame since Feb. 24, 2017.

At present, no petitions for disqualification have been filed against the two lawmakers.

In 2013, Bureau of Internal Revenue (BIR) Commissioner Kim Henares issued a freeze order on the Pacquiaos’ bank accounts and other assets, charging the senator with a total of P2.26 billion in back taxes for 2008 and 2009, including taxes from his earnings in boxing matches abroad.

In its final assessment, the BIR claimed that Pacquiao and his wife Jinkee had a total tax liability of P3.29 billion, including penalties and surcharges.

However, in a decision dated July 27, 2018, the Court of Tax Appeals’ (CTA) First Division ruled in favor of the Pacquiaos and ordered the BIR to cease and desist from collecting their supposed income and value-added tax deficiencies.

The decision penned by Presiding Justice Roman Del Rosario, with the concurrence of Associate Justices Erlinda Uy and Cielito Mindaro-Grulla, said the BIR committed “several violations and irregularities” when it issued its Final Decision on Disputed Assessment (FDDA) against the Pacquiaos.

“[The BIR] is hereby ordered to cease and desist from implementing the subject FDDA and from collecting the subject deficiency tax assessments issued against petitioners for taxable years 2008 and 2009 for lack of merit,” the resolution read.

Pacquiao has no prior civil or criminal conviction.

She has never been convicted in any criminal and civil case. – Rommel F. Lopez