Duterte-ally Pastor Apollo Quiboloy claims nothing comes out of the Senate Blue Ribbon Committee hearings. However, past Blue Ribbon hearings led to the charging and conviction of individuals involved in graft and corruption. 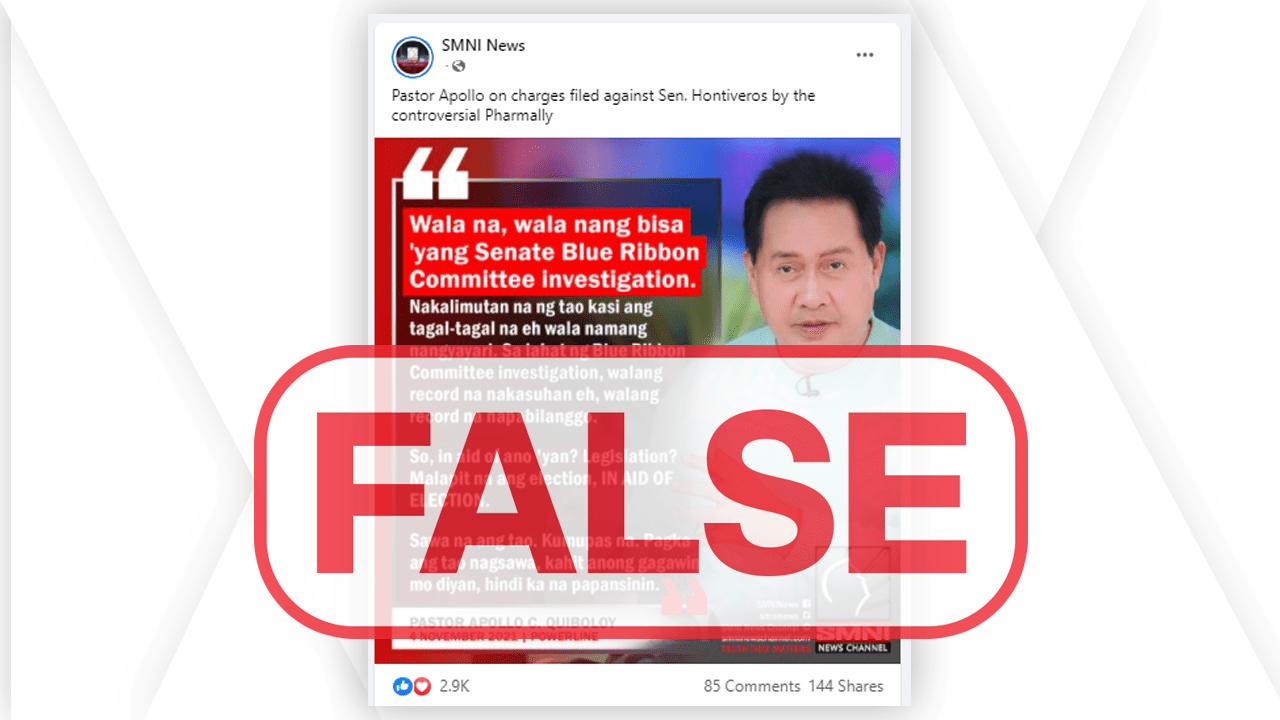 CLAIM: BLUE RIBBON COMMITTEE HEARINGS DID NOT LEAD TO ANY CASES FILED AGAINST AND CONVICTION OF INVOLVED INDIVIDUALS

The Blue Ribbon Committee is formally known as the Committee on Accountability of Public Officers and Investigations of the Senate of the Philippines. Senate Rule X, Section 13 (36) states that the committee has jurisdiction in “all matters relating to, including investigation of, malfeasance, misfeasance and nonfeasance in office by officers and employees of the government, its branches, agencies, subdivisions and instrumentalities; implementation of the provision of the Constitution on nepotism; and investigation of any matter of public interest on its own initiative or brought to its attention by any member of the Senate.”

In the Nov. 4 episode of his program, “Powerline,” Kingdom of Jesus Christ Pastor Apollo C. Quiboloy claimed that the Senate Blue Ribbon Committee investigations did not lead to the charging and conviction of personalities it had investigated.

Quiboloy was reacting to the Senate investigation into the alleged misuse of government pandemic response funds involving a businessman close to President Rodrigo Duterte.  Quiboloy and Duterte have been friends since the president’s days as mayor of Davao City.  Duterte even mentioned once that he received a house as a gift from Quiboloy.

Is it true that nothing comes out of Blue Ribbon Committee hearings?

Blue Ribbon Committee reports have been used in the past either as basis for challenging the constitutionality of some policies or as evidence in the filing of graft and corruption cases against government officials.

For example, because of the findings in the Blue Ribbon Committee hearings into the PDAF, its constitutionality was challenged in the Supreme Court.  The SC ruled unanimously in November 2013 that the PDAF is unconstitutional.

The Department of Justice in September 2013 filed cases of plunder and malversation of public funds against businesswoman Janet Lim-Napoles, Senators Ramon Revilla Jr., Juan Ponce Enrile, Jinggoy Estrada, and 30 others for their alleged involvement in the PDAF scam.

In June 2014, the Ombudsman filed separate plunder charges against Napoles and the three senators. Revilla, Enrile, and Estrada surrendered to authorities after arrest warrants were issued against them.

Due to lack of evidence, Revilla was found not guilty of receiving ₱224.5 million in kickbacks from his pork barrel.  However, Napoles and Revilla’s staff, Richard Cambe, were found guilty and sentenced to reclusion perpetua or a maximum of 40 years in prison.

Revilla is out on bail for his graft cases and has won back his Senate seat.

Enrile and Estrada also are out on bail and still awaiting the verdict on their cases. Both attempted to make a Senate comeback in the 2019 midterm elections but lost.  Estrada is again running for the Senate in the 2022 elections.

In February 2021, Napoles and former Cagayan de Oro Rep. Constantino Jaraula were convicted of graft and malversation of public funds by the Sandiganbayan.