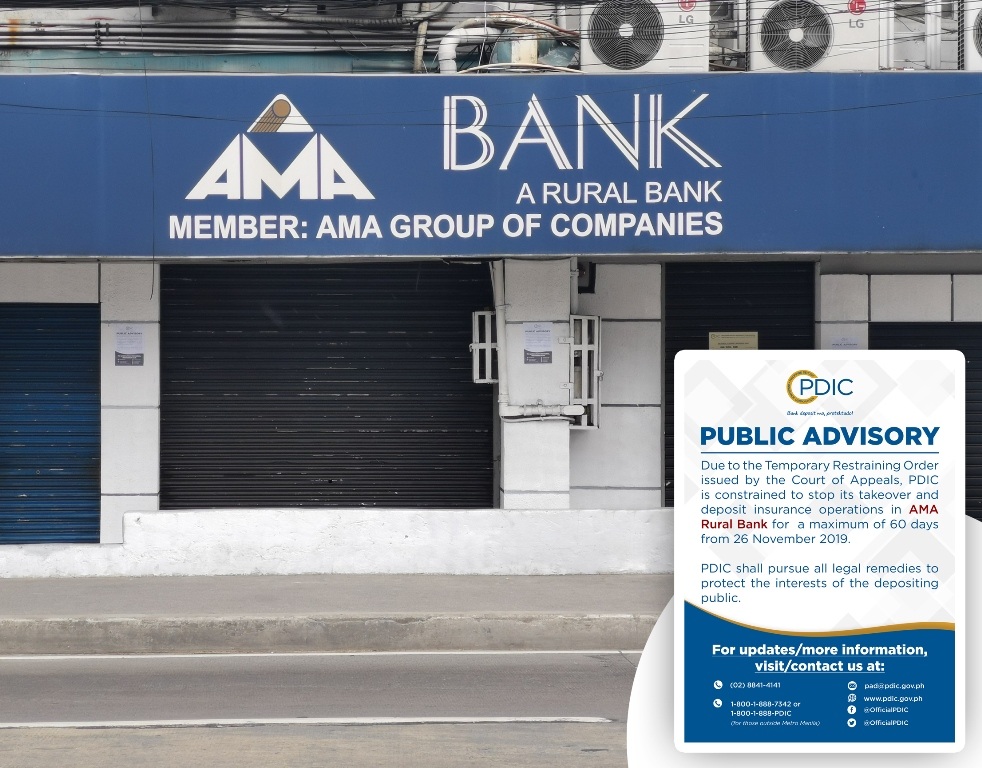 ​Shuttered AMA Rural Bank of Mandaluyong (AMA Bank) secured a writ of preliminary injunction from the Court of Appeals (CA) that orders the Philippine Deposit Insurance Corporation (PDIC) from further pursuing its deposit insurance and liquidation operations of the closed bank.

This means more than 8,000 depositors of the closed AMA Bank will have to wait a while longer before they can be paid the deposit insurance due them.

The injunction will be in effect pending the CA’s issuance of a decision on the case.

In a statement, the PDIC expressed its “grave concern” as the latest CA order “further delayed the processing and payment of deposit insurance claims for valid deposits” of depositors of the closed bank.

“This injunction, including the refusal of AMA Bank officers and employees to account for and turn over the assets and records of the bank and the previous issuance by the Court of Appeals of a temporary restraining order (TRO) against PDIC to implement the closure of AMA Bank, all contributed to the delay in the payment of insured deposits,” the PDIC said.

The PDIC insist that under the law, it remains the sole authority to manage and administer closed banks.  Even with the injunction order, PDIC said AMA Bank remains closed and under liquidation.

The state deposit insurer enjoins depositors, borrowers, creditors and all other clients of AMA Bank to contact them thru their Public Assistance Department via the Public Assistance Hotline at (02) 8841-4141 or the Toll Free Hotline at 1-800-1-888-PDIC (7342) for those outside Metro Manila. Inquiries may also be sent by e-mail to pad@pdic.gov.ph or via private message to the official PDIC Facebook account at www.facebook.com/OfficialPDIC.

AMA Bank, the banking arm of the AMA Group of Companies of businessman Amable Aguiluz, was ordered closed by the Monetary Board of the Bangko Sentral ng Pilipinas on thru Resolution 1705D on Nov. 7, 2019 and placed under PDIC receivership.  The state deposit insurer immediately took over the bank on Nov. 8.

The shuttered bank was able to secure a 60-day temporary restraining order (TRO) from the Court of Appeals that prevented PDIC from liquidating the bank’s assets and paying the valid deposit insurance claims of its depositors.  The order took effect on Nov. 26.

Owners of the bank argue that the BSP’s closure order was “unreasonable” claiming that the bank was “liquid” citing its shareholders’ capital injection of an additional P405 million and a total deposit due from BSP/other banks amounting to P246 million.  (Rommel F. Lopez)