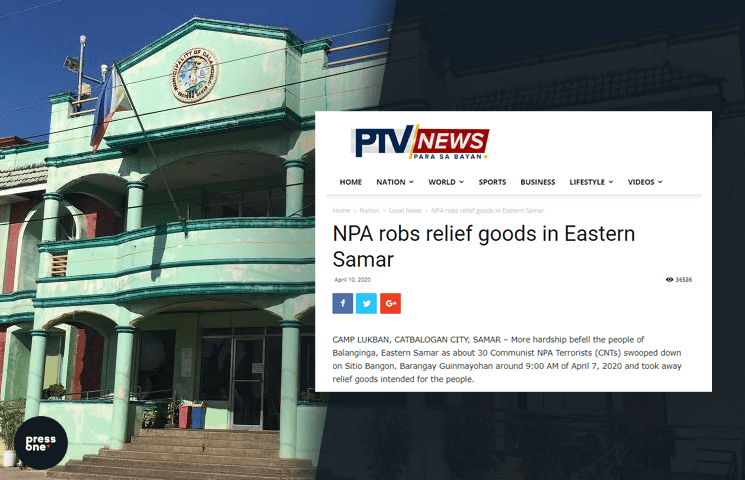 Balangiga city officials have denied a story carried by government run PTV News that armed communist rebels “swooped down on Sitio Bangon, Barangay Guinmayohan around 9:00 AM of April 7, 2020 and took away relief good intended for the people.”

Officials of Balangiga town in Eastern Samar have rebuffed a story carried by PTV News that “Communist NPA terrorists swooped down on Sitio Bangon, Barangay Guinmaayohan around 9:00 AM of April 7, 2020 and took away relief goods intended for the people.”

“We have not received such reports from the locals,” said Balangiga mayor Randy Graza adding that if the news story was true, local residents or barangay officials should have informed him about it.

The Municipal Disaster Risk Reduction Management (MDRRMC) officer, Judith Alde, also denied the report of the alleged seizure of the goods by members of the New People’s Army.

Alde, on April 10, posted a photo on her Facebook account of them distributing relief goods “peacefully” during the supposed time of the ambush.

She told ESTE News that she arrived at Brgy. Guinmaayohan shortly after 9 a.m. on April 7, 2020 and distributed the goods to family representatives of Sitio Bangon together with other MDRRMC staff and barangay officials.

“You may check every family in the barangay and no one can attest that the incident happened. In fact, all of our intended recipients received the food items,” said Adela Ogale, the barangay captain of Guinmaayohan.

According to the press release of the 8th Infantry Division of the Philippine Army, the incident happened in Sitio Bangon, Barangay Guinmaayohan on April 7, at 9 a.m.

Ogale said that she immediately reported to the local PNP about the “fake” report circulating over Facebook. 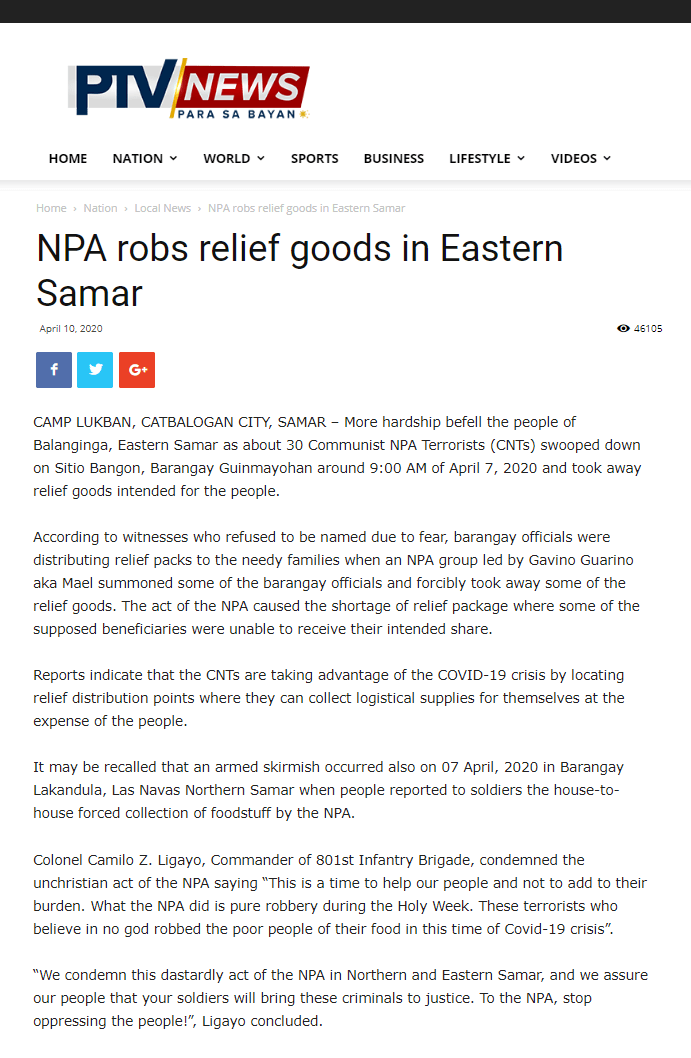 ​PLT. Allan Java Calceta, chief of Balangiga Police Station, said they had conducted a “revalidation” of the incident in Brgy. Guinmaayohan together with personnel of the Provincial Police Office, and found out that there was no such incident on April 7.

Calceta said police were investigating the residents of Sitio Bangon.

Mayor Graza also said they were conducting an intensive investigation into the report.

The Municipal Peace and Order Council will meet on Monday to discuss the incident and release an official statement.