Asia’s 1st green vehicles to be launched during SEA Games 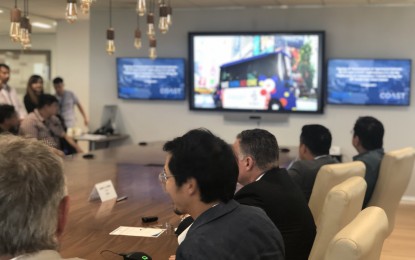 A model “green” shuttle to be used by athletes during the Southeast Asian Games (SEA Games) is flashed on the screen during the press conference after the MOA signing. (PNA photo)

In a memorandum of agreement (MOA) signed between the Bases Conversion and Development Authority (BCDA) and Connected Autonomous Shared Transportation (COAST), three fully electric vehicles with zero carbon footprint will be deployed during the regional sports event.

The MOA was signed by BCDA president and CEO Vince Dizon and Coast Autonomous Chair and CEO David Hickey at the One West Aeropark Building, Clark Global City.

According to Dizon, the pilot testing involved three low-speed “self-driving” vehicles, the first in Asia, which Coast will provide at no expense to the government.

“BCDA and COAST share the same vision for the future: cities must be liveable by removing traffic and connecting people with clean mobility options that put pedestrians first.” Hickey said.

The technology uses high-definition and 3D mapping machines to program each vehicle’s itinerary for it to run without a driver to be able to move the athletes to and from the Athlete’s Village, the Athletic Stadium and the Aquatics Center.

Pierre Lefevre, COAST’s chief technology officer said “the vehicles are not dependent on GPS (global positioning system) and thus, can operate in urban canyons created by tall buildings, under tree canopies and even underground or in tunnels.”

He added that “COAST’s technology is highly flexible and makes cities and campuses more walkable.”

For this year’s SEA Games which will witness almost 10,000 athletes competing, New Clark City will serve as the main hub wherein a world-class sports complex is being completed. (Jojo Mangahis)