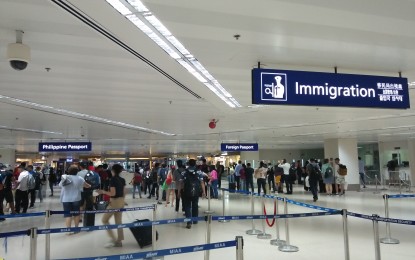 16 undocumented overseas Filipino workers who attempted to leave the country by disguising themselves as tourists have been intercepted by Bureau of Immigration (BI) officers at the Ninoy Aquino International Airport (NAIA) as they were about to board their flights.

BI port operations division chief Grifton Medina said the passengers who were in two batches were intercepted as they were about to board their Cebu Pacific flights to Taiwan and Hongkong at the NAIA 3 terminal last Aug. 7.

“They all confessed during questioning that they are not tourists and that they were hired to work abroad by illegal recruiters,” Medina said.

12 Taipei-bound and mostly women passengers admitted that their final destination is the United Arab Emirates where they were recruited to work by a travel agency based in Manila.

The four Hongkong-bound women confessed that they were going to Hongkong to process their visas to China where they were allegedly promised jobs by a Filipino-Chinese businessman.

All 16 passengers were turned over to the Inter-Agency Council Against Trafficking (IACAT) for investigation.

BI officials remind the public to be vigilant against the sweet-tallk of illegal recruiters who use fake group tours to victimize potential Filipino contract workers. “Do not fall for the sweet-talk of these illegal recruiters. They only want to profit at your expense,” warned Immigration Commissioner Jaime Morente. (Rommel F. Lopez)