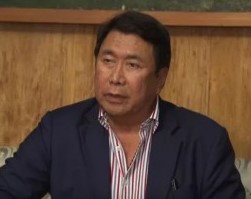 The newspaper columnist was arrested around 10:30 a.m. and was brought to the office of the Special Mayor’s Reaction Team (SMART) at the Manila City Hall.

Tulfo was arrested based on the warrant issued by Manila Regional Trial Court Branch 24 Presiding Judge Maria Victoria A. Soriano-Villadolid for his alleged violation of Republic Act No. 10175 or the Cybercrime Prevention Act of 2012.