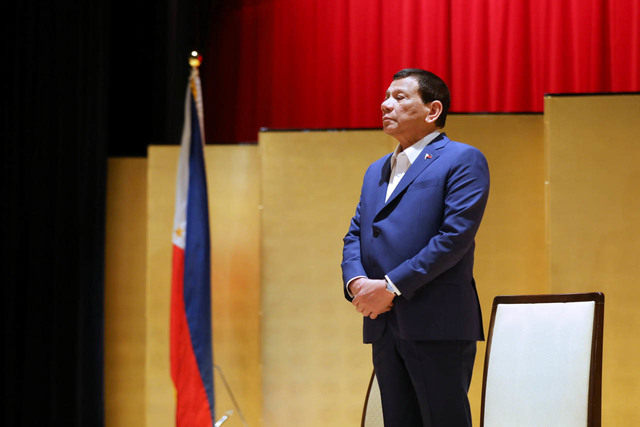 On March 14 when US President Donald Trump holds talks with leaders from Southeast Asia in a special US-Association of Southeast Asian Nations (Asean) leaders’ summit in Las Vegas, Nevada, one leader will likely skip the historic event.

Rodrigo Duterte has repeatedly announced he would not visit the United States until the end of his term in June 2022, because he has shifted the country’s foreign policy. He has leaned much closer to Washington’s ideological rivals – Moscow and Beijing.

In fact, he has been to China five times, more than any other country he had visited since rising to power in 2016. He was in Russia twice and met his political idol – Vladimir Putin – several times. First was in Lima, Peru during an Asia-Pacific Economic Cooperation (APEC) forum in November 2016. The last was in the Black Sea coastal resort city of Sochi in October 2019.

Trump invited Southeast Asian leaders to a meeting in the US mainland after he skipped the Asean Leaders’ Summit in Bangkok in November 2019. Southeast Asian diplomats did not like the snub as it indicated the US administration’s little regard for the region despite unveiling an Indo-Pacific Strategy to counter China’s creeping influence in the Asia and Pacific region.

Last week, in the first Asean foreign ministers’ meeting this year in Nha Trang, Vietnam, diplomats agreed to a meeting with the US leader on March 14 in Las Vegas to hear directly from Trump the American agenda in the region, one of fastest growing economic blocs in the world.

In the next two years, there will be two important political and economic developments in Southeast Asia that could dramatically impact US relations with the region – the creation of new trading bloc, the China-led Regional Comprehensive Economic Partnership (RCEP) and the formal Code of Conduct in the South China Sea.

Washington, which has played a dominant role in this part of the world since the end of World War 2, does not want to be left out in any political, security and economic infrastructure in the region.

However, countries in the region have long complained about the US neglect in the region, as it focused too much on other parts of the world, like Western Europe, Ukraine, the Middle East and Africa.

In 2012, US President Barack Obama stressed the importance of the region when he announced a policy to pivot to Asia. Trump came up with his own Indo-Pacific Strategy, with the US Congress passing a five-year, $5-billion financing under the Asia Reassurance Initiative Act (ARIA).

However, under the $4.7-trillion US federal budget, the US State Department was only authorized to provide less than $1 for economic, social and security assistance to East Asia, much lower than the Middle East where Israel and Egypt alone get more than $1 billion each. Iraq alone gets about a quarter of what was provided for all the countries in the East Asia and Pacific region.

Even if Duterte skips the US-Asean summit in Las Vegas, Manila will still get the lion’s share of about $160 million in economic, social and security assistance. About a third of the funds allocated to the Philippines will go the military, including about $45.9 million in foreign military sales, almost $2 million in military education and training and $5.5 million for counter-terrorism assistance. There are also other security-related aid mechanisms, such as maritime security initiative, disaster preparedness, non-proliferation operations and narcotics control and law enforcement operations.

Washington is also generous in offering Manila some second-hand military equipment to improve its defense capabilities and enhance its maritime domain awareness, or knowing more about what is happening in its vast borders in the South China Sea.

For instance, it may transfer to the Philippines several F-16 fighters, the first multi-role supersonic jets, to effectively help the country in interdicting aircraft intruding into its airspace.

The US Air Force has been conducting training flights for some local pilots in Basa Air Base to familiarize them with the fighters. The Philippines does not have multi-role fighters and has been operating trainer jets, like the Anglo-Italian Agusta S-211 and the South Korean-made FA-50 trainers, which are aircraft to help transition air force pilots to much faster and more sophisticated fighters like US General Dynamics F16 Fighting Falcon multirole all-weather jets or the Swedish Saab JAS 39 Gripen multirole single-engine aircraft, which had long been offered to the Philippines.

There are also plans for the US to donate Bell AH-1 Cobra and S-70 Black Hawk helicopters apart from selling to Manila under commercial terms Boeing AH-64 Apache helicopters.

The military is apparently immune from sanctions to be imposed by Washington after some US senators passed a resolution slapping a travel ban and asset freeze on Filipino officials involved in the “wrongful detention” of a sitting opposition lawmaker, Leila de Lima, since 2017.

US lawmakers are focusing on the Philippine National Police (PNP) because of its involvement in the administration’s brutal and violent “war on drugs,” which saw close to 6,000 people, mostly slum dwellers, killed in an anti-drugs campaign when they chose to shoot it out with arresting law enforcers.

Early in Duterte’s administration, the US senators blocked the sale of 26,000 assault rifles due to human rights violations, which angered the president and forced him to accept token donations of Kalashnikov rifles from China and Russia in 2017 during the Marawi conflict.

Duterte has also attacked the United States repeatedly, but avoided criticizing Trump whom he considered as a friend, complaining about the second-hand ships, planes, rifles and other military equipment under the decades-old military assistance agreement.

As a result, the US military has donated some brand-new military equipment, Scan Eagle unmanned aerial vehicles and other maritime surveillance equipment.

The US needs the Philippines more in its long-term security strategy because of its locations. Thus, it cannot allow Manila to fall outside its radar screen and become a satellite of rival China, like other Indo-Chinese states, including Cambodia and Laos.

As early as in the 2000s, the RAND Corp. had made studies on the importance of relocating its bases in Southeast Asia because of emerging threats from China in the Taiwan Straits and the South China Sea.

Its air bases in Japan, South Korea and Guam would have much longer time to react in any contingency in the region. Thus, the 2014 Enhanced Defense Cooperation Agreement (EDCA) with the Philippines allowed the US Air Force to rotate its aircraft and land in any of the local air bases in Pampanga, Palawan, Cebu and Cagayan de Oro for training and exercises.

In extreme cases, the US Air Force can also use civilian airfields in Basco, Batanes, Laoag, Ilocos Norte and a base in northern Cagayan province for refueling and emergency repairs.

Duterte can afford to skip the US-Asean summit meeting in Las Vegas, showing his defiance to American hegemony and sticking to his independent foreign policy, which was really to slide to China and Russia.

No, he is not afraid the United States might ban him from traveling. Duterte would likely raise his own profile to his supporters by showing the Philippines was no lackey to the Americans. However, the SWS surveys have consistently shown that most Filipinos have a much high regard for Washington than Beijing.

He knows that even if he snubs the Las Vegas summit, it will not drastically affect security relations. The Philippines can enjoy support from Washington and its rivals. And he can proudly show he is a tough leader from a small country.

A veteran defense reporter and former correspondent of the Reuters news agency, Manny Mogato won the Pulitzer in 2018 for Reuters’ reporting on the Philippines’s war on drugs.