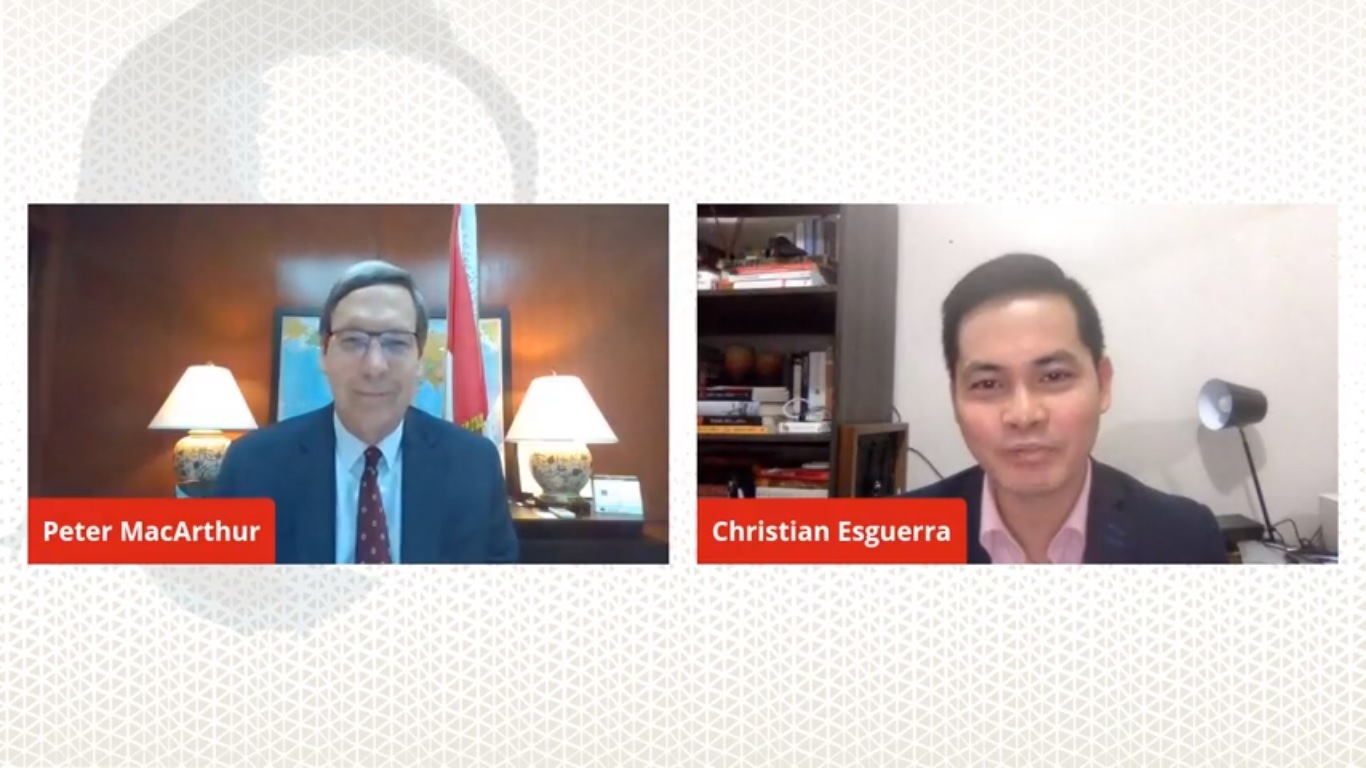 Canadian Ambassador to the Philippines Peter MacArthur after announcing that veteran journalist Christian Esguerra is the 2020 Marshall McLuhan Fellow (screengrab from the 2020 Jaime V. Ongpin Journalism Seminar of the Center for Media Freedom and Responsibility)

The Canadian Embassy in the Philippines and the Center for Media Freedom and Responsibility (CMFR) named veteran journalist and ABS-CBN News Channel (ANC) anchor Christian Esguerra on Friday as the 2020 Marshall McLuhan Fellow.

The announcement was made at the conclusion of the CMFR’s Jaime V. Ongpin (JVO) Journalism Seminar, where Esguerra also served as a panelist along with other journalists.

MacArthur cited Esguerra’s “consistency in providing the public outstanding coverage of the most pressing stories of the day; knowledge of a wide range of issues, deftness in adapting to the changing platforms of the industry, and a desire to mold the next generation of media professionals“ and his “passion for the craft (that) transcends news platforms, and whose proficient mastery to discover and explain the facts restricts the space for disinformation to thrive.”

Established in 1997 by the Embassy of Canada in the Philippines and the McLuhan Program at the University of Toronto, the prestigious Marshall McLuhan Fellowship is yearly awarded to a journalist “embodying outstanding qualities in the field of investigative journalism.”

Named after world-renowned Canadian communication theorist and scholar Marshall McLuhan, the recipient of  the fellowship is sent to Canada for a two-week interaction and speaking tour with Canadian government officials, members of civil society, media counterparts, academics and students. Upon the Fellow’s return to the country, he/she visits five key cities in the Philippines on speaking tours with communication students as well as local media practitioners organized by the embassy.

The panel discussed various issues ranging from the coronavirus pandemic’s to their work as journalists, press freedom in the Philippines, specifically the franchise denial of ABS-CBN and the weaponization of the law against media organizations in the country.

Also recognized during the JVO is Philstar.com’s Diola who received the CMFR’s 2020 Award of Distinction for “going beyond the surface of news online” and for her “innovative spirit on cyberspace.”

The CMFR Award of Distinction is given to journalists who “provide a model for journalism, enhancing the relevance of news and revitalizing the values of truth and freedom in its practice.”

The CMFR annually holds the JVO to gather journalists who are recognized for their outstanding work in the preceding year to discuss pressing issues in journalism and the country.

This is the first time the JVO was held virtually due to restrictions brought about by the continuing coronavirus pandemic. Rommel F. Lopez