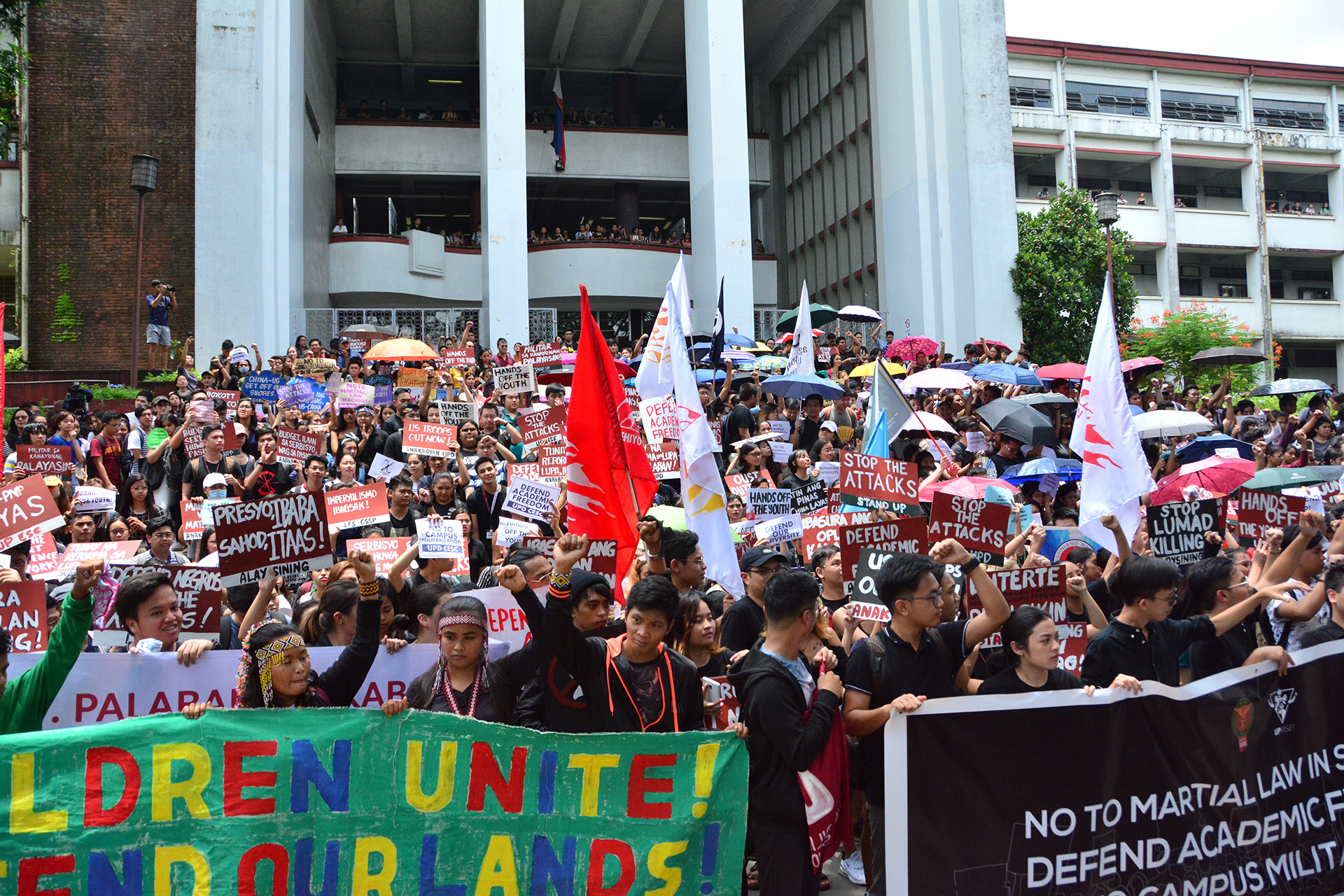 Students and faculty members of the University of the Philippines in Diliman (UPD) and Los Baños (UPLB) walked-out of their classes Tuesday afternoon to protest the seeming “intrusion” of the military and police in state colleges and universities.

Tagged as the “UP Day of Walkout and Action”, placard-bearing UPLB students initiated the walkout at 4 p.m. in front of the Humanities building making their way in front of other buildings to invite other students to participate.

“We are opposing the recent attacks of the government on the youth,” lamented Jade Ashley Corpuz, spokesperson for Anakbayan-Southern Tagalog.

She decried the aggression against progressive students since “Senator Ronald ‘Bato’ Dela Rosa is pushing for the military and police to enter universities.”

Last August 8, the All UP Academic Employees Union-UPLB alleged that police forces who allied themselves with the Bay Municipal Police Station tried to enter the UP Rural High School “without any clear objective” on their visit.

Meanwhile in UP Diliman, Isaac Punzalan, the UP Student Regent, bared that the protest was meant to assert the campus stand as a “zone of peace against the presence of state agents.”

League of College Councils (LCC) convenor Kenneth Eser Jose stressed that the presence of the police and military in schools “is effectively Martial Law in schools that can lead to harassment, surveillance and intimidation in our community.”

He also challenged Dela Rosa and the Philippine National Police in a debate.  “They need not to bring guns, only their principles, and we will settle the score,” he said.

The walk out is supported by university officials led by UP Diliman Chancellor Michael Tan, UP Cebu’s Liza Corro and other college deans and department heads.

“As educators and education workers … We will continue to teach our students the value and importance of human rights in a democratic society,” they declared in their joint statement.

Reacting to the protests, Interior and Local Government (DILG) spokesman Jonathan Malaya, said the “government is not the evil monster that you portray us to be.”

He said the DILG is “alarmed by the intensification of communist recruitment in schools given that the communist rebel groups are targeting minors who are in Senior High School.” (Jojo Mangahis)