“It is sad that a doctor has offered his life. He is well-deserved!” So was Chao-Tiao Yumol hailed by a social media netizen.

The indicted killer of three has been glorified into a hero.

As the acclaim of hosannas poured, the news website Rappler made a scanned study of public posts in Facebook and YouTube and found about 250 YouTube videos and over 2,300 Facebook posts, groups, and verified profiles mentioning “Yumol” from Sunday, July 24 to Tuesday, July 26. Rappler then analyzed the substantive side of the videos and posts whether they assailed the crime or defended the suspect.

“The analysis showed that over half of the posts mentioning Yumol on Facebook support or sympathize with him (56.6%), and almost half of the videos on YouTube mentioning him (45.4%) are supportive.”

What exactly is the true story?

In 2020, Yumol read in a YouTube video a supposed letter from the Philippine National Police dated June 2020 saying the Furigay couple Roderick and Rosita were “high value individuals suspected as drug personalities.” He claimed the letter was a response to his inquiry to the PNP on the Furigays that he had written in July 2019. There was something wrong, however, in his presentation of the letter. He covered the letter’s signatories with his own hands, saying he could not disclose it publicly. He just said that a police general and a chief of intelligence signed the letter. Why?

Yet Yumol himself admitted there was a contradiction. On Sept. 20, 2019, the PNP’s Drug Enforcement Group (DEG) based in Camp Crame issued a certification that cleared the Furigays of involvement in the drug trade. Police Lt. Col. Crisle T. Cainong signed the certification as officer in charge of the DEG. 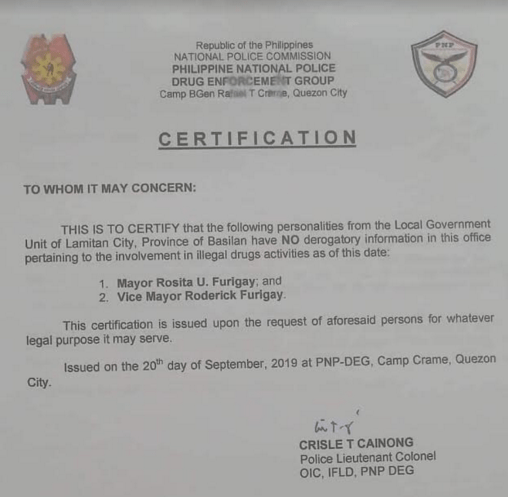 And yet another certification came the way of the Furigays dated Jan. 15, 2021. It certified that Rosita U. Furigay had no pending case involving Republic Act 9165 (Comprehensive Dangerous Drugs Act of 2002). It was signed by Juvenal Blanquera Azurin, regional director of the Philippine Drug Enforcement Agency (PDEA) of the Bangsamoro Autonomous Region for Muslim Mindanao (BARMM). 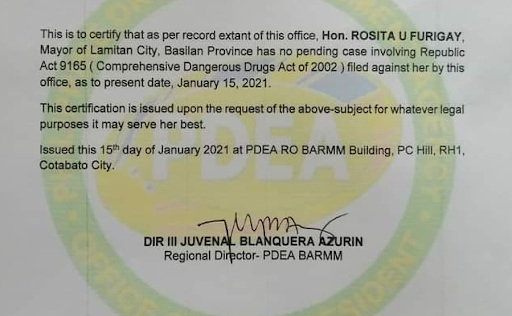 Yumol had more contradictions. Lamitan City, Basilan has had three citations for the Seal of Good Local Governance in 2016, 2017 and 2018. The criteria for a local government unit to qualify for the SGLG citation is strictly what the Department of the Interior and Local Government calls “all-in” – the LGU must pass all of the ten assessment areas, among which are safety, peace and order which includes the state of drugs in the locality.

But before Yumol’s tirades against the Furigays had badgered on their alleged involvement in the drugs trade, he had ranted on only one thing – the closure of his clinic in Lamitan which affected his practice of medicine. He was operating without a license to operate an infirmary and another license needed to operate an animal bite center. Doctors in the city who themselves were subjected to the same regulation had complained to the Ministry of Health of BARMM.

The BARMM’s Cease and Desist Order dated April 5, 2019 was served to Yumol. He was given until May 3, 2019 to comply. Four licensing officers of the Regulations, Licensing Enforcement Cluster of BARMM’s Ministry of Health signed the order. In other words, the Furigays were not yet in the picture. 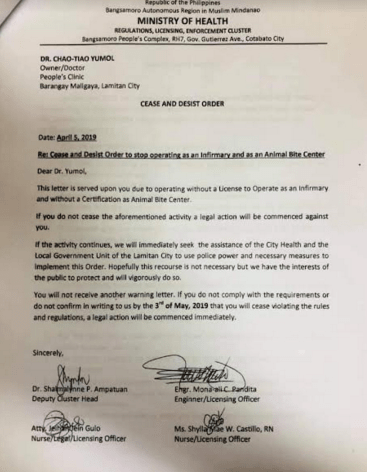 Apparently because he still failed to comply, the BARMM Minister of Health Dr. Saffrullah M. Dipatuan wrote a letter dated sometime July 2019 to mayor Rosita Furigay requesting her to serve the Cease and Desist Order. 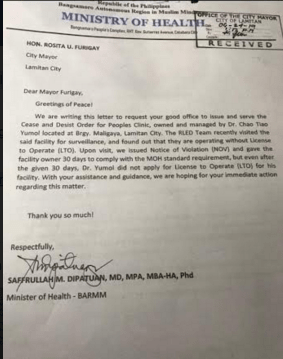 Take note that Dipatuan mentions the process the ministry’s health agents took: first they conducted a surveillance of Yumol’s clinic, then they issued a Notice of Violation after which he was given 30 days to comply. Referencing Dipatuan: Yumol did not apply for a license to operate. And so Dipatuan requested the city mayor: “we are begging for your immediate action regarding this matter.”

The timeline shows us how Yumol had graduated from his anger on the Cease and Desist Order, to venting his anger at the Furigays using the Rodrigo Duterte framework of unverified matrices of so-called drug kingpins yet making exceptions to the Davao Group that had never been investigated. And then Yumol finally succumbs to the Duterte kill, kill, kill rhetoric.

The hero-worshippers of Yumol may be interested to know that his brother Chin Chu Yumol is currently serving sentence at the San Ramon Penal Colony in Zamboanga City for the crime of murder. He had killed one Tausug said to be a rival for a love interest.

Disinformation coming from hyperpartisan trolling is a driver of distorted values. That is an understatement to make. In fact, we have before us a huge red flag. We have a damaged culture.