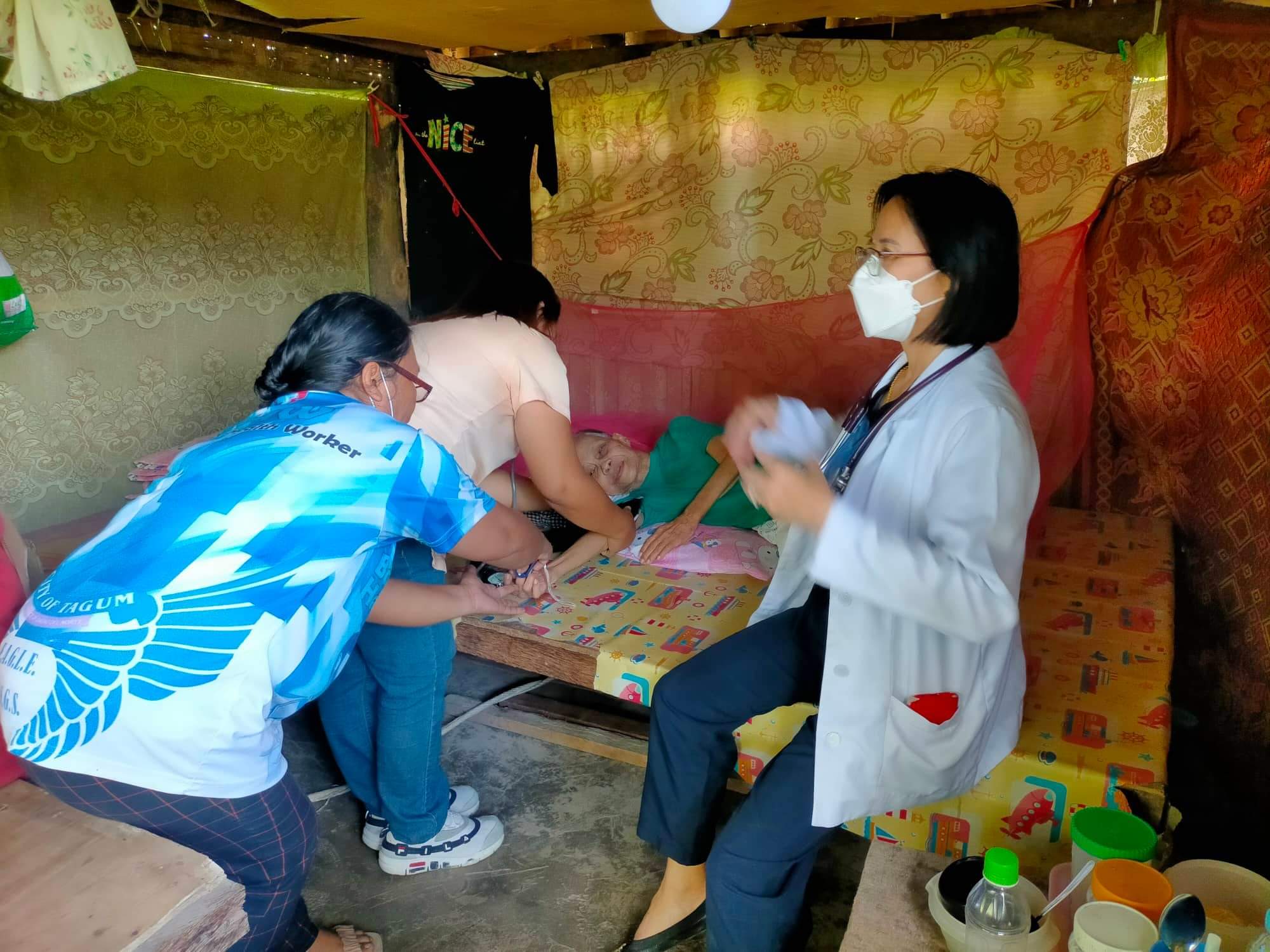 Dr. Susan Gantuangco and other healthcare workers of Tagum City’s Health Office visit 82-year-old Casumba Digadong Bago of Purok 4, Barangay Canocotan. The senior citizen is bedridden due to a stroke and has not seen a doctor for more than 2 years.  She is also hypertensive. (Photo courtesy of Lalaine Olegario, nurse of Brgy. Canocotan Health Center)

TAGUM CITY – Casumba Digadong Bago is an 82-year-old resident of Purok 4, Barangay Canocotan in this city.  She is mostly confined to her bed after suffering a debilitating stroke.  Her left side is paralyzed and she could barely walk.  Her daughter takes care while tending their small backyard copra-drying business.

Apart from their poor economic conditions, the Bago residence is located at a very remote area where public transport is non existent.  They need to cross a creek before they can reach their house.  Heavy rains can isolate the area as floodwater levels can reach more than six feet.  Bago’s house rests on 10-foot stilts to evade the flood waters.

Because of this, Bago is confined to her home without any access to much needed medical attention.

It would take a revived innovative health care program for Bago to get a bedside medical checkup from a government medical doctor after 2 years of being bedridden. 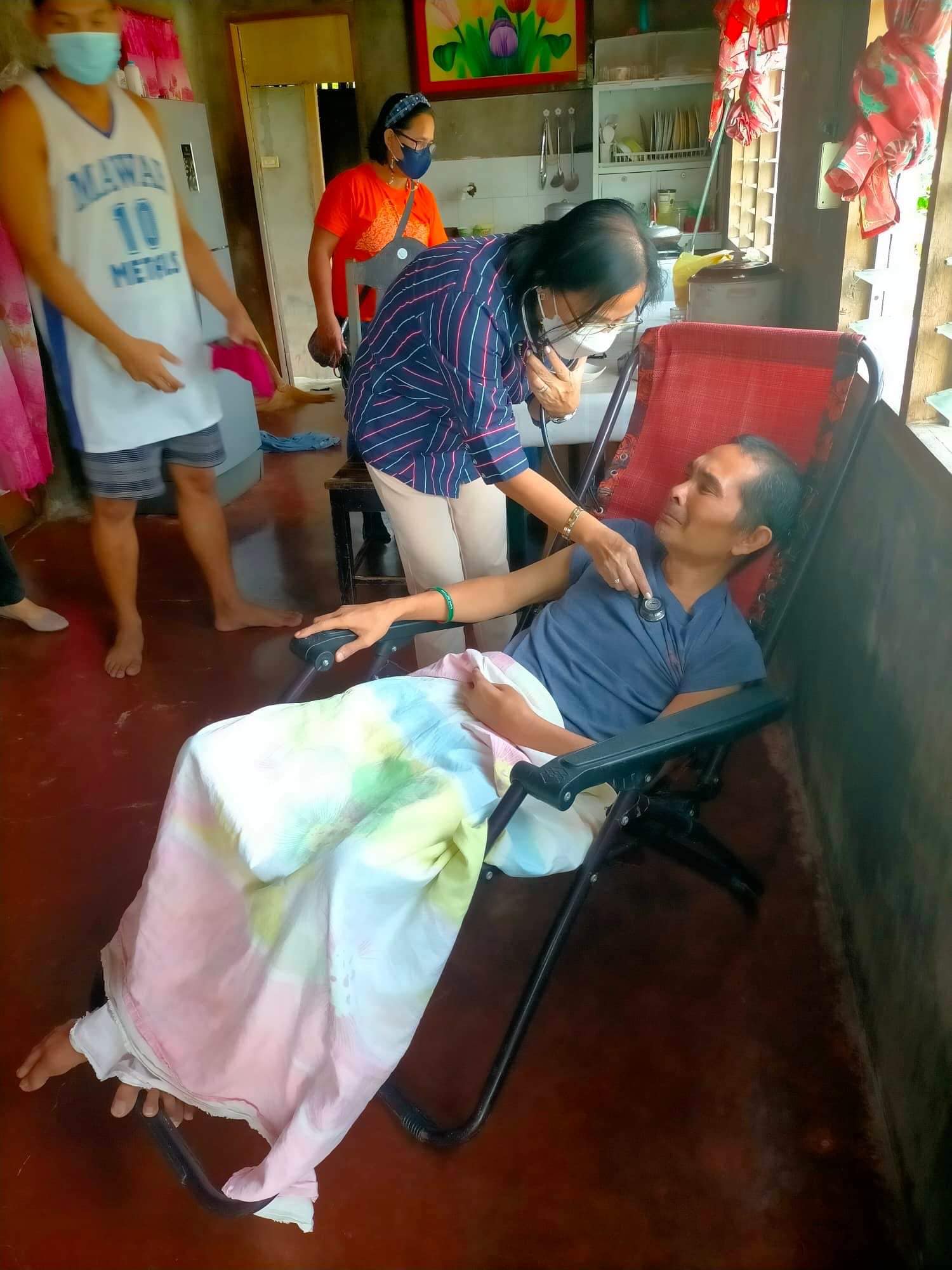 Bago’s situation is not fully isolated. These are some of the conditions of the poor and elderly of this city that caught the attention of city mayor Rey T. Uy when he first introduced the “Doctor is in Your House” program during his first term as local chief executive in 1988.

During his inaugural address, Uy promised that during his first 100 days back in office, he will revive his innovative health care program.

“To make sure that the services of the city government are able to reach those who need it the most, Mayor Uy initiated multiple programs to accommodate the less fortunate. Among those are the “Doctor is in Your House” program, which aims to deliver house-to-house check-ups and free medicine to our bedridden patients,” a press release about Uy’s inauguration says. This forms one of his health services program for Uy’s first 100 days back in office as mayor.

Uy ran to regain his old post back in 2019 but was defeated by then-incumbent Allan Rellon who now sits as vice mayor.

“Doctor is in Your House” consists of doctors and nurses employed by the city government on plantilla position under the City Health Office to deliver basic medical services to senior citizens and bedridden patients right at the patient’s own homes.

Barangay health workers (BHWs) visit the houses of patients upon the recommendation of the purok leader who makes a prior visit to confirm the condition of the patient.  The BHWs make the initial assessment if the patient is physically incapable of making the trip to the barangay or city health centers. 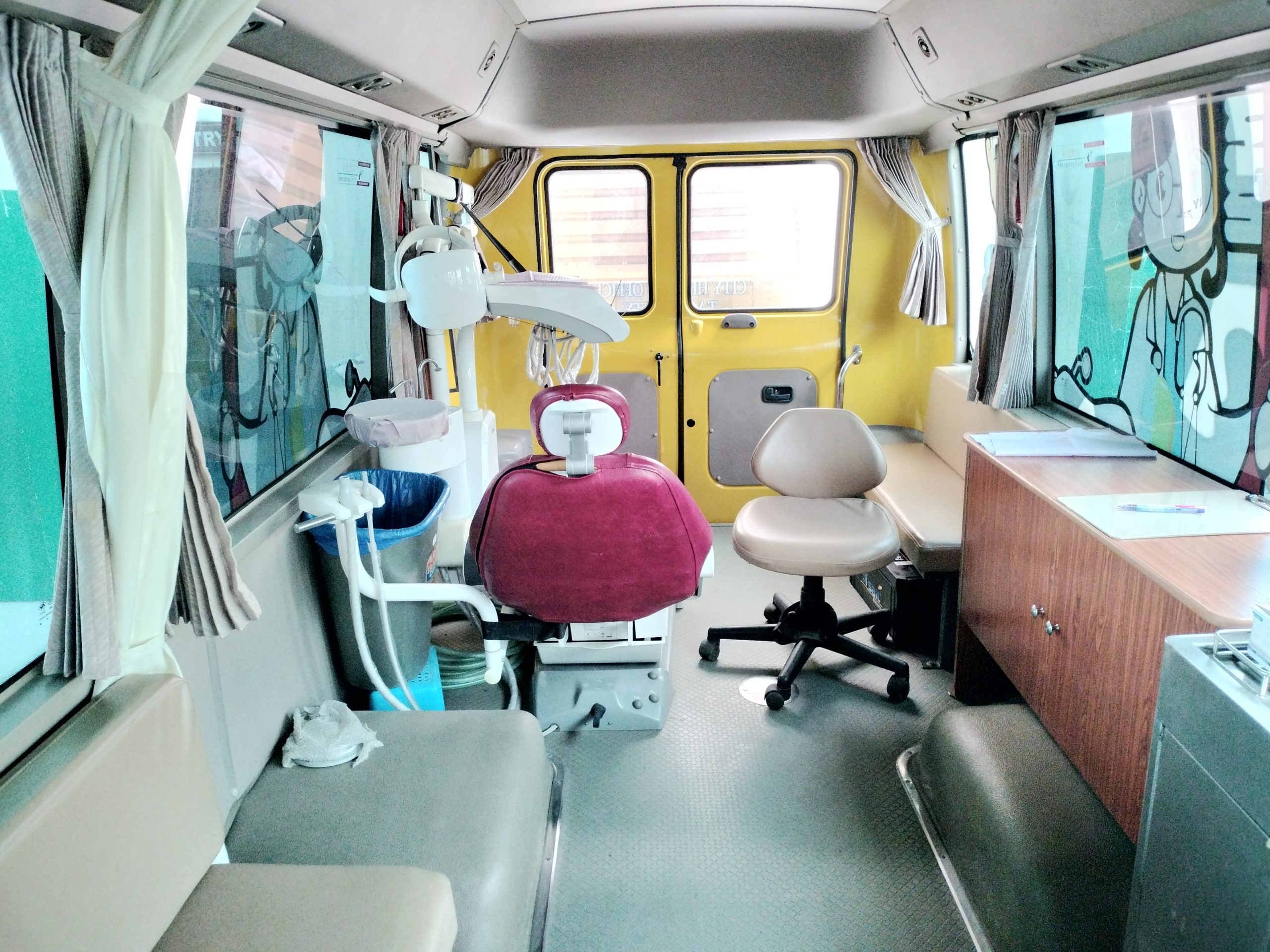 Tagum City also has a bus that was converted into a mobile dental clinic that visits every barangay to provide free dental services to indigents (Photo by Rommel F. Lopez)

According to Lalaine Olegario, resident nurse of Barangay Canocotan Health Center, Bago is one of the 25 patients of the barangay served by their unit since Uy revived the program on July 1.  Almost all their patients are stroke victims.

Olegario said Bago has never seen a doctor ever since she suffered a stroke.  A barangay health worker recommended a visit from their doctor after making the initial assessment on Bago.

Dr. Susan Gantuangco visited and examined Bago on her visit to the elderly patient on July 26.  It was the very first time Bago underwent a medical examination ever since she had her stroke.  Initial assessment on her condition showed she was hypertensive and suffering from malnutrition and macular degeneration. The physician recommended she continue her maintenance medicines and gave her multivitamins. Gantuangco also recommended that the elderly bedridden patient needs to have some physical activity to regain some muscle growth and control.  She sent her request to the Office of the City Mayor, through the recommendation of the City Health Office, that a wheelchair be given for free to Bago.  In just a few short days, city hall personnel delivered the wheelchair to Bago at her home so she can enjoy the morning sunlight and not be lying in bed the whole day.

According to City Health Office (CHO) head Dr. Arnel Florendo, the CHO also sends massage therapists certified by the Technical Education and Skills Development Authority (Tesda) and the Department of Health (DOH) to provide bedside physical therapy and massage for bed-ridden or immobile patients like Bago.

“You see that we have lots of poor patients needing medical care but they are unable since they are either bed-ridden or they do not have the money to make the trip to the nearest health center or hospital,” Florendo said in a mixture of Cebuano and English.

Bago’s health financing predicament is a perennial problem for most Filipinos as health spending remains a big priority for Filipinos. A family member getting hospitalized can take huge toll on the family’s savings, if they have any.

The 2020 Philippine National Health Accounts, an annual publication by the Philippine Statistics Authority (PSA) released in Oct. 2021, revealed that 44 percent of a Filipino household’s income are spent for out-of-pocket expenses for medical care.  This has been identified as the major reason that often pushes Filipino households into poverty.

Even if the economy of the capital of Davao del Norte province is bustling, its growing population presents a challenge to the city government to deliver basic health services to its citizens.  According to the 2020 census, Tagum City is home to 296,202 people, making it the most populous component city in Mindanao.

While the growing metropolis has also been ranked third on the Overall Competitive Component Cities in the Philippines, fourth on Infrastructure, second in Resiliency, 13th on Economic Dynamism and first on Government Efficiency in the 2021 Cities and Municipalities Competitiveness Index (CMCI), the city has its share of problems as well.

Poverty incidence in the first half of 2021 in Davao Region (Region 11) where the city is located is at 14.0 percent. “This means that about 140 out of 1,000 families had income below the amount needed to buy their basic food and non-food needs,” according to the report of the Region 11 office of the PSA. The latest number is lower from the estimated 17.8 percent during the same time in 2018.

Florendo is thankful that Uy decided to revive his innovative health services project which the previous administration abandoned for reasons not yet known.  He said that indigent residents like Bago are given another lease in life by getting the much-needed medical attention she deserves.

Bago and other indigent residents of this city have better access to health care services compared to the rest of the country where some die without seeing a doctor.

Florendo said the “Doctor is in Your House” program addresses the two main problems identified by the PSA studies: access and finance.

The program brings the city’s health services closer to the people especially to senior citizens and bedridden patients who are physically challenged to make the trip to the health center or government hospital or financially incapable of paying for a medical appointment with a private doctor.

“We brought the doctor to them, instead of the patient coming to us. And it’s all for free,” he said.

He added that they also used the program to convince more people to get the Covid-19 vaccine since some of them were either ill-informed about the effects of the vaccine or are unable to make the trip to the vaccination sites due to the same reasons stated above.

“Children with birth defects are also the target of our program,” he added.

Other services that the city has introduced at the inauguration of Uy’s term were the free eye care and dental services for indigent residents.  But Florendo insists that only indigent citizens are provided the services to ensure that public funds go to those who really need the services.

“We stopped the ‘medical mission’ approach where everyone comes and gets a check up even if their condition is only a mild cough or cold. We made sure that our efforts and especially our funds benefit the poor,” Florendo said.

The city health chief said that based on the first month and a half of the implementation of the program, he is sure that the program will continue as it benefits are directly felt and enjoyed by indigent citizens.  Olegario agrees.

“We have residents coming to us requesting a doctor or nurse or BHW to visit their relative who is either a senior citizen or bedridden.  They have heard about the program so they personally report the cases to us which always happens that the patients are indeed sick or bedridden.  They are honest not want to take advantage of the program,” she said in Cebuano.

Olegario hopes that the city government allocates more funds to continue and expand the program to bring the services close to the people instead of the people approaching them in the health centers.

Florendo said that Uy plans to build bigger health centers with better facilities and more medical equipment like xray machines and medical laboratories per barangay. He said that the city also has plans to hire for plantilla positions some of the 30 nurses hired by the regional DOH office to augment the city’s health office manpower during the height of the Covid-19 pandemic.

While the challenge to meet the healthcare demands of the city continues to grow, Florendo said he is hopeful that his office will be able to meet them head on as Mayor Uy has earmarked a bigger sum to the city’s health services budget in the 2023 appropriations compared to this year’s.  This means more facilities, more free medicines and more health care workers visiting poor and sick residents right at their very own homes.

This story is part of the journalism fellowship of the Philippine Press Institute under the auspices of the Hanns Seidel Foundation.