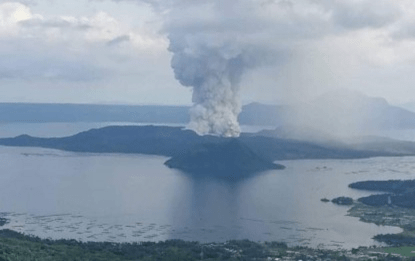 Taal Volcano has been de-escalated from alert level 2 (decreased unrest) to 1 (low-level unrest), according to the Philippine Institute of Volcanology and Seismology (Phivolcs).

The state volcano agency said in its 8AM bulletin that in the past two months, Taal Volcano was seen to have “baseline volcanic earthquake activity, stabilizing ground deformation of the Taal Caldera and Taal Volcano Island edifices and weak degassing and surface activity at the main crater.”

However, the agency advised that sudden steam-driven or phreatic explosions, volcanic earthquakes, minor ashfall and lethal accumulations or expulsions of volcanic gas can still happen even at Alert Level 1. It can also affect areas within the Taal Volcano Island (TVI).

“DOST-Phivolcs is lowering the alert status of Taal Volcano from Alert Level 2 to Alert Level 1 to reflect the overall decrease in the level of monitoring parameters. Alert Level 1 means that the volcano is still in abnormal condition and should not be interpreted that unrest has ceased or that the threat of an

Taal Volcano’s daily average of volcanic earthquakes decreased from seven events per day from January 1 to May 31, 2022 to zero events per day since June 13, 2022.

“The sustained seismic quiescence for the past month indicates that degassing and rock-fracturing processes related to magmatic activity beneath TVI have abated, and that the possibilities of magma intrusion into the Main Crater have significantly decreased,” it said.

Meanwhile, the volcano posted an average of 1,214 tonnes of sulfur dioxide per day between May and July 2022. The latest emission rates fell to 237 tonnes per day.

“Such low concentrations are consistent with weakened degassing from magma beneath TVI and volcanic gas being efficiently absorbed by the Main Crater Lake and by Taal’s recovered hydrothermal system,” Phivolcs said.

With this, Phivolcs raised Alert Level 3 or magmatic unrest over Taal Volcano.

“Since then, background hydrothermal activity in the Main Crater Lake has been quietly transpiring,” the agency said.