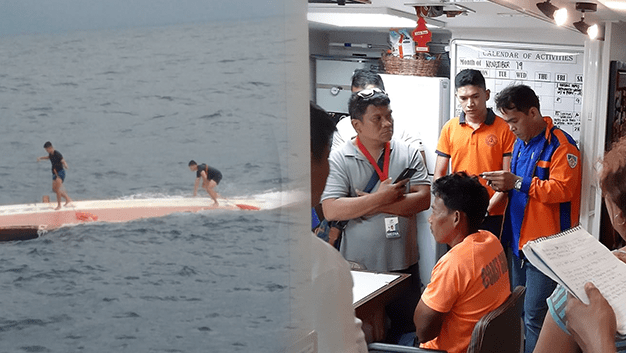 Philippine Coast Guard (PCG) members in action as they conduct their search and rescue operation for the 13 missing fisherfolks (Photo courtesy of coastguard.gov.ph)

The Philippine Coast Guard (PCG) has still not stopped its search and rescue operations for the 13 missing fishermen from Barangay Sisiman in Mariveles, Bataaan

It has been over two weeks since the fishing vessel FFB Three Sisters – 2 disappeared due to strong wind and big waves somewhere in the area of Bajo de Masinloc, Zambales.

The boat carrying 12 crew members and the skipper left Barangay Sisiman in Mariveles, Bataan on October 28 and was on their way home when they encountered bumpy waters on November 6.

“We will also coordinate with the China Coast Guard if they were able to rescue some of them because there was a previous incident where [the] China Coast Guard and a passing vessel rescued the victims,” PCG spokesperson Captain Armand Balilo said.

Commander Airland Lapitan of the PCG-Bataan Provincial Station said a “Notice to Mariners” had been issued nationwide to adopt a more intense active search with three PCG boats dispatched to continue the search in the area.