Richard Gomez asks to correct PressONE.PH fact check of his statement on aid received by Ormoc after ‘Yolanda’ 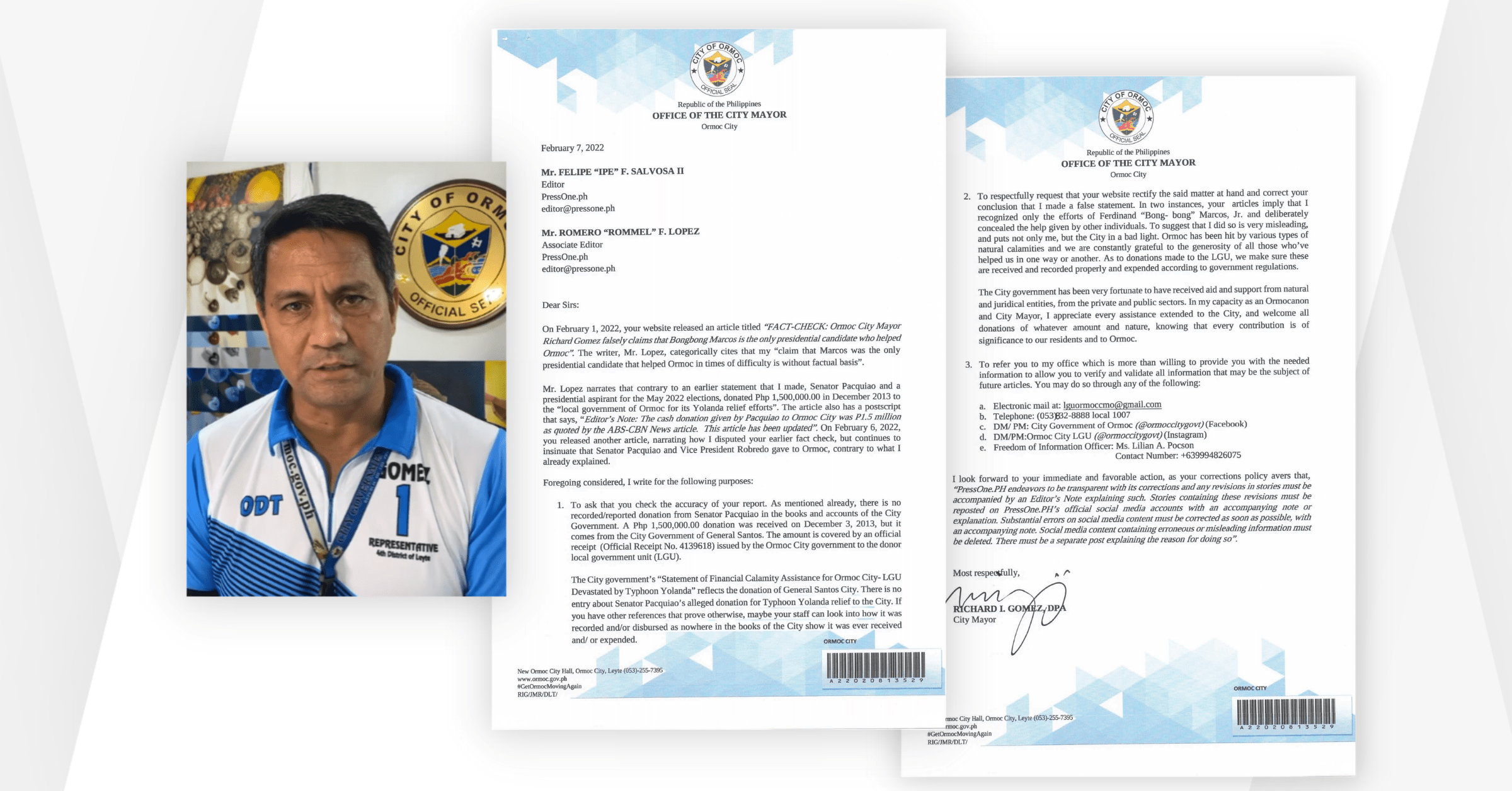 Ormoc City Mayor Richard Gomez has formally requested PressONE.PH to “rectify” the series of articles we published to fact check his recent statements regarding the aid received by Ormoc during the aftermath of Super Typhoon Yolanda in 2013.

In a Facebook post, Gomez claimed that Marcos was the only presidential candidate who helped the city of Ormoc during calamities. 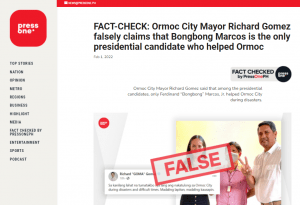 In a live video streamed on his Facebook page on February 3, 2022, Gomez doubled down on his claim and erroneously credited our story to Rappler. PressONE.PH also fact checked his claim in this video that the ‘Nutribun’ Project was an accomplishment of deposed dictator Ferdinand E. Marcos.

On February 8, PressONE.PH received an email from Gomez. This email reads as follows: 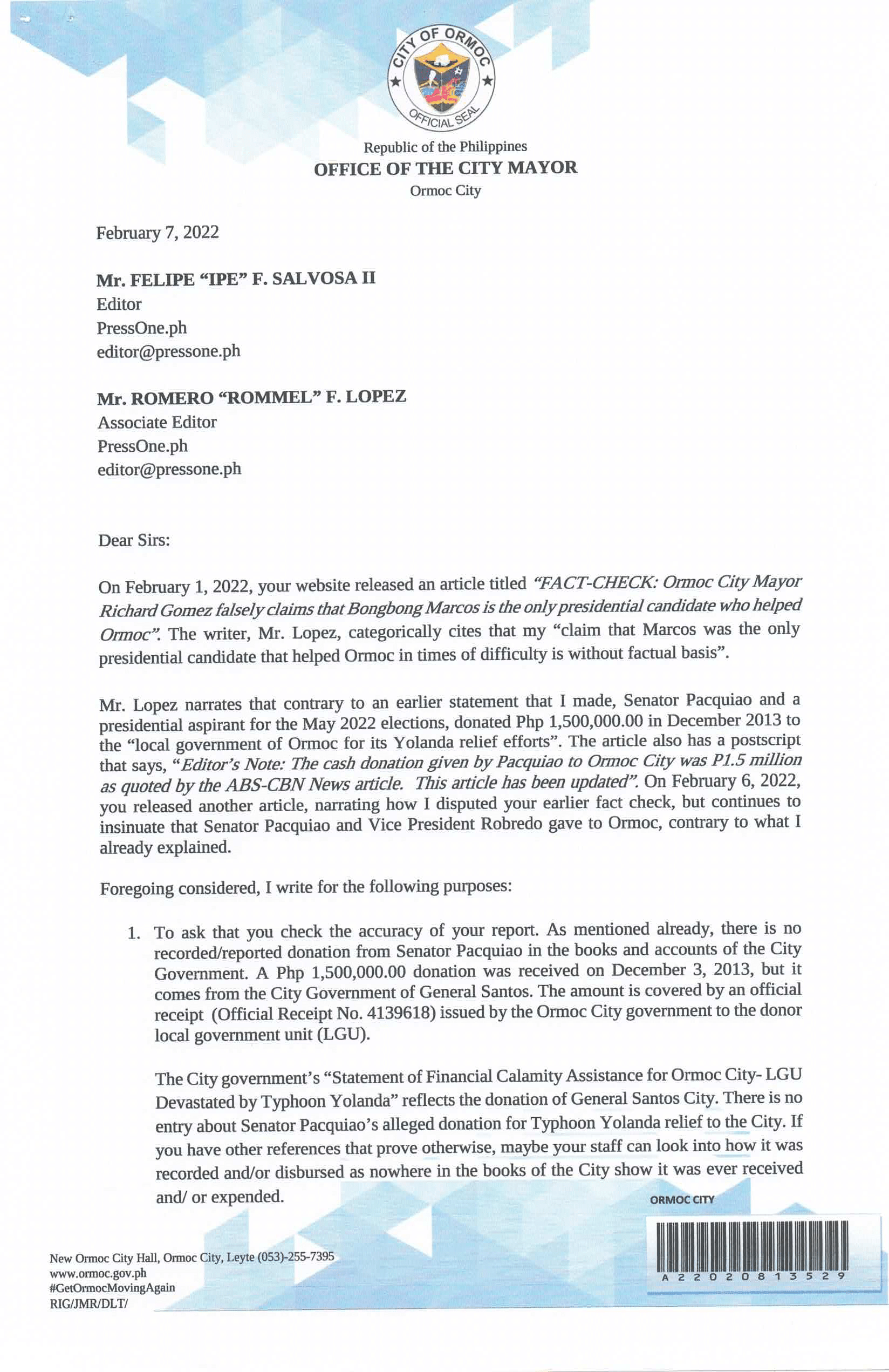 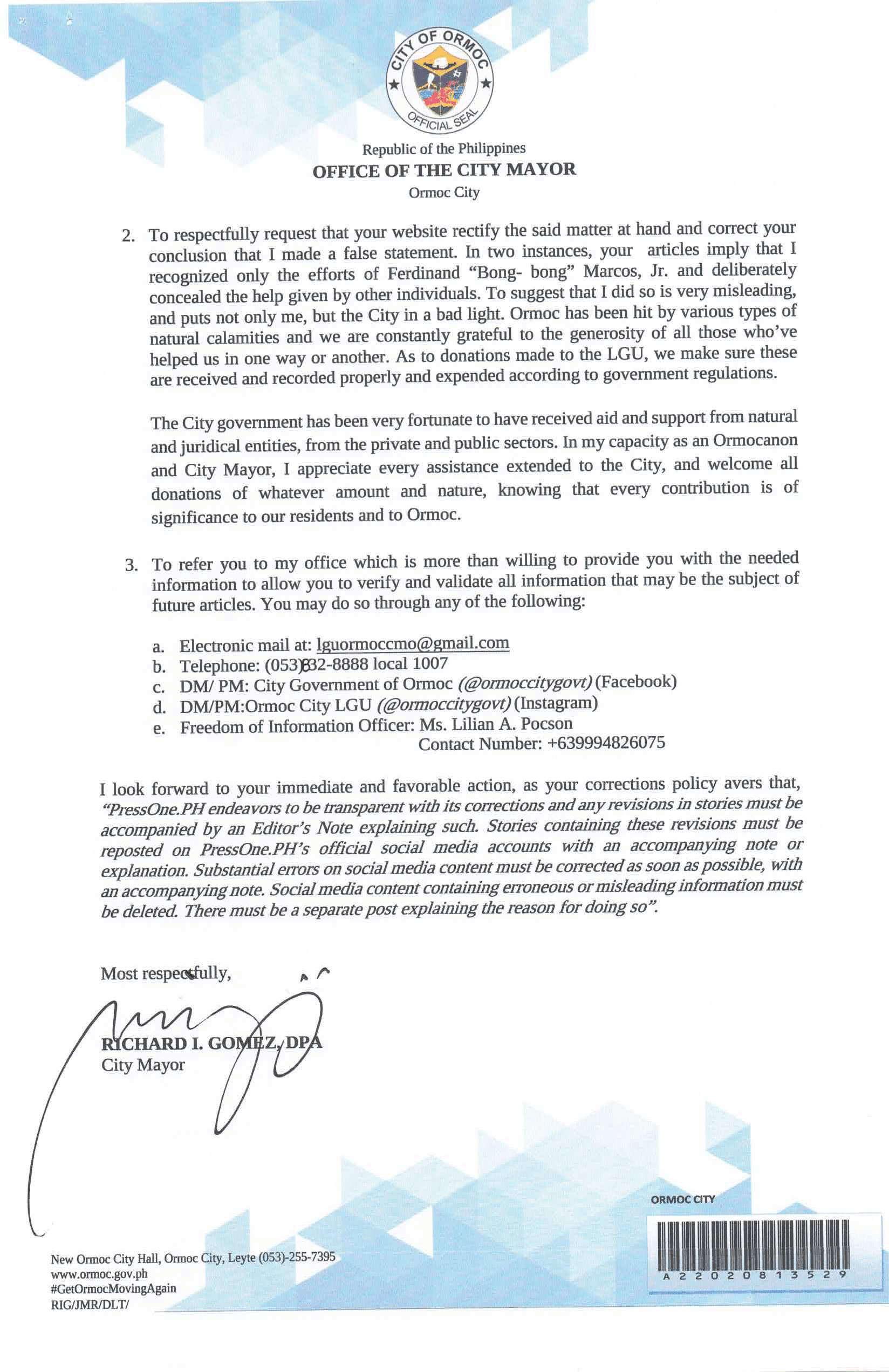 Mr. Lopez narrates that contrary to an earlier statement that I made, Senator Pacquiao and a presidential aspirant for the May 2022 elections, donated Php 1,500,000.00 in December 2013 to the “local government of Ormoc for its Yolanda relief efforts”. The article also has a postscript that says, “Editor’s Note: The cash donation given by Pacquiao to Ormoc City was P1.5 million as quoted by the ABS-CBN News article. This article has been updated”. On February 6, 2022, you released another article, narrating how I disputed your earlier fact check, but continues to insinuate that Senator Pacquiao and Vice President Robredo gave to Ormoc, contrary to what I already explained.

Foregoing considered, I write for the following purposes:

1. To ask that you check the accuracy of your report. As mentioned already, there is no recorded/reported donation from Senator Pacquiao in the books and accounts of the City Government. A Php 1,500,000.00 donation was received on December 3, 2013, but it comes from the City Government of General Santos. The amount is covered by an official receipt (Official Receipt No. 4139618) issued by the Ormoc City government to the donor local government unit (LGU).

The City government’s “Statement of Financial Calamity Assistance for Ormoc City-LGU Devastated by Typhoon Yolanda” reflects the donation of General Santos City. There is no entry about Senator Pacquiao’s alleged donation for Typhoon Yolanda relief to the City. If you have other references that prove otherwise, maybe your staff can look into how was recorded and/or disbursed as nowhere in the books of the City show it was ever received and/ or expended.

2. To respectfully request that your website rectify the said matter at hand and correct your conclusion that I made a false statement. In two instances, your articles imply that I recognized only the efforts of Ferdinand “Bong- bong” Marcos, Jr. and deliberately concealed the help given by other individuals. To suggest that I did so is very misleading, and puts not only me, but the City in a bad light. Ormoc has been hit by various types of natural calamities and we are constantly grateful to the generosity of all those who’ve helped us in one way or another. As to donations made to the LGU, we make sure these are received and recorded properly and expended according to government regulations.

The City government has been very fortunate to have received aid and support from natural and juridical entities, from the private and public sectors. In my capacity as an Ormocanon and City Mayor, I appreciate every assistance extended to the City, and welcome all donations of whatever amount and nature, knowing that every contribution is of significance to our residents and to Ormoc.

3. To refer you to my office which is more than willing to provide you with the needed information to allow you to verify and validate all information that may be the subject of future articles. You may do so through any of the following:

I look forward to your immediate and favorable action, as your corrections policy avers that, “PressOne.PH endeavors to be transparent with its corrections and any revisions in stories must be accompanied by an Editor’s Note explaining such. Stories containing these revisions must be reposted on PressOne.PH’s official social media accounts with an accompanying note or explanation. Substantial errors on social media content must be corrected as soon as possible, with an accompanying note. Social media content containing erroneous or misleading information must be deleted. There must be a separate post explaining the reason for doing so”.

Attached to this email is a certificate from Ormoc’s office of the city accountant which claims that “for the period from November 2013 up to present, the books of accounts of the Local Government Unit of Ormoc City has no record of cash assistance or donation for typhoon Yolanda from the person of Emmanuel/Manny Pacquiao.”