Re-introduction of draconian laws will not end rebel recruitment 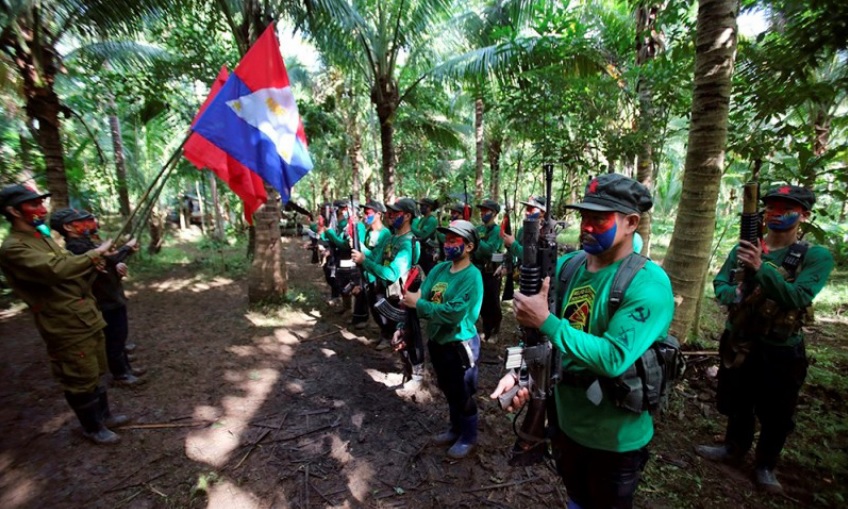 Photo from the Liberation International publication of the National Democratic Front of the Philippines (July 2017).

On Wednesday, security officials paraded in a legislative hearing some former Maoist-led guerrillas to denounce front organizations of the outlawed Communist Party of the Philippines (CPP) for recruiting students into the rebel cause.

One woman told senators she was brainwashed into leaving school and joined a band of New People’s Army (NPA) rebels in Bukidnon, describing the underground movement as a “godless” organization that did not practice what it preached, like class equality. Only guerrilla leaders were allowed to own and use mobile phones, she added.

The government has been struggling to defeat a communist insurgency for half a century in the poor but resource-rich countryside. More than 40,000 people had died in the conflict, one of the longest armed rebellions in the world.

Sen. Ronald “Bato” dela Rosa, a former national police chief, called a legislative hearing to seek ways to strengthen the country’s anti-terrorism laws and enact a measure to heighten the government’s fight against the communist insurgency, after some parents expressed concerns over rebel recruitment.

The Senate hearing also focused on a proposal by the former military chief, Interior and Local Government Secretary Eduardo Año, to resurrect a “dead” law, Republic Act 1700 or the Anti-Subversion Act.

The Cold War-era legislation was repealed in 1992 by then President Fidel V. Ramos, a former military and defense chief, as a gesture to lure the Communist Party of the Philippines to return to the negotiating table and end conflict.

The anti-subversion law, enacted in 1957 to suppress a rebellion by an armed group that started as an anti-Japanese organization during the Second World War – the Hukbalahap – punished mere membership in a pro-communist movement.

The law was, perhaps, effective against agrarian unrest in Central Luzon as top Huk leaders surrendered or fell into the hands of the government, prompting Secretary Año, a seasoned military intelligence officer who spent much of his career fighting the communist rebels, to suggest reviving the anti-subversion law as a measure to counter rebel recruitment on campuses.

However, Justice Secretary Menardo Guevarra raised some concern, saying “being a Leftist is far from being a terrorist,” a label used by security officials on members of the Communist party’s armed wing, the New People’s Army (NPA).

An opposition senator, Franklin Drilon has cautioned the government that the measure would violate the constitutional right to freedom of assembly and association as well as the equal protection clause of the Bill of Rights.

The recruitment of students in campuses and young men and women in poor and rural communities into the rebel movement will continue until the government addresses the root causes of the insurgency problem – poverty, ignorance, neglect, inequality and injustices.

Jorge Segovia, a retired army general who had commanded a military unit in the Davao region, a rebel hotbed, said people in poor rural villages were easily recruited into the rebel movement because they didn’t feel the presence of government in their areas.

When he was the military commander in the Davao region, Segovia brought the government closer to the barrios and discovered that the people were more concerned with swift justice than lack of food on the table, health care services and basic education.

Communist rebels were always there to mete out instant justice even without due process, he said, punishing cattle rustlers, land grabbers, and even petty criminals who had committed murders and rape. Abuses done by local authorities, including soldiers, police and militia members, also drove people into the arms of the rebels.

The communist insurgency began as an agrarian problem. The rebellion was not fully suppressed even if the administrations of Ramon Magsaysay and Carlos Garcia did end the Huk problem in the 1950s. It resurfaced in the late 1960s on the sugarcane fields of Central Luzon and bloomed during the repressive regime of Ferdinand Marcos who imposed martial law in 1972.

Widespread corruption and human rights abuses by Marcos’ security forces helped Jose Maria Sison, a former university professor, recruit and swell the ranks of the NPAs, which grew from a few dozens in 1969 to more than 25,000 guerrillas by the time Marcos was removed by a popular uprising in 1986.

The democratic space and the improvement in the image of security forces under Corazon Aquino and the economic growth under Fidel V. Ramos contributed to the counter-insurgency strategy, cutting down rebel forces’ strength to a little above 5,000 in the mid-1990s or within a decade.

The rebels’ numbers grew again during the brief period Joseph Estrada was in power and the succeeding administrations, up to the time of Rodrigo Duterte struggled to defeat about 3,000 NPA rebels as the insurgency problem impacts growth and development in the countryside.

The re-introduction of draconian laws, like the anti-subversion act, will not help stop rebel recruitment on campuses and end the insurgency. It may only give the communist movement more ammunition in its protracted war to unseat the government.

The only way to address the problem is to remove the root causes of insurgency. Bring the government closer to the people, crack down on corruption, observe the rule of law and make the justice system work. Improve the qualify of life by removing inequality and providing equal opportunity.

No amount of deception and brainwashing will work if only the government will do its job better. A military solution alone will not work. But a “whole of government” approach driven by repressive measures will neither work. Secretary Ed Año knows it, but he must listen and learn from a better intelligence officer, like Segovia.