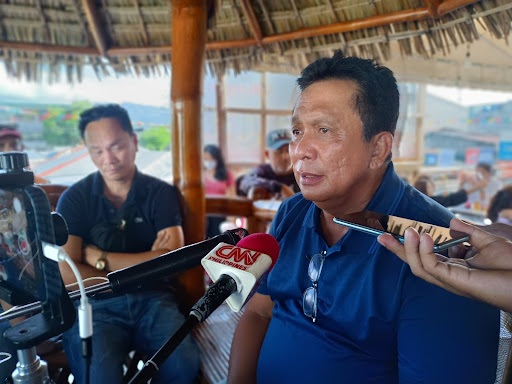 Governor Roel Degamo with a sigh of relief after a week of waiting for his return to the Provincial Capitol occupied by former Gov. Pryde Henry Teves. | RYAN SOROTE

Degamo did not immediately report to the capitol after the explosive and ordinance and K9 units of the Negros Oriental Provincial Police Office inspected the capitol.

Director Locadio Trovela of the Department of Interior and Local Government in Central Visayas announced Teves’ decision to leave the capitol after a week of negotiations and dialogue.

Lawyer Ferdinand Topacio, one of Teves’ legal counsel had advised his client to stay in the capitol while waiting for the Supreme Court (SC) action on the Temporary Restraining Order (TRO) they filed to prevent Degamo’s assumption to office.

Topacio earlier questioned the writ of execution of the Commission on Election (Comelec) en banc which favored Degamo, describing it as “illegal” and “wrong.” 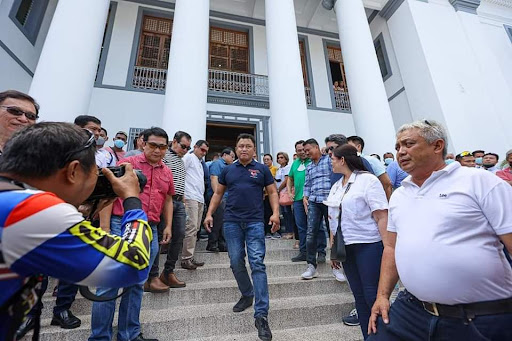 However, the SC took no action on the TRO. “The application for temporary restraining order in the portion was also taken up during the deliberations today, and Court took no action,” SC’s press release said Tuesday.

Without a TRO, Teves decided to leave the capitol in order not to “hamper government services” of the province. “I have promised to step down when there’s no TRO from the Supreme Court,” Teves said in a mix of English and Bisaya. “I can’t let the people (of the province) suffer because of me.”

The SC granted the motion of the Solicitor General, representing the Comelec, for a 30 day extension to send their reply as respondent to the case filed by Teves.

Lawyer Richard Enojo, provincial administrator and legal counsel of Degamo, told PressOne.PH that they have already submitted their reply to the SC.

“There’s no more TRO. We are already waiting for the decision of the SC,” Enojo said.

However, an election lawyer who requested anonymity corroborated Enojo’s statement that a TRO from the SC is unlikely. The lawyer said a status quo ante order would likely be issued or a decision on the main case itself. “Anything is possible with the SC,” the lawyer explains.

The ante order means that things before the issuance of Comelec’s writ of execution will be restored. Or in this case, Teves will return as governor of the province.

“We don’t want to be presumptuous of the SC,” Topacio said. “But the status quo ante order would be beneficial for us.” – Ryan Christopher J. Sorote