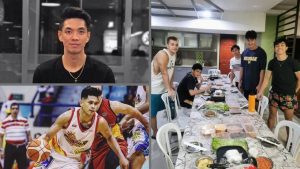 As varsity players of old tell stories of their playing years on social media amid controversies surrounding the University of Santo Tomas (UST) Growling Tigers, Rain or Shine Elasto Painter Javee Mocon asserted the need to stave off cross-generational comparisons and focus on the real issue: mistreatment of players.

“No offense to these guys but please don’t make the players look bad,” Mocon wrote on Facebook. “They were mistreated, ‘yun ‘yung puno’t dulo.”

Ex-Tigers team captain CJ Cansino recently made public UST players’ grievances over being served poor food and having their illnesses unattended by coaches and managers during their stay in Sorsogon for a training camp.

Some veteran players found the complaints petty and minor compared with living conditions during their time.

But differences in living conditions only show growing support for athletes, Mocon said.

Twelve-year PBA vet and De La Salle University alumnus William “Willy” Wilson echoed Mocon’s take: “It kind of turned into a contest on who had the most difficult path to success, instead of on the issue that these young men shouldn’t have been placed in that position in the first place.”

UST athletics officials are under fire for allowing the Tigers to participate in a training bubble in Sorsogon amid the Covid-19 pandemic. The university, however, has yet to conclude its investigation and reveal who spearheaded and gave permits for the activity.

The alleged training bubble could be more than a breach of government-set quarantine protocols which ban amateur teams from conducting practices and prohibit persons aged under 21 from going outside of their homes unless absolutely necessary.

The Commission on Higher Education said it would be ready to impose sanctions should it find UST accountable for violating the Education Act of 1982 over putting students’ health at risk.

The Tigers could also face suspension over possible violations of UAAP rules, which adhere to guidelines of the Philippine Sports Commission, Games and Amusements Board and the Inter-Agency Task Force on Emerging Infectious Diseases. John Ezekiel J. Hirro