A vlogger is recirculating on Facebook the debunked claims of a discredited ex-World Bank employee that the late dictator Ferdinand Marcos put the world’s gold reserves into a trust fund ‘for the benefit of humanity.’ 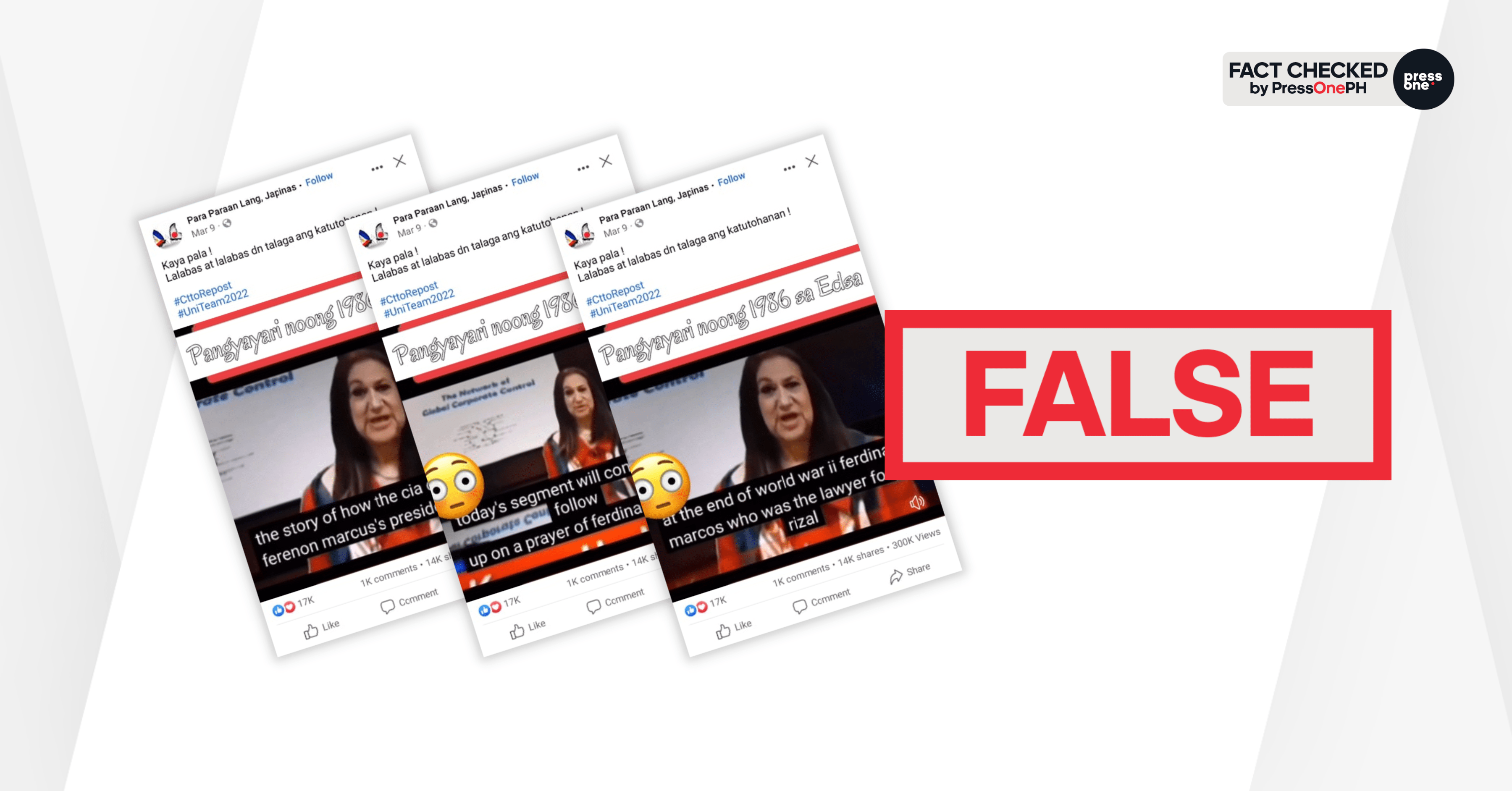 Claim: The late dictator Ferdinand Marcos lawyered for Jose Rizal and put the world’s gold in a trust fund for all of humanity

A vlogger is recirculating on Facebook the debunked claims of a discredited ex-World Bank employee that the late dictator Ferdinand Marcos put the world’s gold reserves into a trust fund “for the benefit of humanity.”

Japinay Tomodachi’s Facebook page “Para Paraan Lang, Japinas,” posted on March 9 a grainy clip of a seven-year-old Youtube video by Karen Hudes that traffics on conspiracy theories and outright falsehoods. The post has been shared 14,000 times.

Hudes was disowned by the World Bank way back in 2014 for misrepresenting herself as “acting general counsel” of the multilateral institution. In a statement, the World Bank said “Karen Hudes has not been employed by the World Bank since 2007 and is in no capacity authorized to represent any arm of the World Bank Group. Any claims otherwise by Ms. Hudes or her proxies are false and should not be viewed as credible.”

In the video recycled by Japinay, Hudes makes that outlandish claim that:

“At the end of World War 2, Ferdinand Marcos, who was the lawyer for Jose Rizal, the superior general of the Jesuits at the time, put the world’s international monetary gold reserves and other wealth into a trust called the Global Debt Facility for the benefit of humanity for 50 years.”

Hudes betrays her utter lack of knowledge of Philippine and world history – Jose Rizal was martyred by the Spaniards in Bagumbayan (now Rizal Park) on Dec. 30, 1896 and did not live to see the end of World War 2; he was never a member of the Jesuit order, the Society of Jesus, much less a superior general.

Rizal was mentored by the Jesuits and studied in their school, the Ateneo. The Jesuits have been the subject of numerous conspiracy theories, owing to their influence in world affairs. But Rizal was never their superior general; by the end of the war, the order was governed by the French Jesuit Norbert de Boynes, who bore the title vicar general.

As for the fabled gold, this story has had numerous versions, all of them debunked. For instance, see Pulitzer winner Manny Mogato’s column here. The late historian Bob Couttie wrote that the spread of fantastic tales about Marcos and his supposed gold hoard was meant to convince people that the Marcoses were wealthy and did not steal money from public coffers. That is, of course, untrue.