Sen. Sherwin Gatchalian, former senator Antonio Trillanes IV, and many local politicians are top ad spenders on Facebook a year before the polls. The Commision on Elections is drafting rules to govern online campaigning. 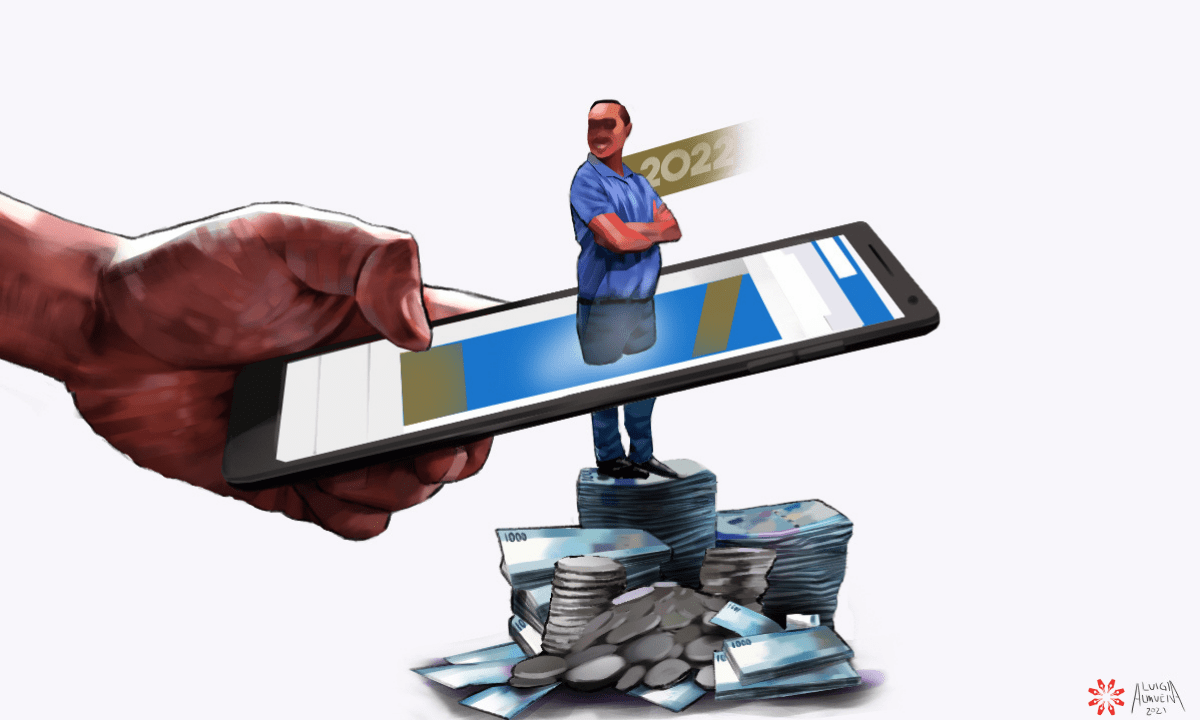 Potential candidates have started advertising on Facebook more than a year before the May 2022 elections, spending several thousand to a few million pesos since August 2020, data from the social media platform showed.

A significant shift to online campaigning is expected during the 2022 elections, especially with mobility restrictions imposed during the pandemic, although in-person activities will remain a staple of the campaign, according to Eric Alvia, secretary general of poll watchdog National Citizens’ Movement for Free Elections (Namfrel).

“Less people now read newspapers, and with the shutdown of ABS-CBN, there are less media outlets covering the news. People are gravitating towards social media,” Alvia told the Philippine Center for Investigative Journalism (PCIJ).

Sen. Sherwin Gatchalian has spent P4.5 million boosting more than 600 Facebook posts over the past eight months, while former senator Antonio Trillanes IV and his supporters spent more than P1 million to promote a total of 45 posts.

They are the two biggest ad spenders so far on the social media platform among potential national candidates. It’s an average of P562,250 in ad spending a month for Gatchalian and about P130,000 a month for Trillanes.

Gatchalian’s Facebook ads were mostly about his stand on issues, particularly on the education and energy sectors. These were pushed through Gatchalian’s official Facebook page “Sen. Win Gatchalian,” which has more than two million likes and followers, as of this writing.

Trillanes advertised his page and his posts accusing President Duterte of corruption. One of the pages supporting the senator — “We support Trillanes 2022” — also showed bills he authored and sponsored. In some posts, both pages used the same graphics.

Other potential candidates have also started advertising on television and radio. Taguig Rep. Alan Peter Cayetano ran an ad that called for the passage of House Bill No. 8597, which seeks to provide each family with P10,000 in cash assistance.

Several ground activities have also been arranged nationwide, including gatherings in support of the presidential candidacy of the survey frontrunner, Davao City Mayor Sara Duterte, the president’s daughter. On Facebook, a few supporters paid for ads to promote her, too.

All these advertisements outside the official campaign period, which begins three months before the polls for national candidates, are not considered premature campaigning. They are not covered by election rules limiting campaign spending based on a 2009 Supreme Court ruling on a petition that sought to ban these early advertisements.

Other early advertisers on Facebook among potential national candidates included Antique Rep. and former senator Loren Legarda, who spent over P400,000; and Sen. Juan Edgardo Angara, who spent more than P200,000 although his second term in the Senate will not end until 2025.

The Digital 2021: Global Overview report showed that Filipinos spent more time than any country in the world on the internet, particularly on social media. The report was conducted by creative agency We Are Social and social media management platform Hootsuite.

More candidates will be relying on social media for advertising, said Rona Caritos, executive director of the Legal Network for Truthful Elections (Lente). She noted how online campaigning, which was previously only used by national candidates during the 2016 polls, has been tapped by local candidates beginning the 2019 midterm polls.

“[Political advertising] will no longer be concentrated at the national level, especially as most Filipinos are scrolling down their Facebook feeds and are on their phone screens because of the pandemic,” she said.

These are data available to the public through Facebook’s Ad Library, a searchable database of ads across Facebook and Instagram. It shows the posts that were boosted on the social media platforms and who paid for them.

There are 4,000 ads in the Facebook database so far, although product placements such as those by Chowking PH, the World Food Programme, and Spotify were included in the database.

It is also intended to mitigate foreign interference in elections. “We’ve been involved in more than 200 elections around the world since 2017. We know that every election is different, so we take this experience and work closely with local experts to learn what’s most useful to mitigate risks and prevent interference,” Amador told PCIJ. 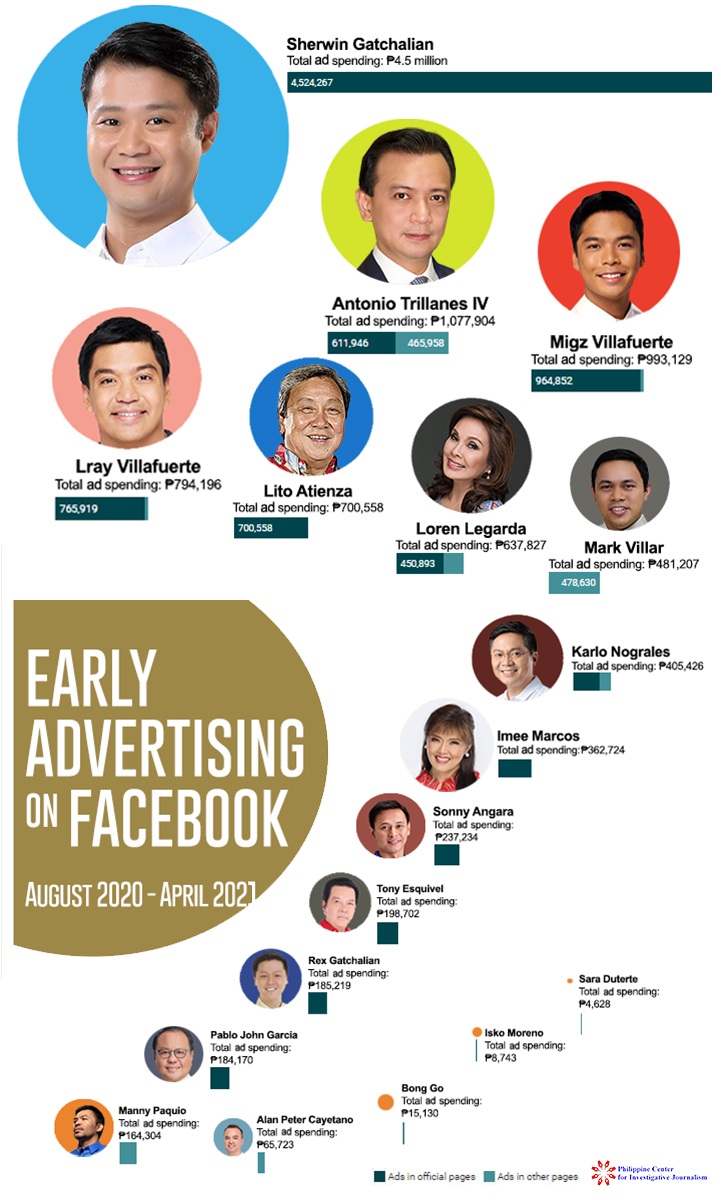 The Ad Library shows that several potential candidates in the 2022 elections have started advertising on the social media platform more than a year before the May 2022 polls.

“In certain cases, if an ad is already running and it’s about elections or politics, it can be flagged by automated systems or reported by our community. These ads will be reviewed again and if found to be violating our policy by missing a disclaimer, we will also take it down and require they complete authorizations to continue running it,” Amador said.

James Jimenez, Commission on Elections spokesperson and director for education and information, welcomed the activation of the monitoring tool in the Philippines.

“It’s very important,” he told PCIJ. It will be useful in monitoring election advertising online and make sure candidates will follow spending limits, he said.

“It’s inescapable that Facebook will be a major factor [during the campaign], but hopefully it’s not the only social media platform that people will use,” said Jimenez.

Candidates are mandated to register their web sites and social media pages, including those that endorse the candidates, and report how much they have spent on advertising. However, monitoring was impossible in previous elections and candidates did not report it, said Lente’s Caritos.

While the Facebook Ad Library shows how much the candidates spend on the social media platform, it is not clear yet how Comelec will treat the ads paid for by their supporters.

“That’s the challenge. What happens if you are a supporter and you boost your blog post that’s promoting someone’s candidacy? We’re still making the rules for that,” Jimenez said.

Beyond monitoring the candidates’ spending, Jimenez, Alvia, and Caritos expressed concerns about misinformation and disinformation spreading online during the campaign.

Other than Facebook, Caritos sees the need to also monitor YouTube as she expects candidates turning to the “largely unregulated” platform for unscrupulous activities.

“They will be uploading YouTube videos that spread disinformation, change the narrative, and show ‘alternate realities’. That’s something we will see,” Caritos said.

Namfrel’s Alvia said even short video formats, like those on TikTok and Instagram, would likely be used in online campaigning to boost engagement and recall.

He said the 2022 campaign might particularly see a lot of discourse on Covid-19-related assistance from politicians, including, but not limited to, social amelioration, access to vaccines, and livelihood support.

“Social media is more accessible to a lot of people and the content is easier to digest but not necessarily correct,” Alvia said. “Kanya-kanyang version ng katotohanan (People will be coming in with various stories of their own).” — PCIJ.org