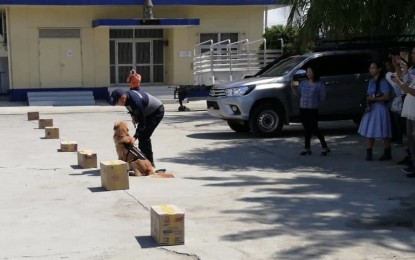 Poochie, a Golden Retriever, shows his pork-sniffing capabilities by sitting beside a box containing pork meat during a demonstration at the Philippine Coast Guard (PCG) headquarters in Pier 3, Cebu City on Thursday. (PNA photo)

In compliance to the orders of Cebu Governor Gwendolyn Garcia to totally ban live hogs, pork, and pork products from Luzon, Commodore Ronnie Gil Gavan, chief of PCG 7 (Central Visayas), endorsed the deployment of a Golden Retriever named Poochie to the ports of Cebu and Bohol to assist the local task force in protecting the province against the threat of ASF.

Poochie was presented by Lt. Junior Grade Michael Encina, spokesperson of PCG-7 during a demonstration at their headquarters in Pier 3. The newly-trained pork-sniffing dog showcased its capability to detect pork and pork products inside a box.

This initiative of training the first-ever pork-sniffing dog of PCG in the country was to support the effort of the provincial government against the spread of the hog disease through executive orders that ban the entry of live hogs, pork, and pork products from the northern portion of the country.

The PCG K-9 team started training 18-month-old Poochie, on August 1, by exposing its sense of smell to pork and pork-related products.

Poochie would be positioned randomly to various parts of Cebu and Bohol while in the middle of training. This move is to prevent various sneak in attempts of pork and pork products from Luzon despite the standing order for its total ban for 100 days.

Poochie is among the 20 dogs under the care of the PCG K-9 team while others were trained for narco-sniffing, search and rescue, and bomb detection.

The PCG was hoping that they would get another dog to help the police from the 30 pork-sniffing dogs undergoing training in Manila.

Encinas revealed that Poochie was converted into a pork sniffer from being a narco sniffer to provide support the demand due to possible ASF in the country.

He guaranteed the sniffing accuracy of Poochie as he revealed that a dog has 20,000 olfactory nerves, which means they have 20,000 more capability to smell even masked objects repeatedly exposed to its sense of smell. (RJ Espartinez)