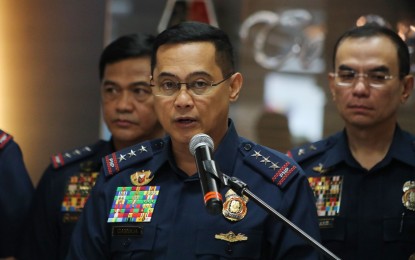 The Philippine National Police (PNP) implemented a wide-ranging reshuffle of some key positions in its ranks in line with President Rodrigo Duterte’s directive for a total revamp of the scandal-racked agency.

PNP Officer-in-Charge Archie Gamboa ordered the re-assignment of some 22 senior police officials covering some of the top and most coveted posts.

“Beginning today all key positions are under probation for 3 months and all promotions are on hold and I will make sure the axe will fall where it should if these leaders to don’t deliver results,” Gamboa said.

Gamboa admitted not all police officials were happy with their re-assignments with some even questioning the method and criteria for their relief.

But the PNP OIC quickly brushed off these concerns and said his decision was final and that he continues to enjoy the support of the entire police force.

Gamboa is one of the prime candidates together with Lt. Gen Camilo Cascolan and Major General Guillermo Eleazar to replace resigned PNP Chief General Oscar Albayalde at the helm of the PNP.

Gamboa stressed the programs he is implementing are meant to address immediate concerns and it is up to the next chief PNP whether to continue them.

“Kung sino man ang uupo na Chief PNP he is answerable not only to the president, not only to the PNP but also to the public. So he may or may not continue that but again this is what is required at this time,” he said.

Meanwhile, Albayalde is facing almost the same charges filed against the 13 rogue cops involved in the controversial 2013 Pampanga drug raid including falsification of public documents and dereliction of duty.

Authorities said there is circumstantial evidence that Albayalde could be liable for the botched drug raid. He is accused of protecting his subordinates who allegedly sold confiscated illegal drugs.

The controversy forced him to step down before his retirement on November 8th. But he has repeatedly denied any wrongdoing.

The palace kept its hands off the case.

“If they feel they have a case against anyone they are free to do so. They can file and let the law take its course,” Palace spokesperson Salvador Panelo said.

The three were part of the 2013 Pampanga operation. They are also being tagged in a supposedly anomalous drug operation in Antipolo, Rizal last May.  PLt. Joven De Guzman will also be suspended for two months due to command responsibility.

President Duterte has yet to pick a new PNP Chief and has cancelled a scheduled turnover ceremony in Camp Crame on October 29. (Jasper Camilo)