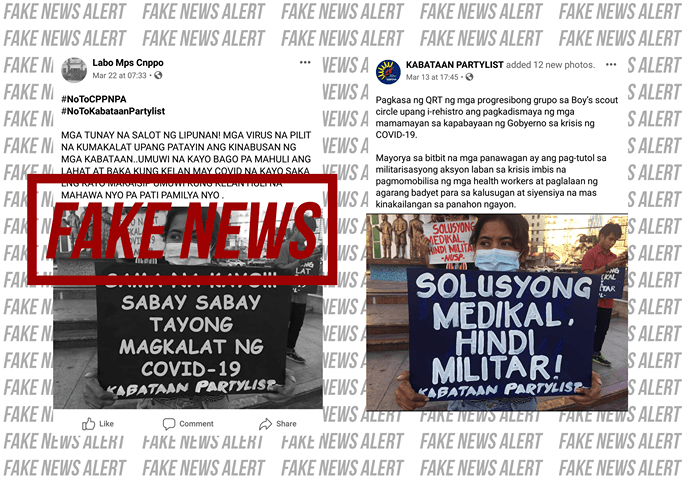 A side by side comparison of the now deleted Labo Camarines Norte PNP’s Facebook post and the original post of Kabataan Partylist showing the difference in the message printed on the placard held by an unidentified member of the youth group.  (image courtesy of Kabataan Partylist)

Progressive partylist group Kabataan slammed a post from a Philippine National Police (PNP) precinct’s Facebook page showing an altered image of one their protesters carrying a sign inviting everyone to join them to spread the deadly coronavirus disease 2019 (COVID-19).

The photo was accompanied with this message:

The original message of the photo reads “Solusyong Medikal, Hindi Militar”.  The group was protesting the actions taken by the national government to address the continuing thread of COVID-19.

Kabataan Deputy Secretary General Diana David strongly condemned the post and demanded the police station to take down the photo and issue a public apology.

In a message to PressONE.ph, David called the post “fake news” insisting that the photo was altered and that the group would never say such a thing

She expressed her dismay of how the Labo PNP station took the time and effort to edit the photo and spread it online.  She added that this was done to their group by other Facebook pages of other PNP precincts, though did not specify which Facebook pages were they.  Kabataan, she said, had reported these cases but nothing was done about it.

In an interview with PressONE.ph, the administrator of the Labo PNP Facebook page said the post had been deleted.

“Nadelete na po namin yung post..sorry for the wrong actions and sana mas makita natin yung tamang ginagawa ng pnp labo as shown in most of our posts,” the admin, who refused to identify himself, said.

The Facebook page admin lamented that such a post should not have been the subject of attention of the people as these errors are “small” and the good things the station is doing to the community should be highlighted instead.

He admitted, though, that the photo was “mistakenly downloaded” from another Facebook account and that they did not edit the photo.

He added that their actions were motivated by their desire to inform the public of the actions of the Communist Party of the Philippines (CPP) in compliance to President Rodrigo Duterte’s Executive Order 70 which aims to end the local communist insurgency in the country.

The Facebook administrator noted that Kabataan should not be conducting public protests during a national public health emergency.

Kabataan is the first and only youth party-list group in Philippine Congress today.  It has been accused as being the recruitment arm of the CPP’s armed wing, the New People’s Army (NPA).  In a Senate hearing, parents of “missing minors” accused Rep. Sarah Jane Elago, the partylist’s representative in the House of Representatives, of convincing their children to join the New People’s Army (NPA), the armed wing of the Communist Party of the Philippines (CPP).

Elago called the Senate probe “slanderous and malicious”. She adds the probe is targeting left-leaning groups in colleges and universities and members of the academe speaking out against the Duterte administration.

The recently passed “Bayanihan to Heal as One Act” punishes individuals or groups spreading fake news or disinformation online.

Section 6(6) penalizes” individuals or groups creating, perpetuating, or spreading false information regarding the covid-19 crisis on social media and other platforms, such information having no valid or beneficial effect on the population, and are clearly geared to promote chaos, panic, anarchy, fear, or confusion” of an imprisonment of two (2) months or a fine of not less than Ten Thousand Pesos but not more than One Million Pesos, or both such imprisonment and fine, at the discretion of the court.”

However, former Supreme Court spokesperson Ted Te said, in an interview with Rappler, that there is no law that punishes, or even defines, fake news.

“Since there is no law that criminizalizes or defines fake news as a crime, and the special powers law does not also define what fake news is, it cannot be criminalized. That would be void,” Te said.