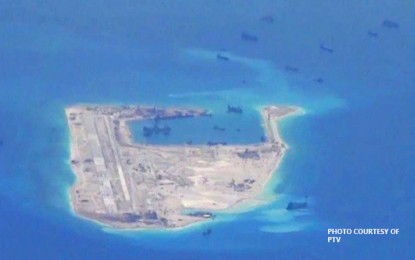 Foreign Affairs Sec. Teodoro Locsin Jr. assured the public that the Philippines had filed diplomatic protests over China’s island building activities in the West Philippine Sea (WPS) that led to the destruction of marine life.

Locsin was reacting to a lecture by American Marine Biologist Prof. Kent Carpenter on environmental damage to coral reefs in the WPS.

Carpenter presented photos from January 2012, March, April, and June 2015 which showed the construction and the sedimentation around Mischief Reef.

Carpenter said China is responsible for most of the destruction in the WPS.  He urged Manila to keep up the diplomatic pressure on Beijing because the destruction is a disadvantage to Filipino fishermen.

Meanwhile, China urged the United States to stop what it calls provocative acts in the South China Sea citing the frequent deployment of US warships to the disputed region.

The US military confirmed the littoral combat ship, USS Gabrielle Giffords, sailed near Mischief Reef in the Spratly Islands on Wednesday and the guided-missile destroyer, Wayne E. Meyer, passed the Paracel Islands on Thursday without seeking authorization.

The US Navy conducts what it calls freedom of navigation operations by ships close to some of the islands China occupies, asserting freedom of access to international waterways, and angering China in return.

China claimed almost all of the energy-rich waters of the South China Sea where it has established military outposts on artificial islands. The Philippines, Brunei, Taiwan, Indonesia, Malaysia and Vietnam have competing claims in parts of the sea.  (Jasper Camilo)