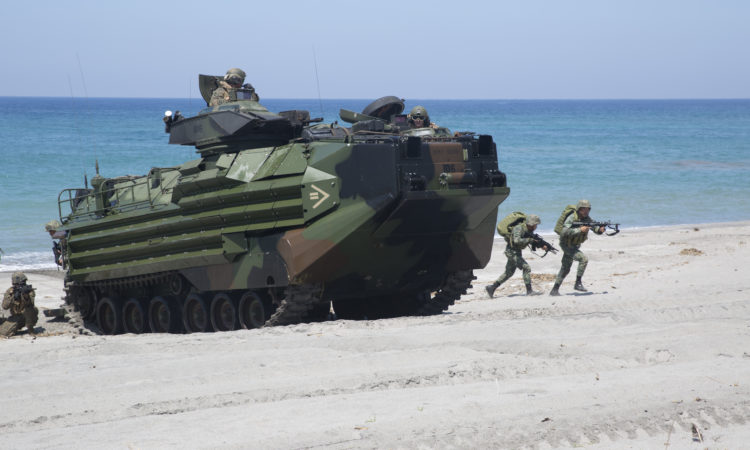 The Japanese military has landed anew.

Nearly eight decades ago, the Japanese troops were enemy forces. Today, they are part of friendly forces training with American and Filipino Marines in various parts of the country, including in areas near the disputed South China Sea.

In the past, the drills were called “Phiblex,” until President Rodrigo Duterte, in one of his speeches, ordered the defense and military establishments to scrap the bilateral training activities because these were irritating China. It was at a time the Philippines was trying to repair strained relations with Beijing after Manila filed an arbitration case in The Hague in 2013, which it won three years ago.

There was nothing wrong and illegal every time local troops trained and held conventional military exercises with their American counterparts because the Philippines had signed a Visiting Forces Agreement (VFA) with the United States in 1998. It was ratified by the Senate the following year and the first “Balikatan” exercises were held in 2000.

Bilateral joint and combined exercises are among activities allowed under the 1951 Mutual Defense Treaty, the country’s only existing security alliance with a long-time ally and former colonial master. But the exercises were stopped in the mid-1990s after the Americans were kicked out from their two large overseas military bases in Clark and Subic.

The drills continued for two to three years when the Philippines granted visiting American troops “A&T” status, a diplomatic courtesy given to administrative and technical staff. But the status was problematic because thousands of US troops came to the Philippines for two-week exercises. Thus, a status of forces agreement (SOFA) was needed and an acceptable term, “VFA,” was negotiated and agreed upon.

The presence and participation of Japanese soldiers in annual exercises like “Kamandag” (“Kaagpay ng Mandirigma sa Dagat”) is a welcome development, as the Philippines expands its security cooperation with allies and partners in the Asia-Pacific region.

This is actually the second year Japan is sending troops to “Kamandag” activities. Last year, a Japanese soldier died in a vehicular accident in Subic, which exposed the Japanese role in the Marines-driven drills. This year, the Philippines will be using for the first time its newly acquired Amphibious Assault Vehicles (AAVs) purchased from South Korea in amphibious landing operations with the US Marines. The AAVs are to be launched from the two countries’ warships in the South China Sea.

The countries will also test their readiness to respond to threats from low-flying vehicles, particularly drones — a new capability in high-tech warfare that the Philippines has to learn and be familiar with.

Japan is perhaps the second most capable military force in this part of the world after the United States given its modern and advanced equipment and technology, although its armed forces are called “self-defense” forces.

Despite the limited and token Japanese participation in “Kamandag,” there could be a violation of local laws and the 1987 Philippine Constitution, which prohibits the presence of foreign troops in the country unless there is an agreement, like the MDT or VFA.

Japan had signed a strategic partnership deal during the administration of President Benigno Aquino III, but the two countries still have to sign a VFA that would allow Japanese soldiers to train and exercise with Filipino and American forces in the Philippines.

Two years ago, some low-level Japanese defense ministry officials visited the Department of Foreign Affairs and Department of National Defense to explore the possibility of securing a VFA. The Japanese officials were looking at two VFA models: Philippine agreements with Australia and the United States. At that time, Japan and Australia were negotiating a VFA.

Until Japan and the Philippines sign a VFA, the presence and participation of Japanese troops in a bilateral exercise with the United States is illegal and a violation of the Constitution, even if the US and Japan already have such an agreement.

Japanese Maritime Self-Defense Forces (MSDF) warships usually join the US carrier battle group when patrolling waters in the South China Sea and East China Sea, and the presence of Japanese ground troops in the Philippines during “Kamandag” exercises could be part of US deployment.

But it still not allowed under Philippine laws because only the Americans are allowed to deploy troops in the country under the MDT and VFA.

In mid-2000s, the United States signed with the Philippines another military agreement forming the Security Engagement Board, and allowing the deployment of US commandos under the Special Operations Command to conduct “Balikatan” drills in the southern Philippines. The SEB sought to correct and legitimize counter-terrorism drills between the US and the Philippines because the annual activities under conventional “Balikatan” exercises did not cover non-traditional military activities.

Under Aquino, the Americans further expanded the security agreement by securing four air bases — in Northern Mindanao, Cebu, Palawan and Central Luzon, and an army jungle training base in Nueva Ecija under the Enhanced Defense Cooperation Agreement (EDCA).

Past administrations had looked the other way and tried to skirt the constitution to allow Filipino soldiers to train and exercise with security allies and partners, but officials always found way to legitimize these military-to-military activities.

It took several years for the Philippines to agree to a Visiting Forces Agreement with the United States and Australia to allow their military forces to train and exercise anywhere in the country. Such exercises have been very beneficial to local troops in learning new tactics, new strategies and newer and modern Western military doctrines.

It is not too late for the Philippines to get Japan to sign a third Visiting Forces Agreement, to cement security ties with a former enemy and colonial master. The two security partners should start discussing a VFA and legalize the presence and participation of Japanese troops in the country.