PELIKULA journal 7 is out now! 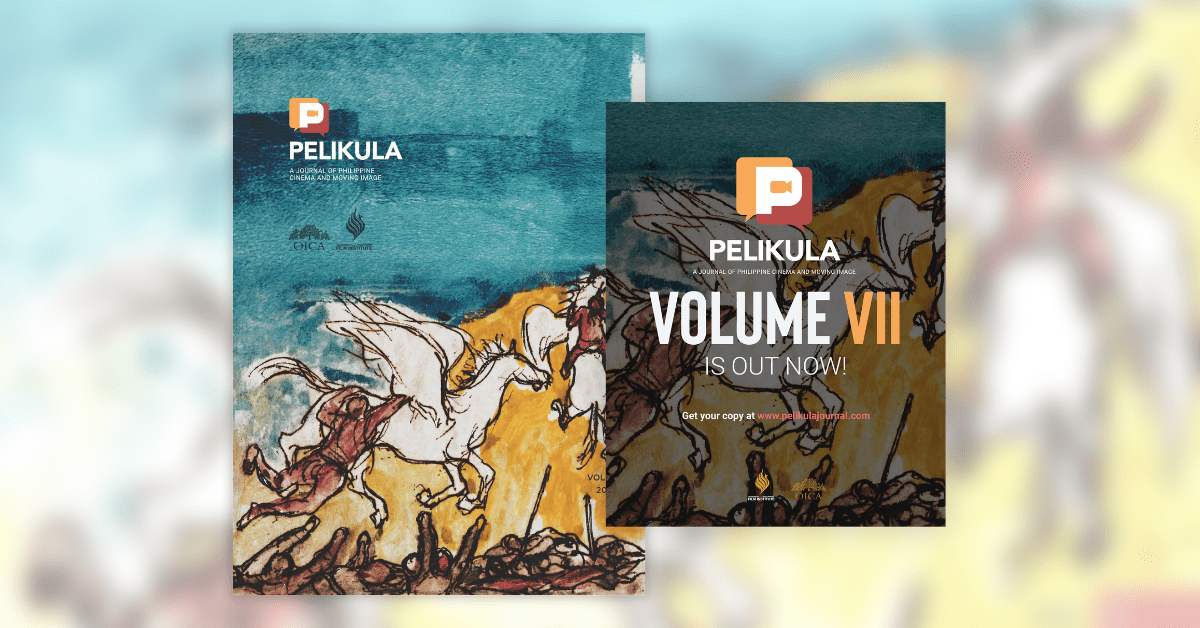 The seventh volume of PELIKULA: A Journal of Philippine Cinema and Moving Image launched online last  December 23 and can now be downloaded for free at www.pelikulajournal.com.

The seventh volume of PELIKULA: A Journal of Philippine Cinema and Moving Image launched online last  December 23 and can now be downloaded for free at www.pelikulajournal.com.

PELIKULA, published by the UP Film Institute (UPFI) with this volume supported by the UP Diliman Office  of Initiatives in Culture and the Arts (OICA), is edited by Patrick F. Campos, film scholar, programmer, and  previous director of the UP Film Institute. It was revived in 2019 as part of a series of activities to  commemorate the centennial of Philippine cinema and Jose Nepomuceno’s Dalagang Bukid. Curated for  specialists and general readers alike, it publishes academic research, thought pieces, reviews, interviews,  and visual essays.

According to Campos, “The volume also straddles the subject of collective and individual memory,  featuring a range of approaches to and performative writings expressing identity, place, mobility, and  becoming in cinema studies. In this way, the volume explores the spatiality of memory and history,  primarily mediated memory and history, either through critiques of films and moving-image works about  the diaspora, migrant workers, and the displaced or through the reflections of scholars and critics who  meditate upon their relationship with media.”

He furthers, “In this volume, we look at how cinema and moving images have anchored our  remembrances. We write to posterity about the events and processes of our current film culture as we  move away from the pandemic years—about bubble productions that occasioned long hoped-for changes  in industrial practices, online film festivals that brought films from the regions to a broader audience,  students engaged in fearless political filmmaking, and many others. More importantly, we mark the  traumas of recent and deep histories of conquest and violence, engaging in the labor of memory.”

The Kura Sambalani is a white-winged horse that appears at the end of the Tausug epic Parang Sabil (holy  warfare) to carry away the martyrs. The cover, designed by Pol Torrente using artwork by Danilo Dalena,  honors the memory of the departed that have been martyred and massacred by damnable regimes in  history, recent and long ago. It also signifies our present disposition, as we are yet near the ground but no  longer at rest and have taken off, geared up for what lies ahead. The colors invite our eyes to rest on the  image, to linger in thought, but the movement is dynamic and beckons us to move, now.

The journal’s breadth can be gleaned from the volume’s 31 articles. There are film reviews such as  Delikado and, and a review of the book on Martial Law Melodrama. There are essays on exhibits of  Imelda Cajipe Endaya’s Filipina DH and RESBAK’S Log Files, as well as on films Lingua Franca, Apocalypse  Now, and Platoon. There is coverage on the current filming landscape: bubble filmmaking, concerns of  young filmmakers, regional film festivals in the time of the pandemic, and recent political films produced  by student filmmakers. There are also articles that look to the past, such as archived photos of Elena  Jurado, a review of Empire’s Mistress, and visually captivating storyboard frames for Memories of a  Forgotten War by Danilo Dalena

While PELIKULA is currently finding ways to make the work sustainable while keeping the journal freely  available to the public, the journal will have fundraising activities in the coming months toward

completing the next volume. As you may well know, PELIKULA does not currently receive consistent  funding support. Thus, the editorial team welcomes donations of any amount thru the UP College of Mass  Communication Foundation, Inc. via this link: https://bit.ly/SupportPelikulaJournal.

For inquiries, you may send messages to pelikula.updiliman@up.edu.ph.