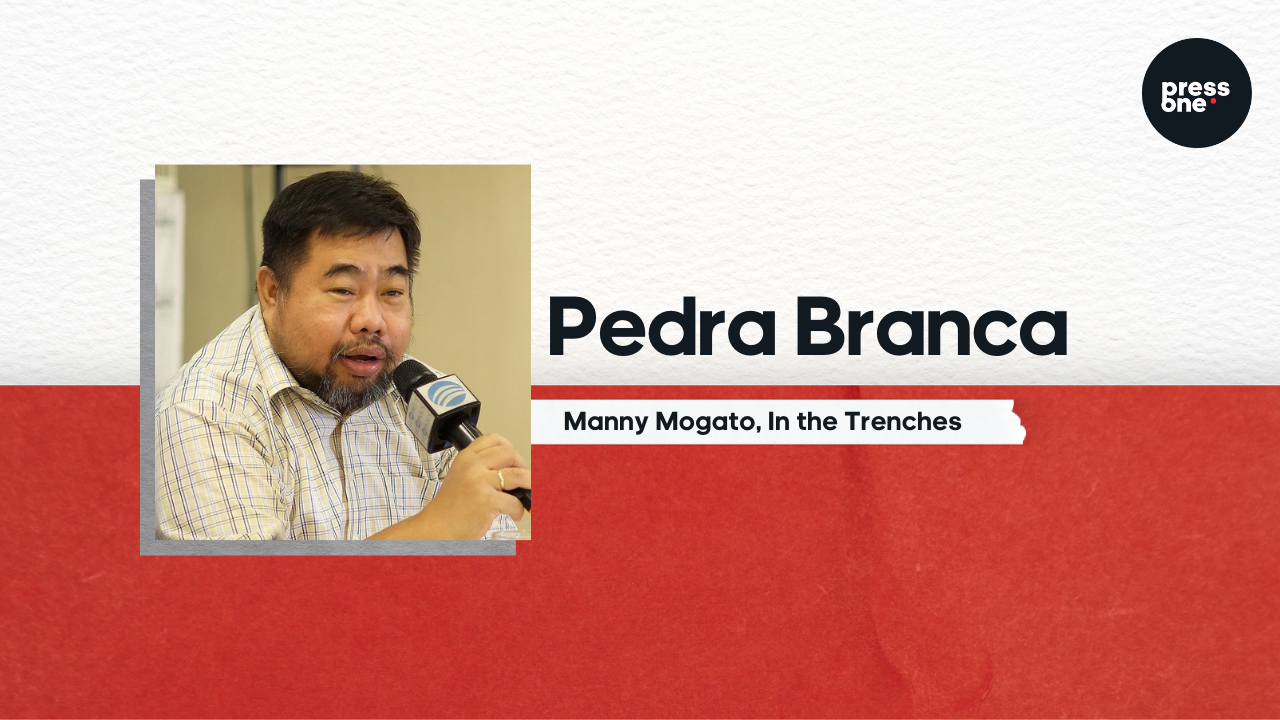 Twenty years ago, there was a study made by the National Defense College of the Philippines (NDCP), recommending the development of a maritime facility in Scarborough Shoal, a rocky outcrop within the country’s 200-mile exclusive economic zone in the South China Sea.

The NDCP wanted to put up a lighthouse, coastal radar and bunkers on the shoal, patterned after Pedra Branca, a tiny rock disputed by Singapore and Malaysia, about 24 nautical miles east of the island republic.

In 2008, the International Court of Justice (ICJ) awarded Singapore sovereignty over the rock but gave Batuan Tengah (middle rocks), a kilometer away from Pedra Branca to Malaysia.

More than a decade after the international court settled the territorial dispute, Pedra Branca remained an irritant between the two states after Singapore announced last year it was improving and expanding its naval facilities on the rocky outcrop.

The reclamation plan was probably in response to Malaysia’s setting up a naval base in Batuan Tengah, less than 10 nautical miles south of Johor, in 2017.

Tensions between Malaysia and Singapore over the rocky outcrops showed distrust among neighbors in Southeast Asia despite efforts by the Association of Southeast Asian Nations (Asean) to build a cohesive but diverse political, economic and social community, loosely patterned after the European Union.

Asean states protect their national interests by building military facilities on disputed areas, whether these are on islands, rocky outcrops and in border villages.

Pedra Branca is a classic example of how Singapore was protecting its claim after Malaysia drew a map in 1979 laying claim on the rock, known in the tiny island state as Pulau Batu Puteh. It had built facilities around the old Horsburgh lighthouse, which the British built in the 1850s.

Singapore was the Philippines’s close ally in the 1970s when it sent arms to the government of President Ferdinand Edralin Marcos to fight Muslim rebels in the south after the United States declined to support Marcos’s war in the south.

Singapore aided Marcos because it was at odds with Malaysia, which was providing sanctuary, training bases, and arms to the Moro National Liberation Front (MNLF).

The Philippine military looks up to Singapore as a model in its plans to strengthen its claims on the South China Sea. Marcos set up fortifications in eight features in the Spratlys in 1978, building the first airfield in Pagasa island or Thitu island, long before China built seven man-made islands a decade ago.

Pedra Branca was seen as an appropriate model for military development in Scarborough. In fact, a lighthouse was built on the rocky outcrop after the US forces were kicked out from Subic and Clark in 1992.

From the end of World War II until the eruption of Mount Pinatubo in 1991 and the decision of 12 senators to abrogate the 1947 Military Bases Agreement, the Philippines had no problem guarding Scarborough.

The US Navy was using the rocky outcrop as an impact area for its warships’ naval guns. It was the navy’s counterpart of Crow Valley, an aerial gunnery range in Tarlac used by the US Air Force and by a squadron of Singapore Air Force based in Clark.

But the Philippines forgot to upgrade its military facilities in the Spratly and on Scarborough Shoal. The lighthouse was allowed to deteriorate. The navy and coast guard also lacked ocean-going ships to patrol the Spratly and Scarborough.

China took advantage of the situation — the withdrawal of the US from its bases in Subic and Clark and the neglect of military installations in Spratly and on Scarborough. And the Philippines paid a heavy price.

Former president Rodrigo Duterte made it worse when he pursued an appeasement policy, hoping to reap economic benefits from getting close to China.

Six years later, only a small water system project and two token bridges were delivered by China out of the promised $24 billion in investments, grants and loans.

China has also increased its presence and activities in the disputed maritime areas, denying access to local fishermen to fishing grounds and blocking oil and gas exploration and the delivery of supplies to soldiers stationed at a rusting transport ship at Second Thomas Shoal or Ayungin shoal.

In 2016, the Philippines won a landmark legal case against China when the Permanent Court of Arbitration voided Beijing’s claim based on its historic rights on almost the entire South China Sea: the nine-dash-claim in 1949.

Under Lorenzana’s watch, military facilities in the Spratly were upgraded. Lighthouses were built and the existing unpaved runway was repaired. A beaching ramp to deliver construction materials was also completed.

It is not too late for the Philippines to assert its sovereign rights on Scarborough Shoal, not only by sending naval and coast guard patrols in the area but by building a lighthouse, a non-military structure that helps in commercial navigation in the area.

It is also possible to revive the proposal to put up structures similar to Pedra Branca. The National Security Adviser, Clarita Carlos, once headed the NDCP under former president Joseph Estrada. She could, perhaps, revisit the Pedra Branca proposal.

The late dictator started the country’s fortifications in the disputed areas in the South China Sea. His son, President Ferdinand “Bongbong” Romualdez Marcos Jr., is in a much better position to improve and expand the country’s facilities in the Spratly and on Scarborough Shoal.

Bongbong must take a second look at the Pedra Branca proposal. It could be his most dramatic display of patriotism to defend the country’s national interests, territorial integrity and sovereignty.