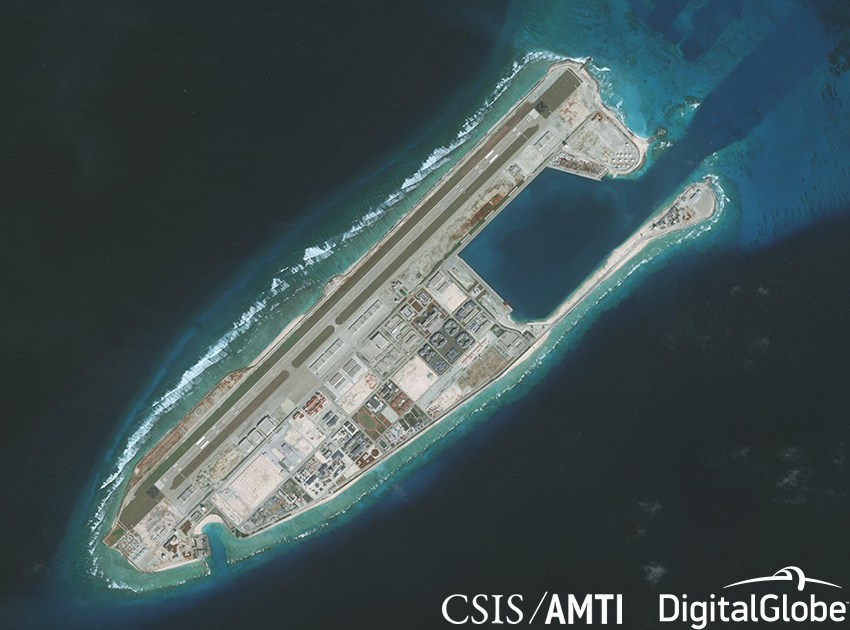 Satellite image of Kagitingan Reef in the Kalayaan Islands, a rock occupied by China. (From the Asia Maritime Transparency Initiative)

Opposition senator Francis Pangilinan lashed out at the Duterte government’s “pivot to China” on Friday, the third anniversary of the Manila’s arbitration victory against Beijing over the disputed West Philippine Sea.

In a statement, Pangilinan urged Filipinos to stand up to China’s “bullying” and assert the 2016 legal victory that invalidated China’s historic claim to the disputed waters based on its “nine-dash-line” map.

“The Philippines had stood up to the bullying by filing diplomatic protests, summoning Chinese ambassadors, arresting, prosecuting, fining, and eventually expelling Chinese (and other foreign) poachers,” he said.

“And there has not been any war. In any case, the cause of our fishermen, our territory, our children’s future is worth fighting for.”

Pangilinan said the Recto Bank alone was estimated to hold up to 5.4 billion barrels of oil and 55.1 trillion cubic feet of natural gas, according to a 2013 report from the United States Energy Information Administration.

“If we are able to harness the oil and gas, and protect our marine life in the West Philippine Sea, it would mean cheaper power and electricity, as well as seafood, for our consumers, and more income and food for our fisher folk,” he said.

Also on Friday, jailed senator Leila de Lima said she had filed anew a bill to declare July 12 a holiday to commemorate the Philippines’ legal victory against China.

“Exactly three (3) years ago, or in July 12, 2016, the [Permanent Court of Arbitration] ruled in favor of our country as it declared the so-called ‘nine-dash line’ claimed by China as invalid and without legal basis to claim historic rights to resources within the [West Philippine Sea],” she said.

“This is why I refiled a bill to mark July 12 of every year as a Special Working Holiday to honor the landmark decision in Philippines v. China and to commemorate this momentous victory as a nation,” she added.

The ruling of the arbitral tribunal in The Hague, Netherlands upheld the Philippines’ sovereign rights over its 200-nautical-mile exclusive economic zone under the United Nations Convention on the Law of the Sea. (PressONE.ph)