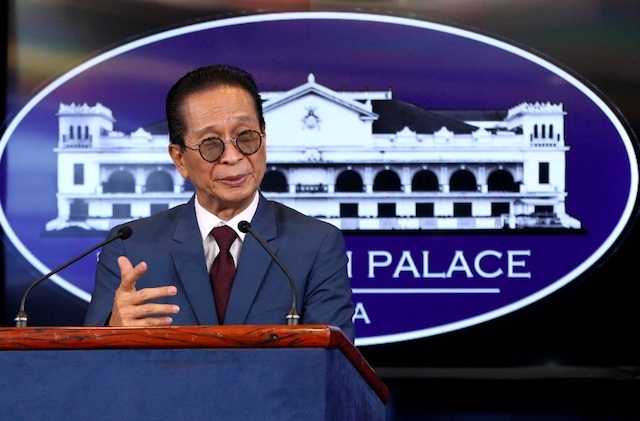 In a press briefing, Palace spokesman Salvador Panelo said Duterte reached the agreement with Chinese President Xi Jinping in one of their bilateral meetings.

Asked if “we should be fine with Chinese fishermen exploiting our EEZ,” Panelo said: “Well, that’s part of the agreement of the President in order not to trigger any armed conflict between the two sides.”

Panelo clarified that the agreement was not an unwritten one.

“Don’t forget that bilateral meetings are recorded, so we have a record of that agreement,” he said.

“It is not also true that the President did not make known of that agreement because the Secretary of Foreign Affairs made certain announcements with respect to that, relative to the fishing in the Scarborough (Panatag Shoal),” he added.

Panelo also responded to allegations, made by critics such as Senior Associate Justice Antonio Carpio, that Duterte violated the Constitution which reserves the country’s 200-nautical-mile EEZ for the use of Filipinos.

He said the safety and lives of Filipinos should take precedence over protecting the EEZ.

“The provision of the Constitution protecting the natural resources and marine wealth which is found in Section 2 of Article 12 of the Constitution, while apparently at first glance bestows upon the Filipino people favorable preferences as regards to the nation’s wealth, is actually designed to safeguard their very existence and survival because in the hierarchy of rights, the right to life takes precedence over the right to property. That is precisely why the Section 4 of Article 2 says, ‘The prime duty of the government is to serve and protect the ‘Filipino people’ in reference to the lives of the Filipinos,’” he said.

The verbal tussle stemmed from last month’s ramming of a Filipino fishing boat by a Chinese vessel near Recto Bank, a resource-rich area within the EEZ and close to the Kalayaan Islands.

Philippine sovereign rights the area were upheld in a 2016 ruling by the Permanent Court of Arbitration in The Hague, based on the 1982 United Nations Convention on the Law of the Sea. China, however, did not participate in the arbitration and refuses to honor the decision.