NOT A REVOLUTION: According to frontliners, they only ‘sounded off PH’s distress signal’ with plea 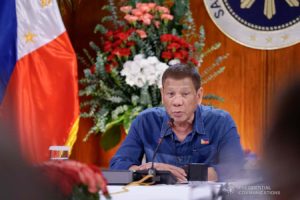 President Rodrigo Roa Duterte talks to the people after holding a meeting with the Inter-Agency Task Force on the Emerging Infectious Diseases (IATF-EID) core members at the Malago Clubhouse in Malacañang on August 2, 2020. KING RODRIGUEZ/PRESIDENTIAL PHOTO

President Rodrigo Duterte on Sunday night lambasted frontliners for allegedly going on a public “outrage” against his administration instead of asking for a private meeting.

Duterte heeded the medical workers’ plea for a two-week modified enhanced community quarantine in Metro Manila and nearby areas and said the government had not forgotten their efforts, but went on a rant against them immediately after.

“There would not have been no need for you to go into a — itong ganito. And raising your hands as if sabihin ninyo revolution, revolution. Now, if you think that this can be solved by revolution, then by all means, we start it. Mas gusto ko. Kung magsabi kayo, nagtaas na kayo, revolution, revolution, go ahead because I would be calling all people who love their country to come forward and work for the people,” the president said. 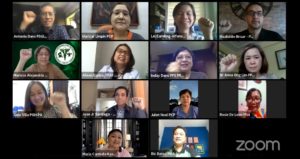 ‘PARA SA BAYAN’: Doctors raise their hands during a photo op at the end of their 90-minute Zoom call which addressed their need for a ‘time-out’ amid the Covid-19 pandemic.

Duterte added that there was no need for the doctor groups to publicly tell his government what to do. “You could have just [written] us a letter,” he said.

“[D]o not try to demean government. You are not actually criticizing. You demean… your own government by just going ahead, at saka takutin ng revolution. Bayan man natin ito. Gusto ninyo sirain natin? Start it now,” Duterte said.

“Huwag ninyo akong parinigrinigin ng revolution. Naku, Diyos ko. Iyan ang mas delikado sa Covid. Eh kung mag-revolution kayo, you will give me the free ticket to stage a counterrevolution. How I wish you would do it,” he continued.

‘Sounding off a distress signal’

However, in the letter of the Philippine College of Physicians (PCP) submitted to Duterte, Health Secretary Francisco Duque III and National Task Force Chief Implementer Carlito Galvez, doctor groups merely pleaded for “reconsiderations” and a “time-out.”

“Healthcare workers are united in sounding off a distress signal to the nation – our healthcare system has been overwhelmed,” the first line of the doctors’ letter read.

“[W]e are waging a losing battle against Covid-19 and we need to draw up a consolidated, definitive plan of action…. We propose that [a two-week enhanced community quarantine] be used as a ‘time-out’ to refine our pandemic control strategies,” it continued.

The pleas in the letter, including an appeal for the government to reconsider its easing of restrictions on gyms, internet cafes, pet grooming services and the like, were also discussed in a 90-minute long Facebook live video of PCP.

Key Cabinet members and Covid-19 task forces met with several representatives of medical frontliners in a meeting over the weekend.