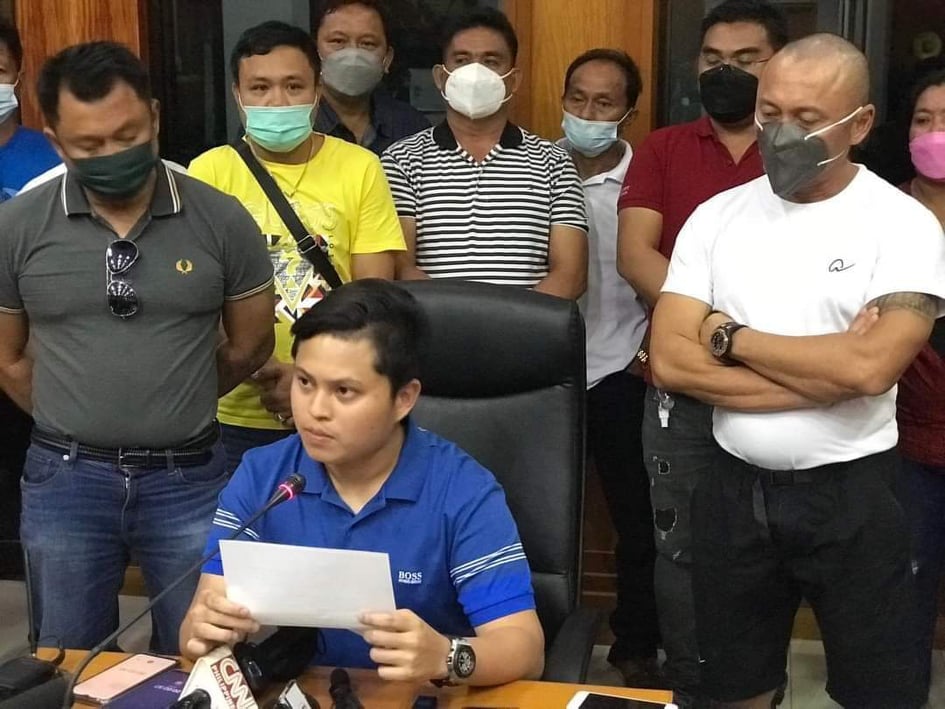 Negros Oriental board member Kurt Matthew Teves announces his resignation from the Provincial Board Wednesday, March 23, 2022, to face allegations hurled against him.  He is flanked by his father, congressman Arnie Teves (right) and uncle, Bayawan City mayor Pride Henry Teves (left). (HEADZ UP NegOr)

Negros Oriental ex-officio Board Member Kurt Matthew Teves has resigned from his post public service after being involved in an alleged mauling of a security guard in a posh subdivision in Metro Manila last week.

Teves, chair of Barangay Malabugas, Bayawan City made the announcement on Wednesday, March 23, while being flanked by his family led by his father reelectionist 3rd district Rep. Arnolfo “Arnie” Teves Jr., uncle and gubernatorial aspirant Bayawan City mayor Pride Henry Teves, and his allies and supporters.

“I must respectfully resign from my office as a public official while I face this problem and give time to reflect,” said Teves, who is also the president of the Negros Oriental Association of Barangay Captains (ABC). .

Jomar Pajares, BF Homes Parañaque security guard, alleged that Teves mauled him after the latter was refused entry to the subdivision.

The alleged mauling was caught by the subdivision’s CCTV camera and has since gone viral. Pajares has feared for his life and is now in protective custody, report says.

“What happened is already done,” Teves said.”Whatever the exchange of words were, I was wrong to lay my hand on him. For that, I offer my sincerest apologies!”

On Tuesday, GMA News reported that Teves’ elder brother, Axl, first reached out to Pajares to ask for forgiveness.

Pajares, however, responded in a separate report that he is willing to forgive the younger Teves but insists he will press charges.

“This incident is entirely on me. No one else, no one else! I am the one involved in this incident and I should be the one to face it. I am ready to do so. If this reaches the court, I am willing to face and respect their decision,” Teves said in a mix of English and Bisaya.

Farah Gentuya, Negros Oriental provincial director of the Department of Interior and Local Government told PressOne.ph that the position vacated by Teves will be filled up by natural succession from the barangay, as ABC president of Bayawan City, and as ex-officio member of the provincial board. – Ryan Christopher J. Sorote