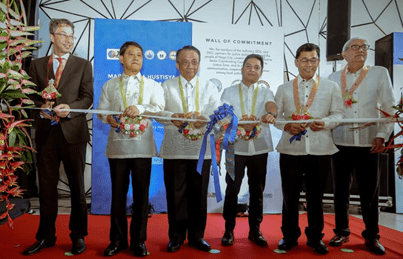 A strong supporter of justice in the country, the European Union (EU) hailed the recognition of Naga City as a “Justice Zone”.

The Justice Sector Coordinating Council (JSCC) through Joint Resolution No. 05-2019 signed on Aug. 15, 2019, identified Naga as a Justice Zone area wherein local justice advocates, such as the law enforcers, prosecutors, judges, public attorneys and managers of detention facilities; act as one in pinpointing and resolving justice-related concerns.

Chargé d’Affaires of the European Union Delegation to the Philippines Thomas Wiersing said, “The establishment of Naga City as the newest Justice Zone demonstrates how the justice sector in different parts of the country is committed to accelerating much-needed reforms.”

He added, “with Justice Zones across the country emerging fast, we hope that they can be a springboard for a more efficient justice system throughout the country.”

The recognition is the result of the city’s implementation of programs which display converged justice efforts, such as jail and court decongestion, the adoption of an electronic court system, endorsing peace and order, and public service that is competent and adequate.

As these programs have enabled Naga to promptly integrate with justice sector agencies, it is in line with the Governance in Justice (GOJUST) thrust of the European Union which pushes for faster coordination and collaboration in the country’s justice sector.