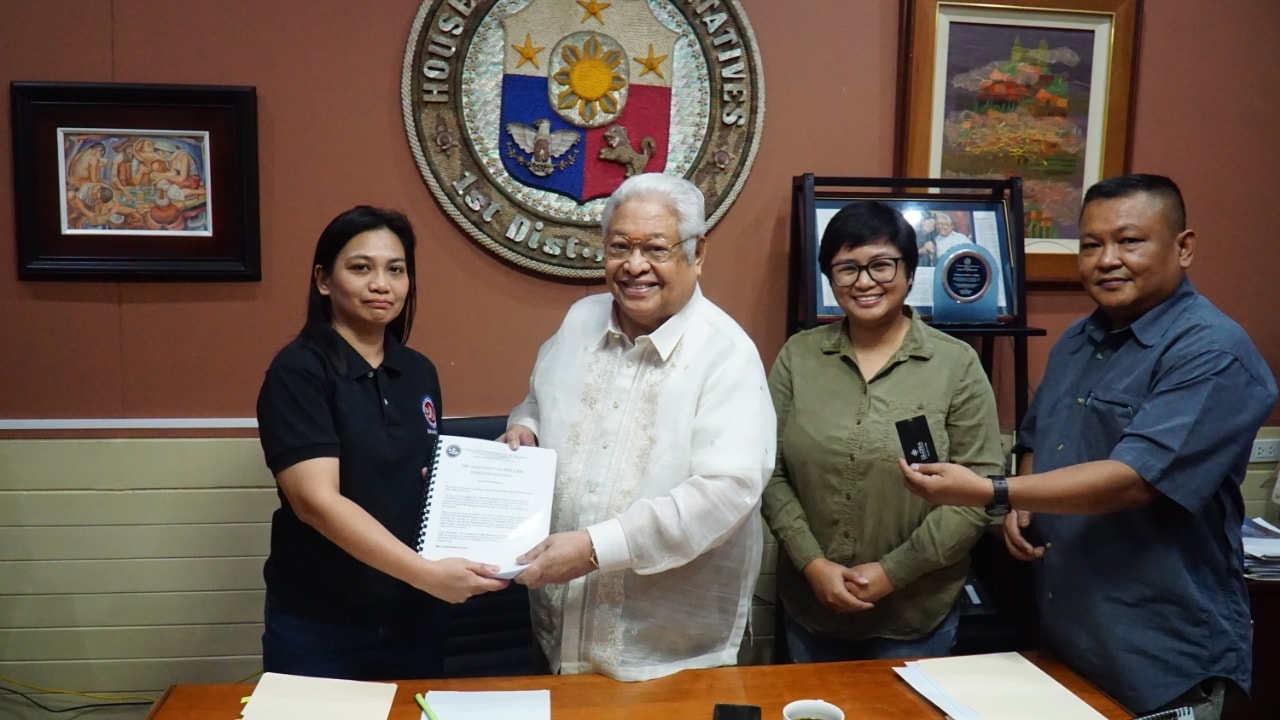 Albay 1st District Rep. Edcel Lagman (2nd from left) receives from representatives of the National Union of Journalists in the Philippines, copies of the petitions to renew ABS-CBN’s franchise (Photo from NUJP)

Various groups have come forward to express their support for the franchise renewal of broadcasting giant ABS-CBN.

The National Union of Journalists of the Philippines (NUJP) submitted to the House of Representatives on Wednesday, Feb. 19 an initial list of petitioners calling for the renewal of ABS-CBN’s franchise.

Albay 1st District Rep. Edcel Lagman and Bayan Muna party-list Rep. Carlos Zarate received the list and the flash drive containing the digital signatures of those who signed the petition in change.org from NUJP. Lagman and Zarate represented the House legislators who authored the 11 bills for the franchise renewal.

The partial list contains 200,000 signatures from petitioners all over Metro Manila gathered through on-the-ground signature collection by various organizations, alongside NUJP’s campaign on change.org.

The Kapisanan ng mga Brodkaster ng Pilipinas (KBP) reiterated its support for ABS-CBN, promising support for the network and other KBP members knowing it is “for the best interest of the public.” The broadcasters’ association said in a statement that it works “hand in hand” with the KBP members in upholding broadcast responsibilities and initiating industry reforms.

The KBP also said that 45 broadcasting franchise applications have been enacted into law, while nine have been approved by the congressional franchise committee. It added that Congress’ history of approved franchise renewal applications gave hope that ABS-CBN would get a new franchise.

KBP’s statement was released after President Duterte led the oath-taking of the association’s newly elected officers and board of trustees where the president hailed the “vital role” of media in the country, even after Solicitor General Jose Calida filed a quo warranto petition before the Supreme Court to void the franchise of ABS-CBN.

The Foreign Correspondents Association of the Philippines (Focap) also denounced the Solicitor General’s petition asking Congress “to act independently” and the Supreme Court “to side with the people’s right to truthful and independent news, the Constitution and democracy.”

“Our ABS-CBN colleagues have been on the frontlines of every major breaking news in the country. They have chronicled history, and continue to hold power to account,” Focap said.

​Business groups also threw in their support behind the beleaguered broadcast giant.

In a joint statement, the Institute of Corporate Directors, Institute of Solidarity in Asia, Makati Business Club and the Management Association of the Philippines called on the legislators to hold a “balanced, fair and timely” deliberation on the franchise of ABS-CBN.

“We fervently urge Congress to judiciously address any issues raised against the company while taking serious account of the bedrock issues of media freedom and free enterprise, which allow businesses to flourish for the overall welfare of our economy and our people,” the statement read.

The Philippine Movie Press Club (PMPC) voiced their concern over the adverse effect the non-renewal of the broadcast network’s franchise to the livelihood of its 11,000 employees. 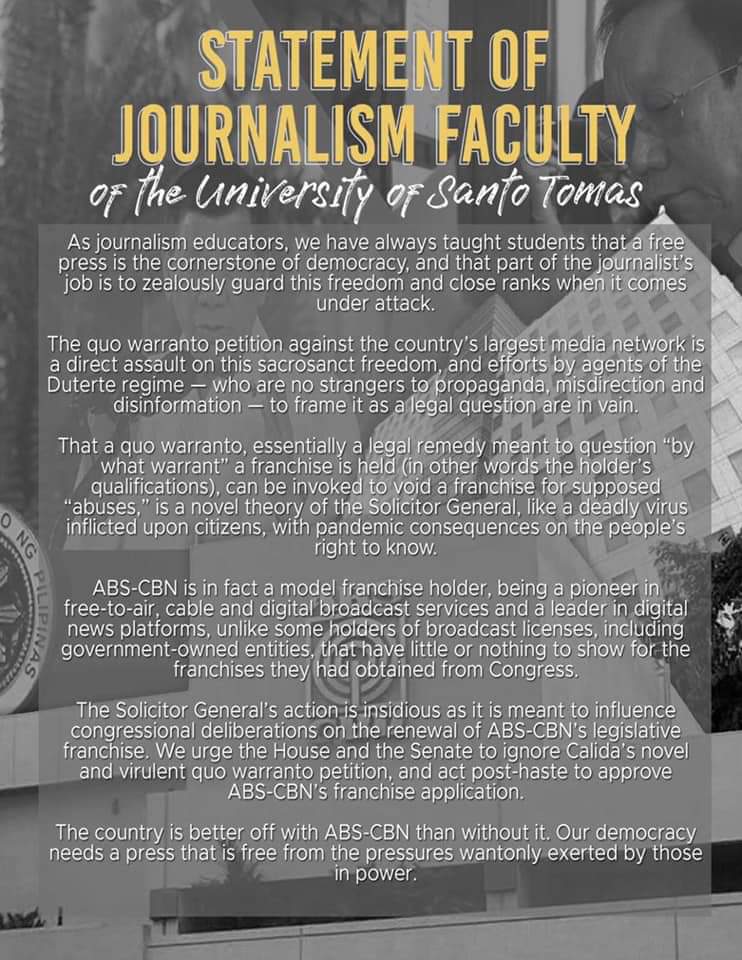 Statement of the Journalism Faculty of the University of Santo Tomas

The University of Santo Tomas (UST) in a statement extend its support to ABS-CBN, which it called a “media partner.”  It also noted how the network had won numerous awards for its entertainment, news, and public service programs in the university’s USTv Students’ Choice Awards.

“We offer our prayers for the network to be able to renew its franchise, and we are one with them in their commitment to continue their service to the Filipino people and the global community,” the statement read.

UST’s statement came after its journalism faculty called Calida’s quo warranto petition an “insidious action” and a “direct assault” on the freedom of the press.

“As journalism educators, we have always taught students that a free press is the cornerstone of democracy, and that part of the journalist’s job is to zealously guard this freedom and close ranks with each other when it comes under attack,” the UST Journalism professors said.

The professors said ABS-CBN was a “model franchise holder” noting how the broadcast giant was a pioneer in the broadcast industry, while also hitting other broadcast licenses holders, including government-owned broadcast companies, that had “little or nothing to show for the franchises they had obtained from Congress.”

“The quo warranto petition against the country’s largest media network is a direct assault on this sacrosanct freedom, and efforts by agents of the  Duterte regime—who are no strangers to propaganda, misdirection and disinformation—to frame it as a legal dispute are in vain,” it added.

“The country is better off with ABS-CBN than without it. Our democracy needs a press that is free from the pressures wantonly exerted by those in power,” it concluded.

The House of Representatives Committee on Legislative Franchises has yet to conduct a public hearing on at least one of the 11 bills filed seeking to renew ABS-CBN’s franchise and extend it for another 25 years.

President Rodrigo Duterte has repeatedly vowed in the past that he would not sign any bill seeking to renew the franchise of ABS-CBN, claiming the network allegedly failed to air his 2016 presidential campaign advertisements and did not return the payments.